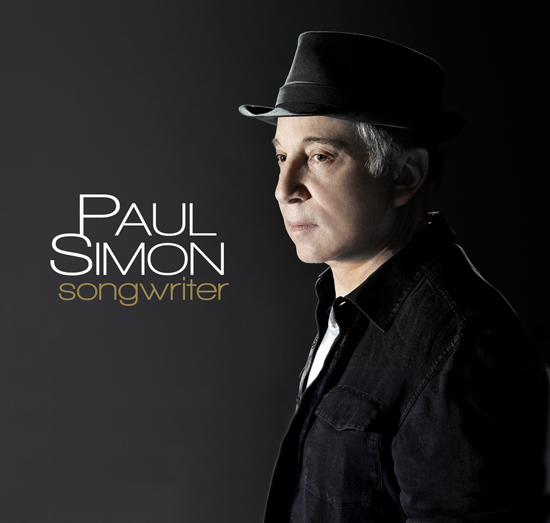 Check out this great interview with Paul Simon, conducted by music journalist Tom Moon, who wrote the liner notes to Simon’s upcoming double-disc Songwriter collection. Read our own cover story on Simon here.

When you look at the whole of your work as a songwriter, do you see large themes that characterize it or maybe distinct musical ideas that define certain eras?

I don’t see large themes that span my songwriting career, unless it’s the story of my life. There are the usual song subjects: love songs, family, social commentary, etc. And, of course the changing perspective of aging. I think you could look at my work as divided into three distinct periods: Simon and Garfunkel, pre-Graceland solo albums and Graceland to the present.

People often point out the amount of God or religious references and it’s true they’ve been there since the early writing. Mrs. Robinson’s “Jesus loves you more than you will know” and so forth through “Hearts And Bones” and certainly the last group of songs on So Beautiful Or So What: “Love Is Eternal Sacred Light,” “Questions For The Angels” and “Love And Hard Times.” So, maybe there’s a certain amount of spiritual seeking that could be seen as a thematic. But just as often the references are skeptical—”I Don’t Believe”—or mocking as in the first two verses of “Love And Hard Times.”

It seems when people discuss your songs they focus on the lyrics—the “message.” Yet in talking to musicians, I’ve learned they are more often engaged by the musical underpinnings, the chord changes and structural details. . . In a way it’s as if your work means something different to different listeners.

Well, print critics focus more on the lyrics. It’s easier to talk about words with words than to describe melody, harmony and rhythm. Musicians focus more on the music. I’m glad. I spend more time writing music than writing words. The music always precedes the words. The words often come from the sound of the music and eventually evolve into coherent thoughts. Or incoherent thoughts. Rhythm plays a crucial part in the lyric-making as well. It’s like a puzzle to find the right words to express what the music is saying.

What was your goal with this collection?

The Songwriter albums (Can you still call them albums?) are a collection of the best, or anyway, my most typical song-thinking. I left off some good ones—”You Can Call Me Al”, “Mrs. Robinson,” “The Late Great Johnny Ace”—but I tried to include songs that weren’t hit singles as well as the better known songs. I don’t always like the hits and I don’t usually pick the singles. That’s record company territory.

What’s the biggest change since Simon and Garfunkel?

The biggest change post-S & G? I guess the most obvious thing is I wasn’t writing for a duo anymore. That’s liberating in and of itself. It freed me to write more rhythm songs. S & G were a great ballad act, with Art’s uniquely beautiful tenor and the blend of our voices. Well, there was “Mrs. Robinson” and “Cecilia” too, but mostly we were known for “Bridge Over Troubled Water,” “The Sound Of Silence” and “The Boxer.” My first songs after Art and I broke up were”Mother And Child Reunion” and “Me And Julio Down By The Schoolyard.”

There were indications of your interest in music from other cultures before “Mother And Child” on the Bridge album.

I guess “El Condor Pasa” would be considered an early example of “world music” with its Peruvian melody and South American musicians playing traditional instruments. And “Cecilia” had a kind of African groove to it. We made that up on a home recorder. 4/4 with no backbeat on 2 and 4. Some of the early rock ‘n’ roll songs that I most admired, “Mystery Train” and “Bo Diddley” had no backbeat. I love those rhythms.

One distinction that this collection makes clear is that there’s a difference between outright political songs and songs that offer a window into our culture. You see yourself as more of a cultural commentator. . . and some of the lines in your songs—”Where have you gone Joe DiMaggio”—have actually become part of pop culture.

I don’t write overtly political songs, although “American Tune” comes pretty close, as it was written just after Nixon was elected. Writing good political songs or so-called “protest songs” is its own art form. When I write about politics it’s usually part of a song, maybe a verse or two rather than the whole thing. Many of the songs, the ones that aren’t story songs, change subjects as often as any internal conversation does. Our minds flit from topic to topic all the time. I write like that.

You have always been surgically precise with words. What’s the most important element in your lyric writing?

I guess clarity is the most important thing, although mystery is pleasurable too. The first line of a song is crucial. Listener attention is probably highest at the first line. I try to make those words interesting enough to keep the listener interested.

Like “I met my old lover on the street last night.”

Yes, a quick image that tells a story or asks a question.

After I died and the make-up had dried

I went back to my place

The Mississippi delta was shining like a National guitar

What have critics and listeners missed in your work?

Not much. Well maybe some of the jokes. I tend to be seen as a serious kind of person and that’s not really the case. Every album has songs with humor tucked into the stories.

What were some of the lessons from Graceland and Rhythm Of The Saints?

The most important lessons were about rhythm. I had to really concentrate to hear what was happening rhythmically in the drums, guitar and bass. African and Brazilian music is different from American pop; related but still worlds apart. It was also important for me to learn how to make the tracks first and write the songs later. I’d done that a few times in the past—”Cecilia,” “Late In The Evening,” “Mother and Child Reunion” —but never whole albums like Graceland and Rhythm. My usual way of composing was to sit with my guitar and write the song, then I’d bring it to the musicians in the studio and we’d work out an arrangement. Graceland reversed that process. I changed the way I made records for the next twenty years. Until So Beautiful Or So What.

Another thing I learned in the Graceland/Rhythm Of The Saints recordings was how to collaborate with players from other cultures. Some didn’t speak English or speak in musical terms that I was familiar with. I learned to pay attention and listen. Music is about listening.