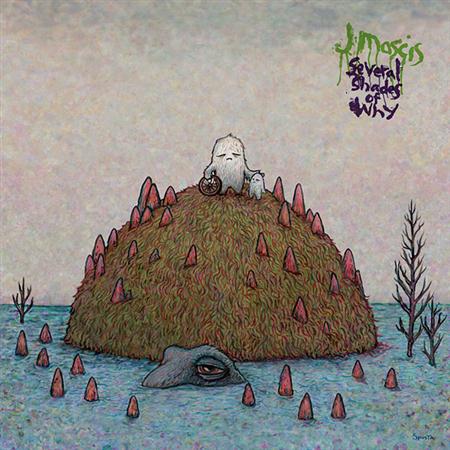 J. Mascis: Several Shades of Why Anyone familiar with Dinosaur Jr.’s outstanding pair of post-reunion tidal waves of distortion, speed and sheer volume in the form of records — 2007’s Beyond and 2009’s Farm — knows Dino-Jay mastermind J. Mascis hasn’t gotten soft in his, well, not old age, but extended tenure as an indie-rock elder … and reigning warlock. If anything, Farm and Beyond have proven that, whether as the slack-jawed voice of the lover-lorn slacker, or as the genre’s seminal and most enduring guitar god, Mascis is as sharp a rock composer — as hell-bent on splitting your ear-drums — and as vital a force as ever.

Still, dude’s gotta bust a chill every once-in-a-while, as evidenced on Mascis’ latest release Several Shades of Why — a stripped down acoustic affair that, while not markedly different from his Dino work in terms of songwriting, lets listeners who can’t discern the sonic subtleties of his writing past his band’s cacophony an opportunity to hear what those who can are enjoying.

Even without his electric axe (and accompanying pedal board and crater of Marshall stacks) Mascis is still a virtuso. That’s by no means surprising, but it still makes this record an eye-opener — feeling revealing, yet oddly familiar, in that you can take almost any one of the album’s ten tracks and immediately hear it’s full-band, rocked-out arrangement in your mind’s ear.

Here, the dense walls of distortion are traded for beautifully layered tapestries of acoustic guitar lines. While most of them sound like they could just as easily live all over the next Dino record, the notes that glisten and breathe, out from under the weight of mountainous distortion — as on the title track — confess and spotlight a tenderness that was just a nuance of his Dino work, conveying all the vulnerability that’s buried beneath the band’s barrage of noise. Mascis’ melodies are still essentially the same straightforward motifs, delivered with his trademark, slow-drawn moan. But here, when applied to a mournful ballads like “Is It Done?” or “Too Deep” — which recalls his hero Neil Young at his most wistful — what once resonated as an emotionally detached affect, sounds stirring and engaged.

While there’s the complimentary pulse of some percussion here, an accompanying fiddle there, and the occasional electric guitar flourish (and, yes, a couple extended solos) — in addition to some BGVs courtesy of Band of Horses’ Ben Bridwell and Broken Social Scene’s Kevin Drew — this, overall, is a pretty economical record, on which Mascis strips himself down to his bare elements to find that the real power in his work is as much in the writing as it is in the presentation.