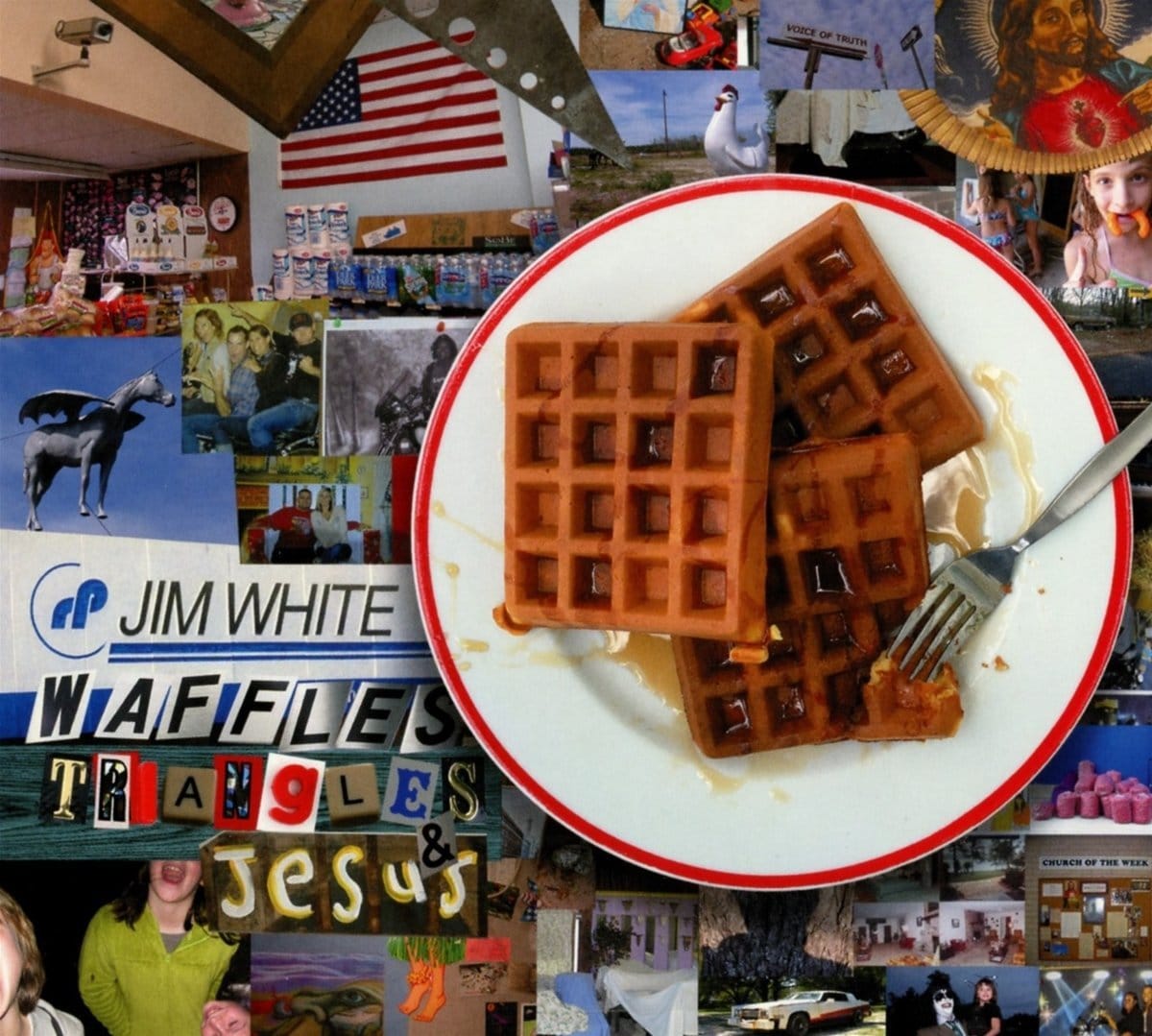 Jim White
Waffles, Triangles & Jesus
(People In A Position To Know Recordings)
Rating: 4 out of 5 stars

Jim White’s 1997 Wrong Eyed Jesus debut presented the world with a wildly eclectic, some might claim eccentric, musician who occasionally sounded like Tom Waits deconstructing and rebuilding the music of the South. It was an auspicious, ambitious introduction, alternately attractive and creepy, that seemed nearly impossible to follow up. But the creative White never stopped. Four genre-pushing, impossible to pigeonhole albums later– a few with obtuse, humorous titles such as 2007’s Transnormal Skiperoo along with Drill a Hole in the Substrate and Tell Me What You See from 2004– he’s still at it. This one, with its similarly confusing title of Waffles, Triangles & Jesus (all three are featured prominently on the front cover’s fascinating photo collage), continues that trend.

The multitalented White (he’s also an artist, producer and author) joins with songwriter Mike Pratt (his alias) to co-compose another diverse set of tunes that shift, sometimes significantly, in musical and lyrical directions. The mellow banjo strains of the ghostly opening “Drift Away” (not the Dobie Gray hit) that gradually builds in tension and volume with its militaristic beat, the epic, near-Celtic “Long Long Day” and the bouncy, sly country honk of the “Nashville Cats”-styled “Playing Guitars” prepare you to expect the unexpected. And that’s just the first three tracks.

White’s a gifted musician — he’s credited with flute, melodica, keys and percussion along with banjo, slide banjo and guitar—yet he utilizes the talents of the Dead Rock West duo along with trumpets, pedal steel, cello and violins to bolster, but never overwhelm, the sound. White wades into the jazzy, swamp for the percussive and intense “Prisoner’s Dilemma” which follows a jailed criminal who responds to criticisms of his lifestyle with, “That’s just what the good Lord made me,” all against a throbbing backbeat and driving piano lines.

We time travel back to Andy Griffith’s Mayberry for “Ernest T. Bass Finds the Woman of His Dreams,” a corny if engaging slice of Hee-Haw inspired fluff. Cicada Rhythms’ Andrea DeMarcus spars with White, who plays the part of Bass on this charming bit of hokum you’ll be grinning at, and returning to, for its sweet simplicity. White whispers/talks through the jaunty, banjo led “Wash Away a World,” a twisted yet hummable piece of standup bass infused, fiddle enhanced gospel with lyrics that describe waiting for a storm to wash away this planet. It won’t be on the musical agenda for any church service you’ll likely attend.

The closing “Sweet Bird of Mystery,” is a loving, somber musical letter to his infant daughter, meant to be read by her after his passing. It’s a tender, melancholy and beautiful song, arguably White’s finest, most personal composition. That track is a lovely, even poignant way to close another in a series of endearingly quirky albums from one of Americana’s most intriguing and unconventional artists.