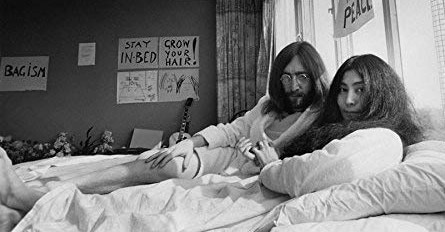 John Kruth is a songwriter-musician-writer and author of many books on music. Since he’s in the midst of completing his latest book, Hold On World -The Lasting Impact of John Lennon & Yoko Ono’s Plastic Ono Band – 50 Years On, due this summer from Rowman & Littlefield, we asked him if there’s anything he learned about John and Yoko we might not know.

There was. Here are five of them.

Yoko Ono once described her father, Eisuke, as an emotionally stunted man, incapable of recognizing or complimenting his daughter’s creativity. Taking out his personal frustration over abandoning his own dream of becoming a concert pianist in order to satisfy his father’s dying wish that he pursue a career in finance in order to properly provide for his family, Eisuke traumatized Yoko. He measured her fingers and bluntly informed her that she should abandon all hope of pursuing a professional musical career as they were too small to properly play the piano.

When Yoko explained her dream was to become a composer, Eisuke stonewalled her again, replying it was impossible for a woman in Japanese society to achieve such a goal, suggesting she might consider becoming a singer. To her surprise he offered to pay for vocal lessons. Years later, Yoko expressed her gratitude, pointing out that her father was more progressive than most Japanese men. Eisuke didn’t expect her to get married and have children and eventually encouraged and helped her attain her career goals.

2. Around the Mulberry Bush

The 1997 Rykodisc re-issue of Lennon/Ono’s experimental album Unfinished Music No. 2: Life with the Lions included two bonus tracks. These include the hauntingly lovely “Song for John” featured Yoko singing to John’s gently fingerpicked guitar (played in a similar style as “Dear Prudence”). “We’ll have our wings and the wind will be with us,” Ono assured her lover in a soft, breathy voice, evoking the fleeting images and emotions of a bleak, windy afternoon. The second is “Mulberry,” (arguably the album’s most important track after “Cambridge 1969”), which inexplicably remained unreleased for twenty-nine years. Had it been included in the album’s original playlist the piece might have helped many of Lennon/Ono’s disillusioned fans gain a greater understanding of their contentious collaborations.

Inspired by her family’s days in exile following the bombing of Tokyo, Yoko recalled the experience of being a young girl, alone and cold in the countryside, picking berries “from the mulberry bush so that I could feed my younger brother and sister and myself.” Yoko’s pathetic whimpers and cries were meant to evoke that she was “feeling a bit frightened because [the local farmers] said there were many ghosts in the field.”

The track features some of John Lennon’s most innovative and playful guitar improvisation ever recorded, as he employs a slide, while tapping the strings and thumping on the instrument’s body, creating a rhythmic foundation for his wife’s keening vocals.

The rough demos of “I Found Out” (for John Lennon’s Plastic Ono Band) Lennon previously recorded in California during the summer of 1970 are nothing short of a revelation. John relentlessly pounds a bluesy A7 chord on a tremolo-soaked National steel guitar, as he repeatedly accented his coarse voice with a series of slashing slide riffs. The swampy groove is straight from the Bayou, reminiscent of “Green River,” by Creedence Clearwater Revival, one of the few bands Lennon publicly praised at the time for their gritty, no-frills roots rock. John’s voice sounds positively tortured, more akin to the feral howl of the street-singing holy blues man Blind Willie Johnson, than his sweet, melodious vocals heard on the Beatles’ records. While the rawness of “Cold Turkey” both surprised and alienated some fans, this was John Lennon sounding thoroughly possessed, with the same “hellhound on his trail” that once stalked Mississippi bluesman Robert Johnson.

There were actually two versions of “Hold On” (from Lennon’s Plastic Ono Band) The original recording, released on the album was a gentle, lilting ballad, that John initially tracked as an instrumental, playing a tremolo-laden guitar, with solid support by bassist Klaus Voormann and Ringo Starr on drums. Needing to concentrate on his guitar performance, John laid down a guide-track vocal, singing gently only on the chorus. But as the tune ends, the band impulsively breaks into a loose bluesy boogie. Lennon’s lead guitar slips and slides, while Voormann walks a syncopated bass line over Ringo’s bubbly shuffle. John, in one of the album’s more playful moments, calls out “Hold on John…. Hold on Yoko!”

The original medley of the two-part “Hold On” clocked in at 5:01. While an interesting bit of studio spontaneity, this lost track reveals that the sessions for Plastic Ono Band had not been a solely angst-ridden affair.

Although he claimed to no longer “believe[d] in Elvis,” John and the band, between takes, joyfully jammed on both “That’s All Right Mama,” and “Hound Dog,” along with a foot-stomping cover of Carl Perkins’ “Honey Don’t,” while Phil Spector saturated his vocals in Sun Records-style reverb, and Klaus walked a punchy gangster bass line, in the style of the great Chicago bluesman, Willie Dixon .

Fumbling the guitar riff, John, suddenly broke into a gargled version of “Don’t Be Cruel,” resounding like one-part comedy and one-part desecration. A steady rockin’ version of “Matchbox,” was propelled by Starr’s thudding drums. The band came together nicely as John drilled a fuzzy lead guitar until suddenly losing interest or patience and dropping the jam in mid-flight, dismissing the old-school music with an indifferent “Okay…” A loosey-goosey take of Perkins’ “Glad All Over,” (which the Beatles once covered back in 1963, at the Cavern Club, with George on vocals) seemed ironic in contrast to the severity of the rest of the album.

By September 1972, Lennon/Ono’s crusade to save the world bordered on parody when they appeared on the annual Lewis Labor Day Telethon for muscular dystrophy. In a totally deadpan introduction, Lewis, introduced Lennon/Ono as “two of the most unusual people in all the world, and I don’t mean just in the world of entertainment. They fit no patterns, meet no standards, except the standards of excellence.” (Some might claim the madcap host was being gratuitous regarding Yoko’s limited ability as a pop singer). While Ono’s performance was both sincere and enthusiastic, it was clearly far overshadowed by John’s reading of “Imagine.”

As a concept/performance artist, Yoko lacked the basic vocal skills and timing, expected to any pop singer. This is not to say she didn’t produce some stunning musical moments throughout her career, but the more she relied on traditional Western music forms, the less daring her music became. While Ono’s message of peace and equality in “Now or Never,” was clear, her shaky vocal delivery ultimately caused the song to fall upon deaf ears.

Next up was Lennon’s “Give Peace A Chance.” Dispensing with the various controversial lyrics within the song’s free-associative proto-rap verses, Elephant’s Memory repeated the song’s chorus ad nauseum as John sang “All we are saying is give peace a chance!” peppered with shouts of “Send your money, money, money, money,” in time to the band’s rhythm. “C’mon, sing!” John yelled at the audience, while he and Yoko chanted a litany of slogans from “No more war! “Save the children,” “Peace for everybody!” to “Vote! Vote! Vote!” Adding to the surrealism of the moment, Jerry Lewis leapt into the fray, fingering an inaudible pocket trumpet (similar to the instrument jazz trumpeter Don Cherry once played with the Ornette Coleman Quartet).

Levi Robin Premieres New Video for “No Other”

0
As someone with a life that has been full of wandering and adventures in search of seeking a fruitful life,...
Read more
Home Featured Post

0
Stepping out on your own takes a giant leap of faith. Musician David Myhre, known for lead guitar work with Tanya Tucker...
Read more