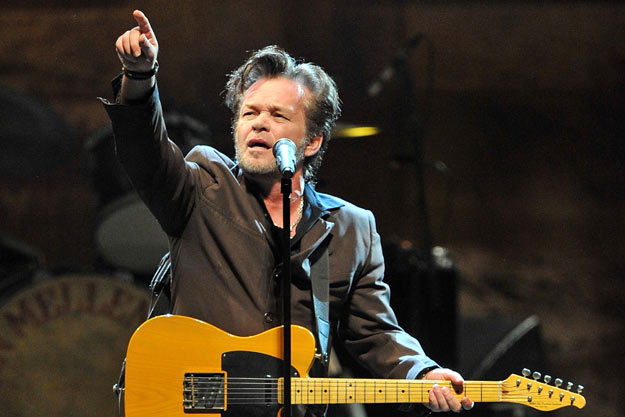 Behind the Song: John Mellencamp, “Jack And Diane”

It may have been just a “little ditty,” but “Jack And Diane” sure did big things for John Mellencamp. It went to #1 for four weeks in 1982, turning Mellencamp, 31 years old at the time and then known as John Cougar, into an overnight sensation.

Of course, he had been kicking around for years before that monumental hit off American Fool, but it wasn’t until then that he tapped into his true strength as a songwriter: Giving a voice to simple people from the so-called Heartland of America, detailing all their short-lived victories and hard-luck defeats. And what better way to begin that process than by chronicling young romance?

This wasn’t chaste stuff, by any stretch. Mellencamp’s hero, Jack, has other things on his mind than holding hands at the prom, telling Diane to “Dribble off those Bobby Brooks/Let me do what I please.” As for Diane, calling her a debutante seems sarcastic at best, since her society debut comes in the backseat of Jack’s car.

Much of the credit for the song’s success lies in its music and production. There are hooks galore, and the song is balanced beautifully between the sweetly nostalgic acoustic section and the cathartic electric guitars in the instrumental portions. And don’t forget those hand claps, which were originally used in the studio so the players could keep time but were wisely kept in the finished product to memorable effect.

Yet the song’s ultimate calling card is Mellencamp’s heartfelt identification with his protagonists. He has always imbued his songs with a great sense of time and place by including telling details. In the case of “Jack And Diane,” those details include the Tastee Freeze, a chili dog joint where the two characters waste away the hours of the lazy summer afternoon.

At the time of the song’s release, Mellencamp told the L.A. Herald Examiner, “Most people don’t ever reach their goals, but that’s cool too. Failure’s a part of what you’re all about anyway. Coming to terms with failed expectations is what counts.” Or, to put it more succinctly, “Life goes on/Long after the thrill of livin’ is gone.”

John Mellencamp has never been entirely comfortable with the level of fame afforded him by this song. He has complained about never wanting to be a pop singer and has changed his name more than anybody but Prince. That ambivalence is probably because he always felt closer to the hardscrabble characters that populate his songs than he ever felt to stardom. Such authenticity is the reason why “Jack And Diane” resonates so loudly nearly 40 years after those two teenagers rocked and rolled off into the sunset.