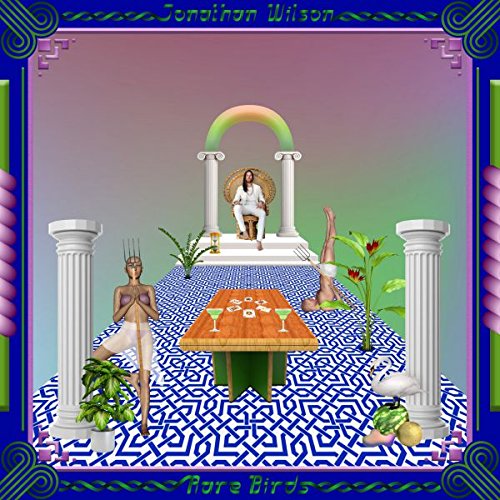 Some artists find that scaling back or stripping down their music, both figuratively and literally, brings them closer to a purer sensibility. Jonathan Wilson is not one of them.

As the producer of all of Father John Misty’s extravagantly conceived albums and band leader for Roger Waters’ larger-than-life tours, it’s obvious that Wilson doesn’t do things in a small way. That includes his own solo work, of which Rare Birds is his third release and first in five years. It’s a multi-layered, sprawling project with 13 songs that unspool over nearly an hour and 20 minutes. The double album length is shoehorned onto one disc but each expansive and overdubbed track is so full and rich, it’s unlikely you’ll want to hear it all in one sitting. Better to spread it out, find quality headphones and dive into this overflowing pool with time and patience. Even the gorgeous, colorful, high-gloss packaging with a hefty 32-page book that includes full lyrics and credits, is elaborate and detailed.

But Wilson, wearing his producer hat, keeps a firm grip on the proceedings, allowing plenty of space around the intricate sound. Even if his nonchalant, boyish voice isn’t particularly distinctive and some of the songs could be trimmed (only two selections are less than five minutes, another two are over eight), the music’s unhurried groove and innovative, frequently ornate instrumentation keeps the tunes from feeling overly extended and buckling under their own ambitious weight.

Lyrically, there is a lot going on, most of it wrapped in a broken relationship. Few of the plentiful words rhyme yet that’s not immediately obvious as Wilson gradually unfolds his occasionally obtuse concepts (“Flash flood in your heated quantum temple/ Oxford circus angels are they really cueing up for petrol on the motorway?”) at a leisurely pace. Songs such as “Loving You” drift by on a dreamy subtle beat that delicately grabs the listener. The strummy, country-influenced “There’s a Light” and “Hi-Ho the Righteous,” both featuring Greg Leisz on pedal steel, help vary the vibe.

By the time the closing “Mulholland Drive” rolls around nearly 75 minutes after the album began, its stark piano and swirling strings come as an audio hug, laying the listener down, preparing them to dive back in again to absorb what was missed the first time. Rare Birds is a strikingly original, complex and inspired work, one that requires your attention and rewards repeated spins.