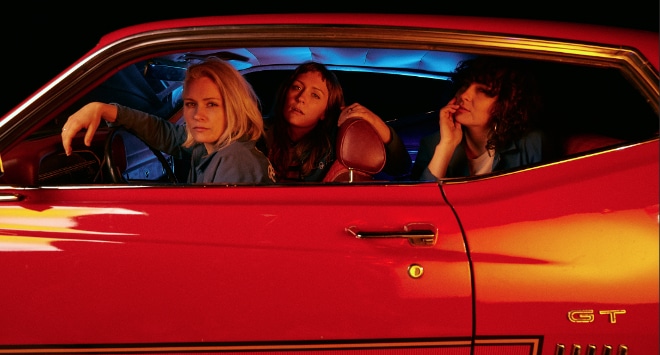 Joseph Explains Genesis of ‘Trio Sessions’ EP, Premieres “Without You”

On the final day of recording sessions for their latest LP, Good Luck, Kid, the trio of sisters that comprise the Americana group, Joseph, stayed a few extra hours to get something new on tape. The result is a five-song EP, called Trio Sessions, featuring stripped-down versions of recent songs. The soon-to-be-released collection – the first track of which, “Without You,” is premiering here – harkens back to the band’s early days playing secret shows in Northwest art galleries or filming stirring music videos just the sisters and a guitar.

The genesis of “Without You,” a startlingly sung entreaty, began with a Nashville writing session with country musician and Leagues front man, Thad Cockrell, which began by Cockrell fixing the members of Joseph – Natalie Schepman and twins Allison and Meegan Closner – a “gorgeous gluten-free pancake breakfast” upon their arrival to his studio.

The home-cooked meal sparked something in the group, Natalie said.

“It was a golden morning,” she told American Songwriter. “Thad is from the South and there was just something in the air. We were enjoying our breakfast together and then we started writing. But his approach to writing a song was terrifying. He didn’t want us to write anything down.”

So, the trio began singing and “Without You” was born. The theme of the song, which features the band’s signature blissful harmonies, is loneliness – or, perhaps more precisely, attempting to avoid loneliness. The track, just three voices over a strummed guitar, culminates with a soaring refrain, “I don’t want to be alone – without you!”

That the idea of connection is central to the tune makes sense. That theme can be found in a great deal of the sisters’ work. After all, the band’s second record is titled, I’m Alone, No You’re Not, and the group’s lead single from their latest album, “Fighter,” is all about struggling to stay together as a unit. For a band that relies on pinpoint vocal accuracy, connection – and keeping it tight – is paramount.

“’Fighter’ is about deciding to continue to do this together,” says Natalie. “So much of what the three of us process in our individual lives and as a group is in light of what we’re doing together here. We are going through a unique situation at any given point, but we’re doing it side-by-side.”

Prior to the release of Good Luck, Kid, the three sisters experienced a tumultuous altercation. The argument, which was the result of years of closeness only family members can understand combined with the rigors and stresses of being full-time musicians, almost melted the band down completely. But, resolute, the trio stuck together and forged onward.

“It’s really vulnerable to talk about,” admits Meegan. “We’re back in the saddle right now, back in the space where all of that stuff happened. But I think we are still – it’s not like it’s tied up in this pretty bow now, like we got it all figured out. So, it’s vulnerable. We’re still in the middle of it.”

Challenges of balancing public and private responsibilities amongst a trio on the rise in the music industry notwithstanding, Joseph is flourishing. Among their accomplishments was a recent performance on Late Night with Jimmy Fallon, during which, before the band went on, the host introduced the segment to a swatch of countries.

But despite the accolades, the band says they still get people – like a recent Lyft driver – who remain unaware of what they’ve done, even confused by their name. Joseph, which the sisters adopted to honor their grandfather who lived in Joseph, Oregon, can confuse some who don’t expect three women behind it.

“Why not ‘Josephine?’ he asked us,” says Allison. “And we were like, ‘Because that’s not the name of the town…’”

Band name stories aside, the ladies of Joseph say they have a “couple fun things up their sleeve” to announce in the near future, including a new video for their song “NYE,” set to drop on New Year’s Eve, and a new B-sides record.

“We’ve been on a journey,” says Natalie. “We’re reconnecting. When we wrote ‘Without You,’ I felt a personal sense of home in that room that I hadn’t felt in a while. It reminded me that I don’t want to go on without that feeling, that we want to keep it close.”