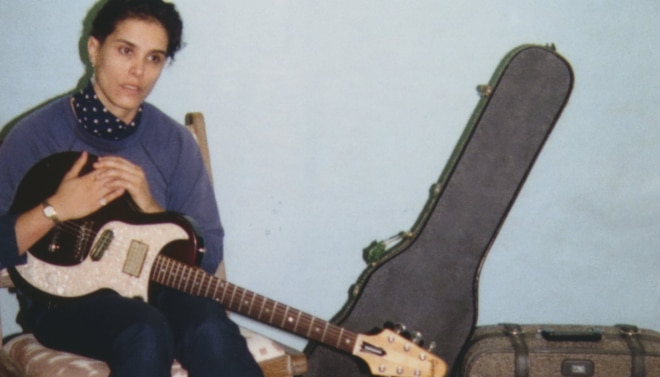 It’s hard to look away from Kera Armendariz’s gaze in the video for “Vitamin T.” The singer and songwriter, who goes simply by KERA and identifies as genderqueer, explores the connection and the importance of accepting the evolution of relationships in their latest single.

Visually, there’s a chillier, noir effect in the video, directed by Alexa Nikol Curran, which speaks to the cold, hard truth that there’s always a give and take with relationships—and some are meant to last, while others end. Shot in black and white, Kera oozes a swagger, echoing lyrics like This is what life’s worth living for / To find connections you can’t ignore / Just know you can need me.

“I wrote this song to honor my past relationships,” Kera tells American Songwriter, “and to celebrate those that have given me the tools to identify the type of support I want to give and surround myself with.”

Kera, who has described their sound as “bipolar folk,” has also performed under the moniker Kera & the Lesbians—dubbed one of the best live bands in Los Angeles with performances trance-like and raw to more bombastic. Their songs are partly a reflection of coming to terms with their identity, growing up queer in a very conservative household, and the rejection from family after coming out.

The artist’s journey through songwriting is just the beginning, as they tap into more standalone tracks that inspire, heal. They recently released their debut EP, Fall.Apart and will be working on a full-length album, tentatively scheduled for release in 2020. Earlier this year, Kera also teamed up with Devendra Banhart for the single “Bright Future Ahead,” which benefitted Trans Lifeline: Listen, an organization that provides support and resources to the trans community.

The singer also pulled together their first short film around Fall.Apart track “I’m Late,” also about a relationship lost. “Vitamin T” taps into this, yet its trajectory is a bit more layered. Lovers, friends, teachers—there’s always a lesson to be learned from any relationship.

“When I first began writing, I was thinking about the people I no longer speak to and how, at first, that separation caused immense pain and resentment in my heart,” says Kera. “In time, I began to recognize there were reasons for this loss and changes I had to make; and now I’ve learned to view these experiences through a more compassionate lens.”