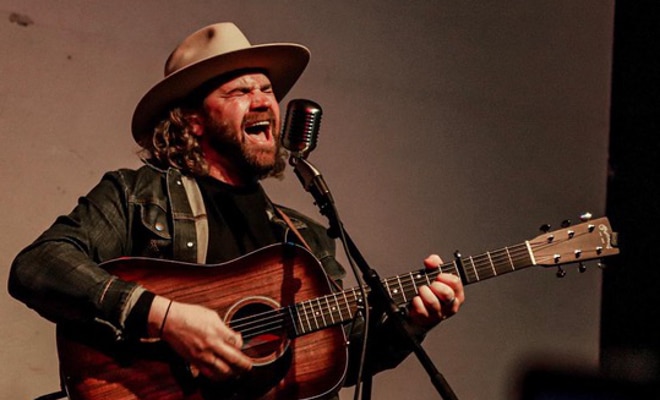 This Tuesday, emerging roots-rock act Kevin Daniel & The Bottom Line will hit the road on their Southern Word Tour. The tour will kick-off in Washington, DC at DIVE. He and his band will then follow a familiar route through the Southeast, landing at Folk Alliance International on the 26th in New Orleans.

Joining them on the road is Seth Power, 26-year-old singer-songwriter and American Idol contestant from the heart of Mississippi.

The dates will see Daniel showcase material from his critically-acclaimed album, Things I Don’t See. Co-produced by Ben Rice (Norah Jones, The Candles, Aoife O’Donovan) and Kenny Siegel (Langhorne Slim, Joseph Arthur, Chris Whitley), Things I Don’t See showcases Daniel’s fluid ability as a songwriter to seamlessly incorporate bits of rock, soul, country, blues, roots, and Appalachia into his thoughtful examination of pain and awakenings, visceral and spiritual. The LP’s title track mines these depths with aplomb while “Time To Rise (ft. Shannon Söderlund)” and “All I Need” reveal a path forward.

The title track of the album, “Things I Don’t See” delves into haunting thoughts Daniel typically avoids. The song was written about the last moments my mom and step-dad were alive. In 2013, his parents, amateur pilots were flying back to their home in eastern North Carolina when their plane crashed over Winston-Salem. It is assumed they died on impact.

“There’s not a day that goes by in which I don’t think about the last few moments of my parent’s lives,” Daniel shared. “That time between when they knew 100% they were going to crash and the first moment of impact.” This song explores the unknown and unanswered. “I wonder if they knew peace or if it was pure terror,” Daniel scrutinized. “I wonder if they thought of me, our family, said anything out loud, or just looked at each other and cried.”

Although “Things I Don’t See” is Daniel’s favorite track on his new album, it is not likely you will hear it while he is on stage. Due to its emotional resonance, he finds this song distracting to his performance. “It really slows everything down and changes my energy in a way that isn’t always best for a show,” Daniel explained.

Two more tracks from the album that will be played on the road are “Used to Be” and “City that Saves.”

“Used to Be” is a coming of age story, one that reflects on younger days and the concept of growing up. “I think it’s common in our culture to chase the younger versions of ourselves and memorialize stories of our past,” Daniel shared. Daniel explained that when he lost his mother, not only did he lose her stories, but also her accountability. “I’m not totally proud of how I handled myself after my mom and step-dad passed,” admitted Daniel, “But I know she would have been proud of all the energy I put into music.”

“City that Saves” follows a small-town boy’s journey into the big city. “I always say that New York is a living creature trying to shake the fleas off,” Daniel joked, “You have to hang on for dear life if you’re going to stick around, and even then you might find yourself struggling.” Contrasting with this, Daniel also describes his new home as a place of “extreme kindness and beauty.” The song is one of complicated gratitude toward the metropolis that pulled him out of the deepest sorrow and brought him back to life.

Be sure to catch Kevin Daniel’s Southern Word tour for the following dates or check out his website to find out when he will perform in your city.

0
PHISH, today, is announcing its summer 2020 tour. The 27-date trek begins on the west coast with two shows at the Matthew...
Read more
News

0
It is the third single off the band’s forthcoming debut album.
Read more
Album Reviews