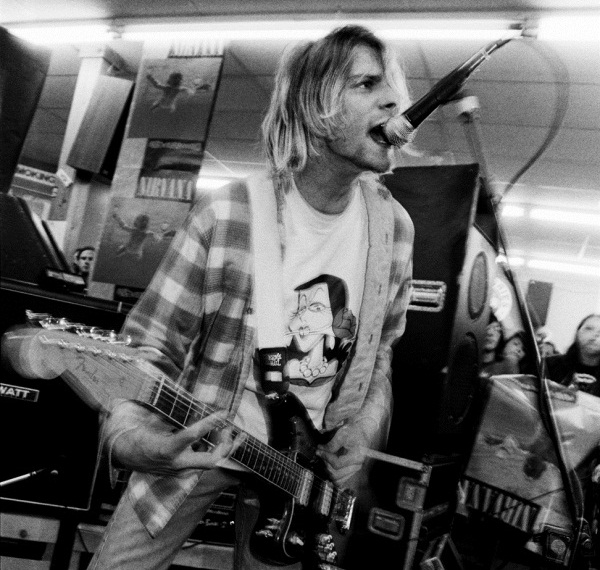 When Nirvana exploded onto the music scene with Nevermind in 1991, the band became an overnight phenomenon in a new era of rock. And the band’s frontman, the late singer-songwriter-guitarist Kurt Cobain, became the somewhat reluctant spokesman for a population of angst-ridden young men whose lives, almost like his own to that point, seemed to be going nowhere.

Songs like “Smells Like Teen Spirit” “Come As You Are” and “Lithium” changed the airwaves, helping usher in the grunge movement that also spawned bands like Pearl Jam and Alice in Chains. Cobain had an affinity for Fender Jaguars and Mustangs, with those guitars coming to define the Nirvana sound both live and on record. To combine his favorite features of those guitars, the left-handed Cobain approached Fender about building him a new guitar that would be known as the Jag-Stang.

Fender delivered a prototype sonic blue Jag-Stang to Cobain in 1993, and he took it out on tour in support of Nirvana’s In Utero album. Guitar builder Earnie Bailey, who was Cobain’s guitar tech, remembers the Jag-Stang, which Cobain really didn’t use much.

“Kurt tended to record with guitars that he liked to play live, guitars he was real comfortable with,” Bailey says, “and at that point the Jag-Stang wasn’t one of them. I believe the guitar showed up not long before the In Utero tour began, and there wasn’t a lot of recording going on then anyway.”

Even though Fender had built the Jag-Stang to Cobain’s specs, Bailey modified it as Cobain found things he wanted adjusted. “Basically everything that came in, including the Jag-Stang, I modified,” Bailey says. “Kurt’s older Jaguar was already pretty heavily modded and he liked it pretty much the way it was. But there were always changes of one kind or another to almost everything.”

Bailey doesn’t know that Cobain used the Jag-Stang for writing, but says he was never actually in Cobain’s presence when the artist was writing a song anyway. “At least lyrically, no. I was in the room or the dressing room when he would be playing some changes he was working on with one of the other guitars, but I was never around when he actually was writing something in full.”

After Cobain’s April 1994 death, Bailey went on to work as guitar tech with former Nirvana drummer Dave Grohl’s band the Foo Fighters before starting his own guitar building business, Wire Instruments, in the Seattle area. And Cobain didn’t live long enough to see the second Jag-Stang, a fiesta red one that Fender built for him. His widow, Courtney Love, gave the original sonic blue Jag-Stang to R.E.M. guitarist Peter Buck, who has it to this day.

Fender Japan mass-produced and sold the Jag-Stang for a few years following Cobain’s death, and then again from 2001 to 2006 before canceling production altogether. Bailey is unsure about any true “endorsement” Cobain made of the instrument, but it’s all water under the bridge now.

“I don’t know if Kurt was much of one to actually endorse anything,” he says. “Kurt wasn’t really into the business part of it at all. That was one of the things I loved about him.”