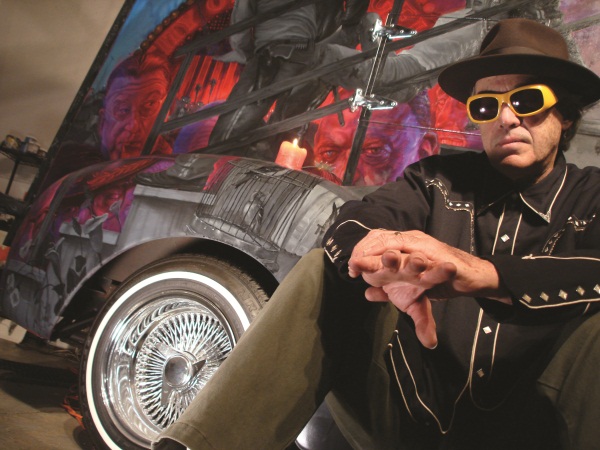 Ry Cooder is known for being an obsessive instrument tinkerer, but for the 1984 soundtrack to Wim Wenders’ film Paris, Texas, the California native apparently turned to a classic Martin: the 000-18.

Cooder grew up around Los Angeles as a folk and blues player and prior to being tapped to play on Captain Beefheart and the Magic Band’s debut album, Safe As Milk, in April 1967, he didn’t even own an electric guitar. “I had a car and a Martin guitar, and that was about it,” he once said.

Over the years, Cooder has amassed a vast instrument collection, including Latin instruments like the bajo sexto as well as Indian instruments. He’s also famous for his two “Coodercasters,” ‘50s and ‘60s Fender Strats that he’s modified with unusual pick-ups taken from guitars like the Japanese-made Teisco Del Rey and Oahu lap steel.

In more recent years, Martin’s Dick Boak says Cooder commissioned a Merle Travis-style guitar from the company with the words “Kash Buk” inlaid on the fretboard, immortalizing the country music-singing protagonist from Cooder’s 2008 album, I, Flathead, the final installment in his Los Angeles trilogy.

But for Wenders’ film, which traces the wanderings of an amnesiac named Travis through the bleak Texas landscape, Cooder channeled an eerie, moaning bit of American history called “Cold Was The Night, Dark Was The Ground,” which was originally put to wax in Dallas, Texas, in December 1927 by the sanctified blues singer Blind Willie Johnson.

The song has no words except Johnson’s lonesome, droning hum, and features his utterly haunting slide guitar work. Much speculation has been made on what kind of guitar Johnson played and in what manner he played slide (lap-style or upright). In the only known photo of the blind guitarist, he’s holding a small guitar upright in his lap.

“Most people think that Blind Willie Johnson is holding a 1920’s ‘First Hawaiian Conservatory’ guitar made by the Oscar Schmidt Guitar Company in Jersey City,” says Zeke Schein of Matt Umanov Guitars, who gives credit to Neil Harpe for being one of the first to make the supposition.

Most blues researchers think Johnson played with the guitar flat in his lap, using a knife as a slide. But Cooder, one of the most distinguished slide guitarists in the world, recorded his version upright, in the same open-D tuning Johnson used.

In July 1996, Cooder’s guitar tech, Rick Turner, told Acoustic Guitar magazine that Cooder still owned the 1950s 000-18, which Turner believed he used on the recordings for Paris, Texas. The 000-18 has a small body, short scale, mahogany back and sides, and a spruce top. Cooder may have gravitated to the guitar for its bright tone, able to produce the rich acoustic harmonics of Johnson’s original and the high-end transparency that is ideal for slide.

Throughout the film, Cooder’s song (called simply “Paris, Texas”) is a recurring theme, following actor Harry Dean Stanton on his search for meaning. Like most pre-war bluesmen, not much is known of Blind Willie Johnson’s life. He was poor and sang in the streets, and was a reverend in a small church in Beaumont, Texas.

Like the character in the film and Johnson in life, Cooder’s guitar stands mostly alone on the recordings, with only a few sparse ambient sounds for accompaniment. For the last song on the soundtrack, Cooder does a complete rendition of “Dark Was The Night.”

“Blind Willie Johnson is in the ether somewhere,” Cooder told Jas Obrecht in 1990. “He’s up there in the zone somewhere.”