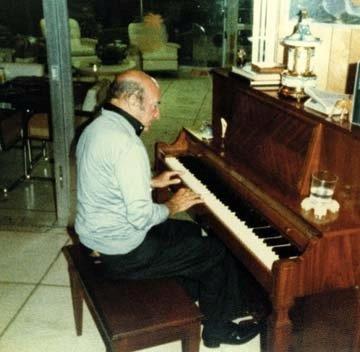 “The music is indestructible,” wrote Michael Sigman, son of the legendary songwriter Carl Sigman,  composer of such standards as “It’s All In the Game,” “Ebb Tide,” and “Where Do I Begin (Love Story).”

Only days past the horrific Thomas fire and ensuing mudslides that hit Ventura County, we heard from Michael. Although he and his wife Wendy are safe, sadly their entire house and all belongings perished in the fire on December 5. These included all vast archives of mementos of his father’s extraordinary life. Despite the loss, as Michael relates in the following, the fire brought home the “good news,” as he put it, which is that the songs live on. To write a standard, even one, is the most supreme achievement for a songwriter. Carl Sigman wrote many. Michael has an intimate and historic closeness to these songs, and in the following he generously shares his memories of the life and times of several beloved American standards which remain timeless and indestructible.

Michael Sigman: Two weeks [after the fire],  the New Yorker published an item about a cabaret performance of Carl’s songs. Our family’s favorite magazine called Carl “obscure” while praising him for writing “such imperishable gems as ‘It’s All in the Game’ and ‘Ebb Tide.’” He would have loved the confluence of personal anonymity and artistic appreciation.

Most of what’s gone is irreplaceable. There were hundreds of pieces of original, annotated sheet music — some for songs that eerily conjured the disaster, such as “What Now My Love” (“How can I live through another day/Watching my dreams turn into ashes/And all my hopes into bits of clay”), “I Have Felt the Fire,” “The World We Knew” and “Enjoy Yourself (It’s Later Than You Think).”

There were piles of yellowed press clippings from the Brill Building era, including Earl Wilson gossip columns from the ’40s about my parents’ courtship, marriage, and the birth of their first son, aka, me. (My mom, Terry Berkowitz Sigman, was Louis Prima’s Gal Friday and my parents met in Louis ‘offices in the Brill.) There were scores of vintage photos of Carl with his mentor Johnny Mercer, and friends and colleagues including Perry Como, Jerry Wexler, Percy Faith, Bob Hilliard, and Bob Russell.

What I’ll miss most perhaps is a messy drawerful of Carl’s titles for songs that never got written — mad scribblings on whatever he could get his hands on, from matchbooks to napkins to gas receipts.

But here’s the good news: the music is indestructible. And the better news: as awful as it was, the fire and its aftermath have provided an extraordinary lens through which Carl’s work and its resonance can be more deeply appreciated.  Though his songs are widely known and loved, the New Yorker’s reference to him as “obscure” is accurate. Carl shunned publicity as though it were a contagion.

The stories of Carl’s two best and most important songs illustrate how a man who viewed his songwriting as a craft, not an art, could occasionally be transported so that a lyric would, in his words, “write itself.” They also show how a man who could capture human connection in the most intimate way in his work preferred to do that work without directly connecting with his collaborators.

The number one record in the country in early 1953 was “Ebb Tide,” a tune written by composer/harpist Robert Maxwell and recorded by Frank Chacksfield and his Orchestra. The music industry’s most powerful publisher, Jack Robbins, who controlled the copyright, sensed a smash in the making if only he could get the right lyric, and fast.

Jack sent the lead sheet over to Carl, who was mesmerized by the tune but couldn’t imagine how to give it words. After all, what rhymes with Ebb Tide? Web Ride?

After several fruitless days, as Robbins transitioned from friend to tormentor, Carl decided to take a break and catch a movie. That’s where the muse struck, in the form of a trailer for the World War II romance, From Here To Eternity.

“I took one look at the image of Burt Lancaster and Deborah Kerr locked in an embrace on the beach as the tide washes over them,” Carl said, “and it seemed so natural and simple. I couldn’t understand why I hadn’t thought of it before. I wrote out the lyric with scarcely a moment of reflection.”

Vic Damone hit the Top 10 with “Ebb Tide” out of the box. I was just four, but I remember the joy that filled our house when it came on the radio. Mom would yell, “Plug!” I’d yell back, “Victor Moan is a hit!”

The Sigman family’s two favorite versions of “Ebb Tide” demonstrate that the song is nearly as versatile as “It’s All In The Game.”

Frank Sinatra’s deeply spiritual reading for his 1958 album, Frank Sinatra Sings for Only the Lonely, featuring a stunning Nelson Riddle string arrangement that evokes the movements of the tides, inspired Bob Dylan to write in his autobiography, Chronicles: “I used to play the phenomenal ‘Ebb Tide’ by Frank Sinatra a lot and it had never failed to fill me with awe. The lyrics were so mystifying and stupendous. When Frank sang that song, I could hear everything in his voice — death, God and the universe, everything.”

Eight years and a rock & roll revolution later — the day after The Beatles’ Rubber Soul crashed  onto American shores — Phil Spector released “Ebb Tide” by the blue-eyed soul duo the Righteous Brothers as a single on his Philles label.

The record starts with a single bell chime and, via Bobby Hatfield’s ethereal tenor and Phil’s wall of sound, builds to a monumental climax, followed by a man “at peace in the web” of his lover’s arms.

The record, which went Top 5 on the pop charts, was supposed to end with that post-coital peacefulness. But Hatfield tacked on a rollicking postscript, belting out the words “Ebb Tide” for a rousing post-climax climax. It’s the only time the title was sung on any recording of “Ebb Tide.”

Shortly before his death in 2003, I asked Hatfield about the shout. He explained that it was totally spontaneous; in fact, he said, he snuck it in during a break while Spector was out of the studio.

Another music publishing exec was the catalyst for Carl’s biggest hit, a song he wrote with a very powerful man to whom he would never speak.

For years Carl, a classically trained pianist, had wanted to put words to “The Dawes Melody,” or “Melody In A Major,” a classical violin and orchestra piece composed in 1911 by Charles Dawes, a Nobel Prize winner, a general and vice president of the United States under Calvin Coolidge.

Dawes composed the piece in a single piano sitting. “It’s just a tune that I got in my head, so I set it down,” he told an interviewer.

In 1950, a few months after I was born, Carl, assuming that the melody was in the public domain, started putting words to the music.

But the copyright was owned by Warner Bros. Music, and by sheer coincidence, Mac Goldman, who ran the pubbery, called Carl and asked him to add a lyric to “The Dawes Melody.”

Carl realized in a flash that a phrase from another song he was working on was perfect for this tune. Once he plugged that title into its proper place, the lyrics to “It’s All In The Game,” yes, wrote themselves.

“It’s All In The Game” first hit the charts as gentle waltz by Tommy Edwards on MGM Records. It went Top 20 in late 1951.

Seven years later, Edwards re-cut the tune for MGM in 4/4 time with doo-wop vocals and tasty electric guitar licks. The new version soared to No. 1 on the charts, where it remained for six weeks.

The universal appeal of “It’s All In The Game” is illustrated by the diversity of  its cover versions. Some of the best include a supper-club soul rendition that went Top 10 R&B for The Four Tops in 1970; two country chart entries – by Tom T. Hall on Mercury and Merle Haggard – in the 1970s and ’80s respectively; and a genre-transcending interpretation by Van Morrison on his 1979 album “Into the Music.” Other immortal “Gamers” include Louis Armstrong, Dinah Shore, Sammy Kaye, Bobby Vee, Jackie DeShannon, Cass Elliot, Elton John, Nick Lowe, Bobby Blue Bland, Art Garfunkel, Keith Jarrett, Ricky Nelson, Cliff Richard, Isaac Hayes, UB40, Freddy Fender, Bing Crosby, Barry White, Donny and Marie Osmond, Gerry and the Pacemakers, Sammy Davis Jr, Phoebe Snow, and the Gaylads. Bob Dylan sang it often in concerts during the ’80s. Van Morrison still does.

On the original sheet music, my copy of which now rests among the ashes on the still uncleared site of our former home, the credits read, “Words by Carl Sigman” and “Music by Gen. Charles G. Dawes.” Unfortunately, the general, aka the vice president, never got to hear the lyric. On the day Carl handed in the finished assignment, Dawes died of a heart attack. That prompted the publisher, Mac Goldman, to quip, “Your lyric must have killed him.”