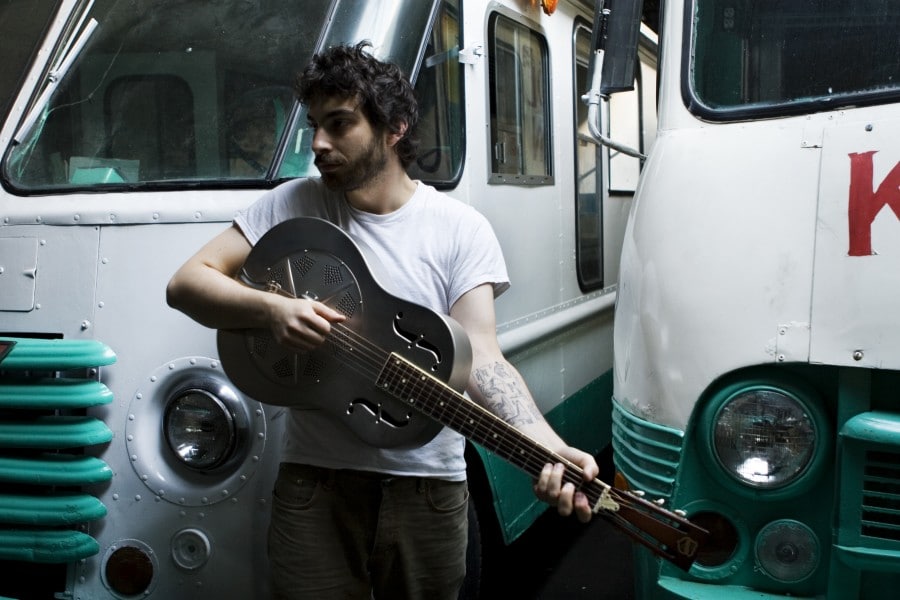 Like Crazy Horse, Wilco and Sun Volt before them, they use country and roots music as a sort of starting-off point. But they don’t sound like they’re wearing brand new overalls and standing in the cornfield of Hee Haw. They are Leland Sundries.  And in the interest of truth, justice and the American way, it must be said: they are simply one of the more exciting roots-based bands to be unleashed in quite a while. With their new disc, music for outcasts, these New York-based boys have just finished spring training and are ready for their various starting positions. Put them in coach.

The auteur of this kicking band is Nick Loss-Eaton. A handsome, bearded fellow, with a deep, soulful voice and more than a little of Richard Manuel’s beautifully-pained strains in his voice. This winning writer of Leland Sundries’ songs took a somewhat circuitous route to writing his melodic, uber-catchy Americana tunes.

“I started out taking piano lessons, beginning in 1st grade,” says Loss-Eaton. “My mom was a big Bob Dylan fan, but for some reason, I couldn’t stand him when I was a kid.” He chuckles. “That changed.”

The songwriting bug bit Loss-Eaton bad when he was 18.

“I got to college and something happened. Actually, I know exactly what happened. I started listening to The Freewheelin’ Bob Dylan,” says the musician, chuckling at his Road-To-Damascus conversion. “Suddenly that album made total sense to me. Especially Bob’s harmonica playing. I started to write songs on piano, but that seemed a little silly. I figured I better learn how to play guitar.”

He did. As well as learn how to blow great, bluesy harp. He listened to The Stones. Bob Dylan and The Stones. And there was another volcanic incident, one more big epiphany that sealed the deal for the leader of Leland Sundries.

“In 2007, when I had moved to Manhattan, my grandmother died. It was a tough time for me anyway, but this made it tougher, because we were so close. But what really hit me was her painting. My grandmother was an amazing artist who left behind an enormous body of work. And I thought, if she hadn’t followed the muse and followed through, none of this stuff would exist. It was a real now-or-never moment for me. That I better get on it. So I got really serious about the songwriting then. And started booking gigs.”

Loss-Eaton also made a cross country trip around this time, that was nearly as extensive as anything by Alan Lomax. He met several important blues men, immersed himself in the meat and marrow of America, and basically let it all get into his blood and his songwriting. If tunes like “Maps of the West” (the album’s first single and video) has a real feel for the bars, hills and plains of the U.S., that’s no accident. This fellow knows his geography now. Both out in the the rolling hills and inside his own heart and soul.

“I think that was the turning point in my becoming a storyteller,” says Loss-Eaton, whose tunes mix quirky, electric Country, with the tale telling of John Prine and Townes Van Zandt. “After meeting a lot of folks, the songs became more about other people than just me. I met so many interesting characters and I suddenly wanted my songwriting to have an openhearted, American approach. And to talk about things I’d seen and people I met.”

Then there’s the rest of the band. A great, rockin’ bunch of guys, whose tight playing and touching camaraderie makes them seem like they grew up together in some old mining town, listening to both Hank Williams and The Ramones. Watching Allan Nova on keys, Matt Sklar on bass, Ivan DeYoung-Dominguez on drums and Curtis Brewer on guitar, is as bracing as chugging a beer spiked with pep pills. One minute Leland Sundries has you weeping in your beer over the cowboy lament, “Keys in The Boot,” the next they’re rocking as righteously as The New York Dolls-inspired “Bad Hair Day.” Throw in the radiant Power Pop of “Apocalypse Love Song,” and you’ll see there isn’t a genre they haven’t mastered. These guys have only one rule about the music they play: it has to sound authentic and cool. Which, a good damn portion of the time, it does.

“We’re really starting to feel momentum now,” Loss-Eaton says excitedly. “We’ve just gotten rave reviews in both UNCUT and Mojo. We’ve been called Americana and been compared favorably to Jonathan Richman, too. That’s cool. We don’t want to be pigeonholed, so it looks like that’s not gonna be a problem. When people come out to see us play this spring, they just need to know one thing. We really kill it live and we mean what we do. So, just come and hear us. Leave your expectations behind and bring your enthusiasm. And I promise, you won’t be disappointed.”

Art Alexakis Opens Up About His Solo Debut, Living His American Dream, and Being a ‘New’ Man

0
Art Alexakis never imagined that he would actually get to live the dream.  Nearly 30 years after forming Everclear,...
Read more