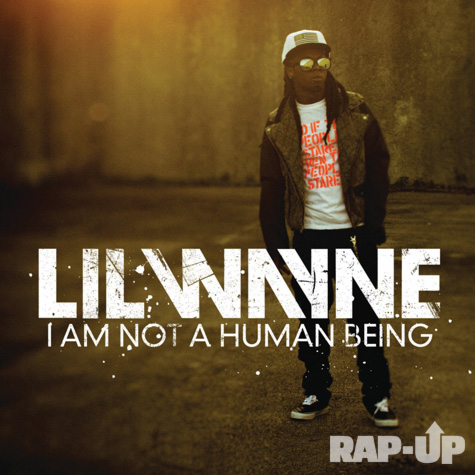 Lil Wayne: I Am Not A Human Being Lil Wayne
I Am Not A Human Being
Cash Money Records
[Rating: 2.5 Stars]

Filler. Yep, I said it – in a career filled with endless streams of music that only exists to remind you that Lil Wayne makes music, this seems like the most blatant attempt to squeeze some filthy lucre from Wayne’s fans. Seriously, The Carter IV is hardly a month away, you couldn’t have just put Human Being’s two decent tracks – there isn’t really a song that makes it to the “great” level – on that record and let us wait a month? Is this album just an attempt to lower expectations before The Carter IV? Does the label really think that we’re going to forget Wayne even if he’s in jail for eight months? I get it that modern fans are finicky and quick to forget, but it’s not like jail has interfered with the omnipresence of his guest appearances, or slowed down Young Money’s radio dominance or even kept Wayne out of the gossip columns. Hell, does anybody else think it’s a little fishy that Wayne got sent to solitary for smuggling an iPod barely a week before Human Being hits stores? And is it a coincidence that the next album drops right as he’s supposed to get out of jail? No, it’s not, but none of that makes the album any more interesting. Wayne can be a great rapper and lyricist, but more often than not people are willing to let the sheer quantity of Wayne’s work overshadow the rather spotty quality of it. When Wayne is on, he’s one of the best in the game, but on Human Being he’s just killing time with sub-par versions of his far more popular songs – this is a completely superfluous release that lacks the relevance and immediacy of his mixtape works and the quality-control of his albums. Ah well, at least there’s no Auto-Tune.