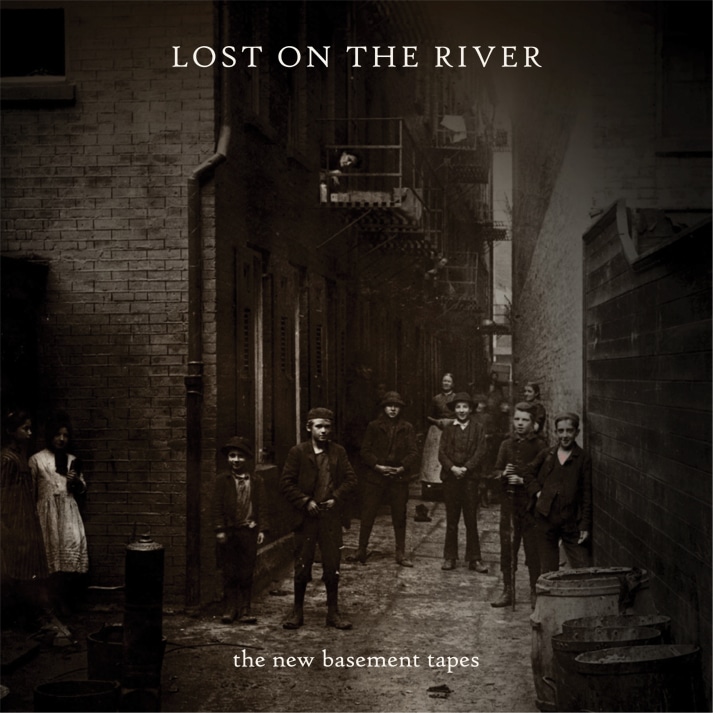 Lost On The River: The New Basement Tapes – Various Artists On Nov. 4, Bob Dylan released The Basement Tapes Complete: The Bootleg Series Volume 11, a six-disc, 138-track box set that marks the first time every recording from his 1967 Basement Tapes sessions will be compiled in one volume. Following a near fatal motorcycle accident, the tome was produced over a period of several months where Dylan and the Band (then known as the Hawks) wrote and recorded effusively in the relative isolation of several homes in the Woodstock, New York vicinity. Yet, despite the claim that it’s the end-all-be-all chronicle of that era, the collection wasn’t fully “complete.”

That fact came to light earlier this year when Dylan’s publisher contacted producer T Bone Burnett about a recently discovered box of handwritten lyrics from those sessions that apparently remained unused. So with Dylan’s blessing and the gift of creative freedom, Burnett enlisted Elvis Costello, Jim James of My Morning Jacket, Rhiannon Giddens of the Carolina Chocolate Drops, Taylor Goldsmith of Dawes and Marcus Mumford of Mumford and Sons to act as a sort of Americana/folk super-group that would bring the lyrics to life with original music.

Two weeks in the studio with session drummer Jay Bellerose produced Lost On The River: The New Basement Tapes, 20 of 48 tracks derived from the lyrical treasure trove. Because of the way the record was made – with each musician taking the lead on certain songs, filling in gaps with the others as backing players – the album’s music doesn’t so much reflect the style of Dylan and the Band as much as it does the poetry and the original demos’ democratic manifestation. It’s a record that’s likely to be abhorred by Dylan’s most hardcore fans, yet one that will nevertheless become infinitely important to Dylan historians.

Goldsmith’s selections – “Liberty Street,” “Florida Key,” “Card Shark” and “Diamond Ring” – similarly echo anything he might make with Dawes, and Giddens handily transforms “Spanish Mary” and “Duncan and Jimmy” into narrative-heavy backcountry marches. Still, she adds a spine-tingling air to the intention of the former when she whisper-sings “Beggar man, beggar man, tell me no lie/ Is it a mystery to live?/ Or is it a mystery to die?” and amps up the latter with a tack-sharp, rollicking banjo line in way that went beyond the somewhat lazed, reefer-laden sessions of the Hawks.

James meanwhile asserts his inimitable falsetto on opening track “Down On The Bottom” and the swanky love ballad “Hidee Hidee Ho,” then injects his love of Motown – so obvious across his MMJ catalogue – into the sweetly sung waltz of “Hidee Hidee Ho.” It’s during this cut that he drops his guard and lets a bit of the Dylan inside truly shine through when he half-laughs while delivering a line just as Dylan does amidst the marijuana-fueled mirth of “Rainy Day Women #12 & 35.”

Yet among all the tunes, those that most reverently imitate the original songwriter are Costello’s. His seemingly intentional speak-singing on the bluesy “Married To My Hack” takes after Dylan’s effusive whimsy. Then he strains his nasally tone to the limit for “Six Months In Kansas City (Liberty Street),” and he otherwise honors the off-the-cuff creative process behind those original recordings by keeping his choices at minimally produced, demo lengths (under four minutes for each).

It’s the concept behind that last bit that makes this album such a treasure and an essential addendum to the original Basement Tapes session: a 20-track collection may seem bloated at first, but the expansiveness of the recordings hold true to the Band’s willingness to test out varying versions. There are three “repeat” tracks here, with the switch of “Liberty Street” from downhome ballad by Goldsmith to the soulful “Hey Jude”-esque shouter when it’s handled by Costello and retitled “Six Months In Kansas City (Liberty Street).”

There’s something magical about imagining this gaggle of talents – just as Dylan and his collaborators might’ve done – sitting around after a song is finished and saying, “But what if we did thisinstead?” Keeping that idea in mind while listening to the title track, it seems more significant that it, too, crops up twice.

These forgotten lyrics, however, were caught in a different tide, but Dylan himself cast the line to fish them out. So maybe they’re mostly polished pop songs where the ’67 cuts embodied the raw, haphazard spirit of a songwriting era long gone – one that intuitively anticipated the impeccably executed Americana and folk heard on these new recordings – but the idea behind their origin will help them remain as timeless as the originals.