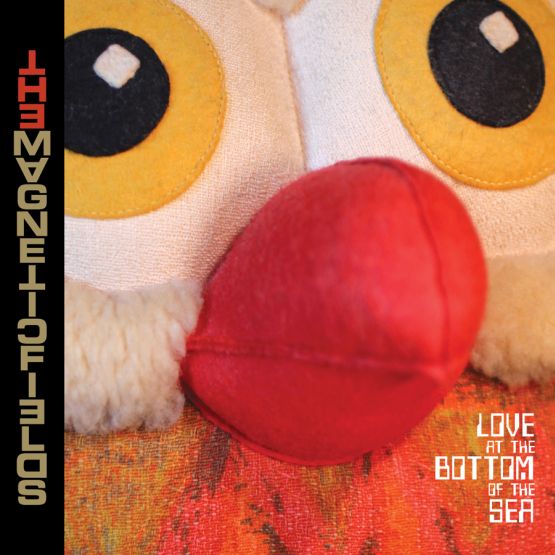 Magnetic Fields: Love at the Bottom of the Sea Magnetic Fields
Love at the Bottom of the Sea
(Merge)
[Rating: 3 stars]

In Strange Powers, the Magnetic Fields documentary directed by Kerthy Fix and Gail O’Hara, drummer Claudia Gonson reads from something called The Formulist Manifesto, in which head Field Stephin Merritt outlines some of his more obtuse thoughts on the nature of his chosen field. All art aspires to top 40 bubblegum pop. Cliché is dead; long live cliché. Something about self-expression through novelty. “Whatever,” Claudia says and tosses it aside.

Not so fast. “Self-expression through novelty” is the very heart of Merritt’s art and appeal, and he has spent twenty-three years meticulously composing silly little pop songs full of clever rhymes, startling hooks, and some of the drollest lyrics imaginable. But all that novelty masks a deep ache that Merritt enacts even in everyday encounters: Read some of his early interviews and see how he projects unease and unhappiness, much the same way rock stars project devil-may-care attitude. Even in a seemingly straightforward Magnetic Fields song, the layers can be complex, with humor disguising sadness hiding chagrin revealing abject loneliness.

That bouquet of complicated emotions has more to do with the Magnetic Fields’ long career than Merritt’s shaky bass voice or wry lyrics. Love at the Bottom of the Sea, the band’s tenth album overall and their first for Merge Records after more than a decade on Nonesuch, doesn’t sound terribly different from 2010’s lackluster Realism or 1999’s career-making 69 Love Songs. Despite his nods to novelty concepts—the distortion-heavy Distortion or the diligently first-person i—the Magnetic Fields’ music has stayed more or less steady and unchanging over the years, balancing American Songbook structures with no-frills production and the occasional nod to early 80s New Romantics.

Fieldheads may have no problem with that humble sonic trajectory, but it does tend to muddle the band’s catalog. Love at the Bottom of the Sea, in fact, sounds a bit scattered, as though Merritt isn’t sure quite what to do without an album-defining concept. How else to explain why the band would sequence the album’s worst song right after the best? “Your Girlfriend’s Face” strives for mean-funny, but comes across as mean-ugly, pointlessly and crassly violent. But “Andrew in Drag” is one for the greatest hits album, an endlessly listenable and deeply endearing ditty about gay desire: “I’d sign away the trust fund and even sell the Jag,” he deadpans, “if I could spend my misspent youth with Andrew in drag.”

Nothing else comes close to matching that particular high, although “I’ve Run Away to Join the Fairies” and “Quick!” get in a few good laughs. Too much of Love strains too obviously for cleverness. The music distracts with synth burbles and beeps, which sit uncomfortably among John Woo’s underutilized guitar and Gonson’s drums. And any song that rhymes derriere with pied-á-terre could reasonably be accused of trying too hard. But maybe trying to hard is also part of the band’s appeal. Merritt obviously appreciates the friction between high and low art, practicing a Sondheim meticulousness in service to silly little pop songs. But in flirting with frivolity en route to the sublime, the Magnetic Fields too often sound frivolous.