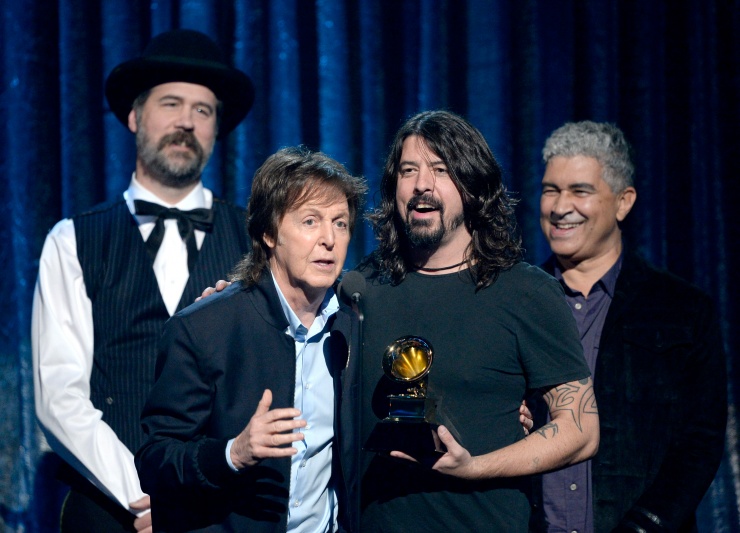 Any Grammys which has The Beatles performing is a good Grammys, and this year’s had performances by both surviving Beatles, Paul and Ringo. And though NARAS was cagey for weeks about whether Paul and Ringo would perform together since first announcing their appearance, they did play together: on Paul’s new song from New,” Queenie Eye,” with Sir Paul on a psychedelic upright piano, Ringo on drums, and the rest of the current McCartney band. Ringo also performed a cheerful rendition of his solo hit, “Photograph.”   McCartney was a winner on this night – as he has been on so many nights. In addition to The Beatles being awarded with a Lifetime Achievement Awards, Sir Paul won for Best Rock Song – which he wrote with the members of Nirvana, Dave Grohl, Krist Novoselic and Pat Smear, “Cut Me Some Slack,” from the Sound City album. Backstage Grohl said he invited Paul over to jam with the band on “Long Tall Sally,” and Paul suggested that they write a new one instead. So they jammed for three hours, “and this is the song we wrote,” said Grohl smiling, “the Best Rock Song of the Year!”

The Best Song award went to Lorde and Joel Little for “Royals.” New Zealand natives both, they were both at the Grammys for the first time. Asked backstage how he felt, Little admitted that it was “a wonderful dream. But much more dream than reality. This doesn’t happen to people from New Zealand, ever, you know!” He explained they made the song just as a means of introducing Lorde to the world, designed as a free download. Never did they intend this. In her acceptance speech, Lorde, who was 15 when she and Joel wrote the song, said, “Thank you for everyone letting the song explode. It’s been mental.” Best Album of the Year went to a Daft Punk for Random Access Memories, which features a veritable cavalcade of talent led by Nile Rodgers: Paul Williams, Julian Casablancas, DJ Falcon, Todd Edwards, Chilly Gonzales, Georgio Moroder, Panda Bear, Pharrell Williams, with featured artists Thomas Bangalter, Guy-Manuel De Homem-Christo, DJ Falcon and Todd Edwards. Paul Williams, the legendary songwriter, accepted the award. He said “Back when I was drinking and using, I used to see things that weren’t there. Now I am sober and I got a call from two robots asking me to work with them.”

“Back when I was drinking and using, I used to see things that weren’t there. Now I am sober and I got a call from two robots asking me to work with them.”

Nile Rodgers came backstage to represent the whole gang. Asked about going forward in music by going back, he said, “This was a labor of love. This concept seduced me. To go back to this gear they used then – and play precisely – play in the pocket,  that was the aim. None of the Chic music was ever done to a click track. So for them to do this kind of organic groove record was amazing.”

He admitted the impetus for the entire project came from his desire to work with his idol. “All I was thinking about was playing with Stevie Wonder. To me, that was enough. All the rest of it, wow, I am blown away. I don’t know what to say. I got a very serious form of cancer. And my therapy for it was to do more music than I have ever done. The music has been healing. The spiritual benefit was wonderful.

“We are stunned,” he continued. “We’re happy. None of us can believe this. If in fact they print the thing and say we had some feeling this would go this far, it is not true.” Steve Martin and Edie Brickell won the Grammy for Best American Roots song for the title song from their recent album, Love Has Come For You, awarded in the pre-telecast. Martin seemed genuinely surprised, and when he accepted, he said, “Thank you, we are truly stunned. If I can speak for Edie –  and I will –  this is such a distinguished group of nominees. We started doing this as a sport and we kept doing it.” Brickell then stepped forward and said, “Thanks to Steve for inspiring me.” Then Martin returned to add, “Working with Edie is incredible. She is one of the best lyricists I have ever worked with.”

Backstage I asked him what songwriting was like for him, compared to all the other kinds of writing he’s done, of jokes, books and movies. “It kind of works in a strange way,” he said. “I have never really collaborated with anyone on music, but I have this huge rash of banjo melodies that seems to float around in my head. I have written banjo music for a long, long time and I had even written lyrics myself for things. But I had never collaborated, and I didn’t know how it worked at all. I would usually email banjo melodies to Edie, and within 24 hours usually, she would send back a completed song. With lyrics, and sometimes a new vocal line. That is exactly what happened with `Love Has Come For You.’”

“I would usually email banjo melodies to Edie, and within 24 hours, she would send back a completed song.”

Edie stood behind him, literally in his shadow. Asked to comment, she said softly, “I was inspired by his banjo melodies. They inspired a lot of feelings in me, and all I had to do was say how I felt.”

Macklemore & Ryan Lewis, nominated for several Grammys, including Best Song for “Same Love,” won the Grammy for Best New Artist.  “Wow, we’re here on this stage right now,” said Macklemore, accepting. “First and foremost I want to thank our fans, the people who got us on this stage. Before there was any buzz, there were our fans.”   Then he added, “We made this album without a record label.”  But the show’s producers deemed his speech over, and the music swelled just as he was saying that they did this on their own. A funny moment, as he was about to celebrate the liberation of working independently, outside the umbrella of any corporation, and he was drowned out for a commercial.

The 56th Grammys started as they do each year, with a long pre-televised award presentation in which NARAS gives out all the awards not awarded during the official TV show. NARAS awards Grammys in some 82 categories. So rather than limit the amount of nominees and winners, they have come up with this solution, two shows, one broadcast on CBS, the other live here at Staples and webcast live at Grammy.com .

To the members of the press, of which I am one, it’s like one very long show. We monitor the proceedings in press rooms backstage, interrupted when winners and/or presenters come backstage to talk. Cyndi Lauper hosted the pre-televised portion. “It was another great year in music,” she said, “starting out with Beyonce blowing out the lights at the Superbowl. And ending with the members of Pussy Riot being released from prison. Which was not only a great triumph for freedom, but we also got to hear the press say Pussy Riot. What’s better than that?”

She then instructed nominees to listen closely, so that you only come up if you win. “I know a lot of us are anxious,” she said, “but be sure you won before you come up.”  She encouraged everyone to come up quickly, and keep their speeches short so as not to be played off by the band. “It’s ironic that I am telling you about being on time. It’s one of those concepts I have been struggling with my whole life.”

The legendary engineer Al Schmitt won for Best Surround Sound Album for Live Kisses, by Paul McCartney. He said that his pal Neil Young wants to do an album with a large orchestra with one mic. “The way they used to record back in the Twenties,” he said. “The musicians had to take their shoes off, so as not to be too noisy.”

Young stated earlier this week  that his main problem with modern recording is the inability of most studios to faithfully capture a moment. But he made an exception for Al Schmitt, who he said knew how to do it. Schmitt laughed when I mentioned it, and then humbly said, “I learned a lot different than a lot of the guys now. When we started, we didn’t have EQ on the board or compressors or anything. Everything we did was with placement of microphones; you moved the mics around to adjust the sound. I was blessed to learn like that. My uncle had a studio when I was seven, so I learned from the best.”

Another legendary engineer, Bob Ludwig, won for Best Engineered Album, Non-classical for Annie Up, by the Pistol Annies. Ludwig has the distinction of having won a Grammy in every decade of The Grammys’ 65 years.  Also asked about Neil Young’s recent denigration of digital music, he said, “Neil is one of those people who is into great sound.  And I understand that. We were all working for a digital playback that would be very high res, and we were getting the best playback we could get. But then Apple released iTunes and the plug was pulled on that. iTunes made the choice to use very low–res downloads. Which was a real step backwards in terms of sound. But now with Blu-Ray and other  platforms, we have good sound. If we could have high resolution digital, then we can get amazing sound. But on a regular CD, though, it is low-res, and that is unfortunate.”

Queen Latifah presided over a mass marriage ceremony in the midst of the performance of “Same Love” by Macklemore and Ryan Lewis. “I look forward to the day when presiding over a wedding ceremony like this is the norm,” she said. “When it’s no longer unusual for same sex couples to be married.” To perform the ceremony, she explained, she had to go through some red tape: “I had to be ordained as a commissioner to do it, I had to be sworn in. But only good for one day. If you come see me before midnight, I can get you in. I can hook you up. Call me Queen Commish.”

“I had to be ordained as a commissioner to do it, I had to be sworn in. But only good for one day. If you come see me before midnight, I can get you in. I can hook you up. Call me Queen Commish.”

Asked how she felt about this song breaking new ground for hip-hop, she said, “Honestly, this isn’t new ground for hip-hop. I think this is exactly what hip-hop is capable of. We are part of the reason Apartheid was changed. Anytime there is violence in our community, or any social injustice, hip-hop is there. I hope this is inspiration to all of the artists out there to be brave, and not shy away from what matters.

“But this song tonight was special. To have your wedding in front of a 100 million people is pretty momentous. I was here. Macklemore and Ryan Lewis make good music. Whether it’s heavy, like this one, or it’s about a thrift shop, it’s good. Hip-hop rules.”