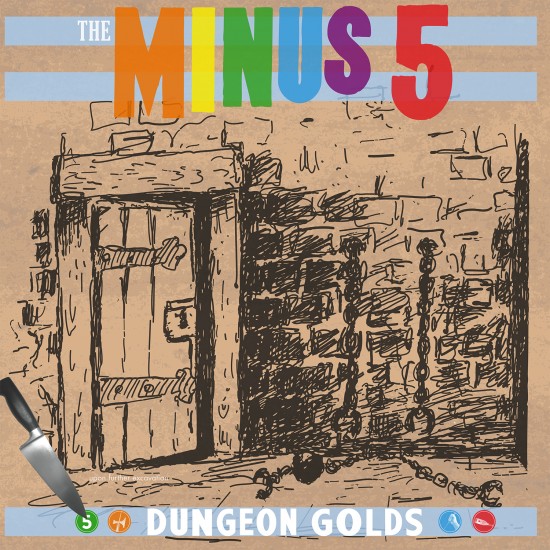 The Minus 5: Dungeon Golds Scott McCaughey isn’t usually a one man band. But his alias as The Minus 5 shows, over the course of nine previous albums starting in 1989, that regardless of who he invites for sessions, the music reflects his personality and vision. He is also a nightmare for diehard collectors who likely have problems keeping up with his ample output, both as the Minus 5 and solo, on various formats, including vinyl, EPs and product not available in the US.

This set helps structure some of that confusion. Its dozen selections are culled from three of the five LPs in his limited edition (only 750 copies!) Scott the Hoople in the Dungeon of Horror box, released for Record Store Day 2014. With so few floating around, the package became an instant collector’s item and for good reason. These songs are as trippy, wonderfully produced and well-written as anything in his catalog.

As usual, McCaughey is infatuated with 60s, predominantly UK, psychedelic sounds and especially those that lean towards the garage end of the spectrum. He balances rockers and ballads attentively with some songs such as “Chinese Saucer Magnolia” sounding like a cross between “Hurdy Gurdy Man” vintage Donovan and old Jefferson Airplane. Longtime associate Jeff Tweedy helps out on the Raspberries inspired “The History You Hate” and Peter Buck-another Minus 5 veteran who plays on almost every previous album—joins the late Ian McLagan for the Byrds/Petty inflected “In the Ground.” Buck also appears on 12-string for the singalong power country pop of “Sorry Town.” Buck and Tweedy back him on the retro Bowie/Ziggy styled Brit pop of “Zero Clowns.”

It would have been a waste to only let 750 lucky devotees hear the chiming pop of “Hold Down the Fort,” a catchy mid-tempo rocker that sounds like a pretty good Plimsouls outtake. And just so you don’t think he needs a band, McCaughey plays all the instruments Todd Rundgren style on the tongue-in-cheek “My Generation” (not the Who song, but a sharp parody of it).

Hardcore followers should know that these cherry-picked tracks are slightly altered/remixed/edited/enhanced from last year’s original vinyl versions. Still, this is the first many time have heard them and for indie geeks it’s manna from pop-rock heaven. But existing fans already understand that McCaughey is an under-the-radar pop wunderkind. So, as he says in the typically obtuse title of “Chinese Saucer Magnolia,” this is déjà vu all over again” in all the best ways.