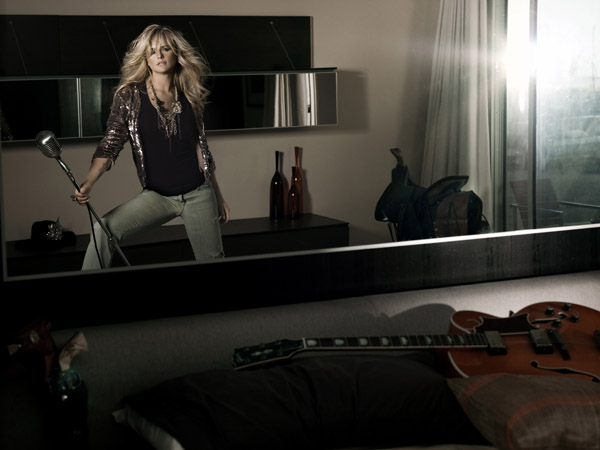 Just before noon on the opening day of her “Roadside Bars & Pink Guitars Tour,” Miranda Lambert takes a few minutes to talk about albums, why they matter and whether they’ll still be around.

“I’m interested in these things,” she says, as her dogs, Delilah and Delta, yip. She doesn’t have the answer as to the future of recorded music, but adds, “All I know is that I like full albums, whether it has six songs or 20 on it.”

She and her boyfriend, Blake Shelton, have demonstrated both ends of this spectrum. Shelton (see accompanying story) is wagering on his Hillbilly Bone Six Pak, the first of a planned series of six-song, less-expensive albums that are to be released frequently enough to keep pumping out a fresh hit and fresh material. Lambert is doing it the old-fashioned way. Her most recent album is the hot-mixed and heralded Revolution, a 15-song album.

This is ambitious in an era when her boyfriend has cut back on the number of tracks for reasons of economy and Wal-Mart retail appeal, and most Nashville albums have about 10 cuts.

Not only is Revolution a 15-song record, it is an old-fashioned, song-cycle album, meant to be played in sequence to achieve full effect.

Even though lead-off track “White Liar” became her first No. 1 hit, Lambert isn’t one to base her career on three-and-a-half-minute, radio-ready snippets and single digital downloads.

“I still think making a record—and not making a single with some other cuts on it—is the way to go,” she says.

“In my case, with 15 songs, there aren’t any you can take off it…If you want Revolution and you just download two songs, you aren’t going to understand what it is like. It’s like buying a painting and having a corner missing.”

Still, she’s a realist. And she knows many people simply seek singles to download.

“It’s really kind of sad,” she says, but notes she has benefited from the model. “It’s a Catch-22. My single ‘White Liar’ went No. 1 and went gold. I’m so glad that so many people wanted it, but I wanted them to hear every song on that album; every song came from my heart.”

It’s not that she’s against downloading. In fact, that’s the way she buys most of her music.

But she doesn’t cherry-pick singles. “I buy a whole record usually, but I get them from iTunes….My best guess is that it will eventually all come down to digital. We’re Americans; we want instant gratification. I’m into it myself. Get a whole record in five minutes.”

Still, she regrets many people are not allowing themselves the opportunity to travel through a whole album, whether it’s one by her or by another artist.

Shelton’s attempt to hit the market with $6 albums, including one hit and five other numbers, is something she lauds.

“I think Blake’s right to test the waters with this. We’ll see what happens. It’s doing great.”

But her longer-form album is also doing great, so she says maybe the worry about the death of the album is “just that everybody’s panicking about nothing.”

There’s no panic, only joy, in her voice on the day of this interview, seven hours before her tour officially launches at the Raleigh County Armory in Beckley, West Virginia.

She enjoys poking fun at herself and the aggressive female image she’s painted in her songs.

“I like pink guitars and puppies, so how scary can I be?” she says in one recent publicity release about the tour. “Seriously, it’s going to be a lot of fun. I’ve been on tour with some great male headliners, so I thought it’s only natural that I invite some talented guys on my first official headlining tour.”

She also has found some new allies out on the road. For the first time, radio is in the equation as she builds her career. “I had a rough time at radio. But I’m out there playing and meeting radio people and we’ve met in the middle somehow.”

Perhaps “Gunpowder and Lead” and “Kerosene”—earlier singles—were a little too combustible for radio at first. But that seems to have changed. “Now that they are embracing me so much, it [radio] helped me get my first No. 1.”

She doesn’t think that she’s changed. “I think I’m myself. It happens to be a little left of center. I’m lucky I found a niche and it works and people like it.”

However, she admits the newer album—while hardly the “softer side of Miranda”—shows a more complete picture of her. And that’s partly because her life has evolved thanks to personal and professional success.

“I think I started to get a little more positive on Revolution. And I think it is time. Definitely I’m happier and a little more settled and it’s showing in my record.”

Having people accept the songs she pens has been a primary ambition, even when she began performing as a teenager. “I always wanted to work in originals. Songwriting was my No. 1 goal.”

For reference, she draws from the writing of two men she considers originals. “I would say Merle Haggard and Guy Clark,” the latter of whom she’s written with, “Would be my top two songwriting influences. I think it’s just real music.

“I love songwriters who write about real things and keep it about life and things that happen in your life. I don’t like fluff and they are far away from fluff.”

Her own music—including a tough “Sin for Sin” she co-wrote with Shelton for Revolution—hardly could be called “fluff.”

Like her heroes, she likes to use reflections of real, sometimes gritty life in the songs she writes and in those she chooses to cover.

She wrote or co-wrote 11 of Revolution’s 15 songs. And she’s not slowing down, even as the pressures and pulls of stardom mount. “I’m doing a lot. After this record came out, it inspired me to keep writing and keep making music.”

Still, there is a softer side to this singer, particularly displayed in the types of music she chooses to download. Not all of it is Haggard, Clark or has the carousing and love-him/dump-him flavor one might expect.

“I listen to everything; I really do. I’m a big fan of all kinds of music.

“Lately, I listen to Michael Bublé a lot,” she says, revealing affection for that romantic singer. “I’m going to see him in Denver. Blake is taking me. It’s a belated Valentine’s gift.”