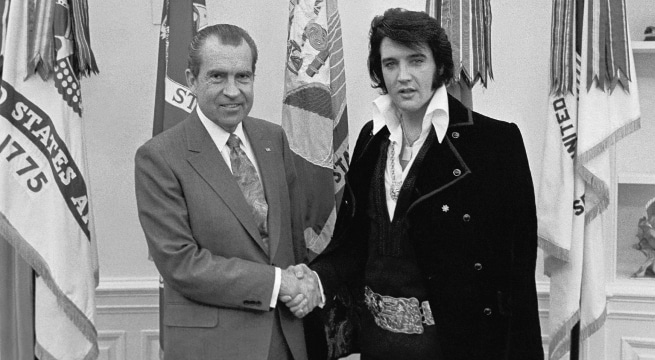 Musicians Who Served in the Military

No matter if it is Veterans Day — which it is — or any other, it is important to remember to appreciate our troops. On November 11 we take time to reflect on all the sacrifices our military members have made for us in trying to keep our country safe.

After your moment of silence you can play these artists and think of how badass these musicians are for serving. Keep in mind not all the military careers listed here were successful ones, but that shouldn’t keep us from celebrating them.

Here are four classic rock musicians who served in the military.

Before Jimi was shredding on the guitar, he was getting shredded at basic training. Authorities had caught him riding in stolen cars, and Jimi was given the choice of prison or military services. He enlisted in the army in the May of 1961 and was assigned to the 101st Airborne Division at Fort Campbell, Kentucky.

He hated it, and neglected his duties around the base to play guitar.

He successfully completed his paratrooper training, but his conduct and attitude did not impress his superiors and he was honourably discharged in the June of 1962. He would then go on to become one of the greatest guitarists of the 20th century. Click here to check out some new Jimi Hendrix merch.

Another car thief, Jerry Garcia was forced to join the United States Army after taking his mother’s ride in 1960.

As part of the Grateful Dead, Jerry never seemed like a military man and his time in the army was as expected. After routinely missing roll calls and going AWOL multiple times, he was generally discharged later that year in December.

Click here to read David Crosby’s poem written for Jerry on what would have been his 70th birthday.

Elvis Presley is widely known for having served in the military, and gained a lot of respect amongst the older generation of his time as a result.

He was drafted in March 1958, after his career was soaring. He was one of the most popular artists of the time, and was offered the opportunity to enlist in Special Services. He would have played music for the troops and lived in priority housing. He declined, instead opting to serve as a regular soldier, a move which earned him admiration among his comrades.

He served in Germany as part of the 3rd Armored Division and completed his service in 1960. He ended his service with the rank of Sergeant and impressed America with his commitment and respect for his country.

Ray Manzarak was a key member of The Doors and briefly a part of the highly selective Army Security Agency in 1961.

He originally wanted to be a part of the Army Signal Corps in order to make films. He played in music ensembles and smoked a lot of weed during his stint in the army, and was discharged as a Private First Class after refusing to sign a required security clearance. He would go on to receive an M.F.A. in cinematography in 1965 from UCLAs graduate film program.

A Royal(ty) Pain: Setting Streaming Pay Rates For Songwriters Is No Easy Task

0
It’s no secret that the digital era swatted away that status quo like it was a bothersome fly. And the rise of on-demand, subscription-based streaming services has put a deep dent in royalties paid to songwriters.
Read more
Articles