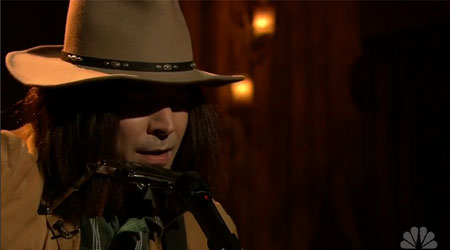 Neil Young a.k.a. Jimmy Fallon Sings “Pants On The Ground” Musical mimic and late night talk show host Jimmy Fallon does a mean Neil Young impersonation, a skill he showed off recently by performing the theme song to The Prince of Bel Air as the Canadian godfather of grunge. The video became an instant Internet sensation.

Now, Jimmy “Neil Young” Fallon has turned his attention to another lyrical masterpiece: “Pants On The Ground,” the bizarre song American Idol contestant Larry Platt energetically busted out on the show last week. (“With the gold in your mouth/hat turned sideways/pants hit the ground/call yourself a cool cat/lookin’ like a fool/walkin’ downtown with your pants on the ground.”)