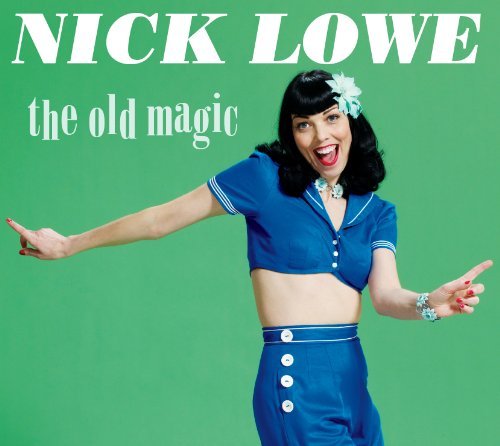 Once upon a time, Nick Lowe was a creative multi-tasker who bounced between twisting knobs for a number of artists (The Damned, The Pretenders) and pounding out jangly pub-rock alongside his drinking buddies in Brinsley Schwarz and Rockpile. During this time, Lowe was embraced by music aficionados while being overlooked as a commercial artist save for his sole Top 40 hit, 1979’s “Cruel to Be Kind.” Consciously wanting to avoid becoming an aging rocker desperate to hold onto the past, the witty Englishman has spent the past two decades recasting himself as a country music-flavored crooner content to sing about living and loving during the autumnal years of life.

Like the string of albums dating back to 1994’s The Impossible Bird, The Old Magic is steeped in the kind of organic production trimmed with the right amounts of echo and guitar twang to enhance his relaxed and intimate singing style. Heartbreak is a topic that provides plenty of grist as Lowe matter-of-factly sings of being a “Population of love/That’s me..” amid the lush strings and caress of a sole trumpet that defines the Burt Bacharach/Hal David-inspired “I Read a Lot.” While it would be easy for this musical style to slip over the line to mawkish MOR, Lowe and co-producers Neil Brockbank and Robert Treherne deftly avoid this misstep even when employing touches like the Herb Alpert-flavored horn nuances and tinkly piano flourishes that dot “Sensitive Man.”

Lowe may not rev up his amps, but he does throw in some more upbeat fare. “Checkout Time” is a tasty gem with a chugging tempo and Jordanaires-ish choral harmonies that could have easily been sung by his late ex-father-in-law Johnny Cash. Elsewhere, “You Don’t Know Me At All” has a rock-steady feel thanks to its loping beat, Skatalites-like horns and Geraint Watkins’ sublime organ fills. And as always, Lowe has a knack for picking covers, this time around recasting longtime buddy Elvis Costello’s “The Poisoned Rose” as a countrypolitan saloon song and infusing enough forlorn sentiment into “Shame on the Rain” for it to easily stand alongside the Tom T. Hall original.

Nick Lowe continues to age gracefully and for those still yearning for the Basher of yesteryear, there’s always the Labour of Lust reissue that came out earlier this year.