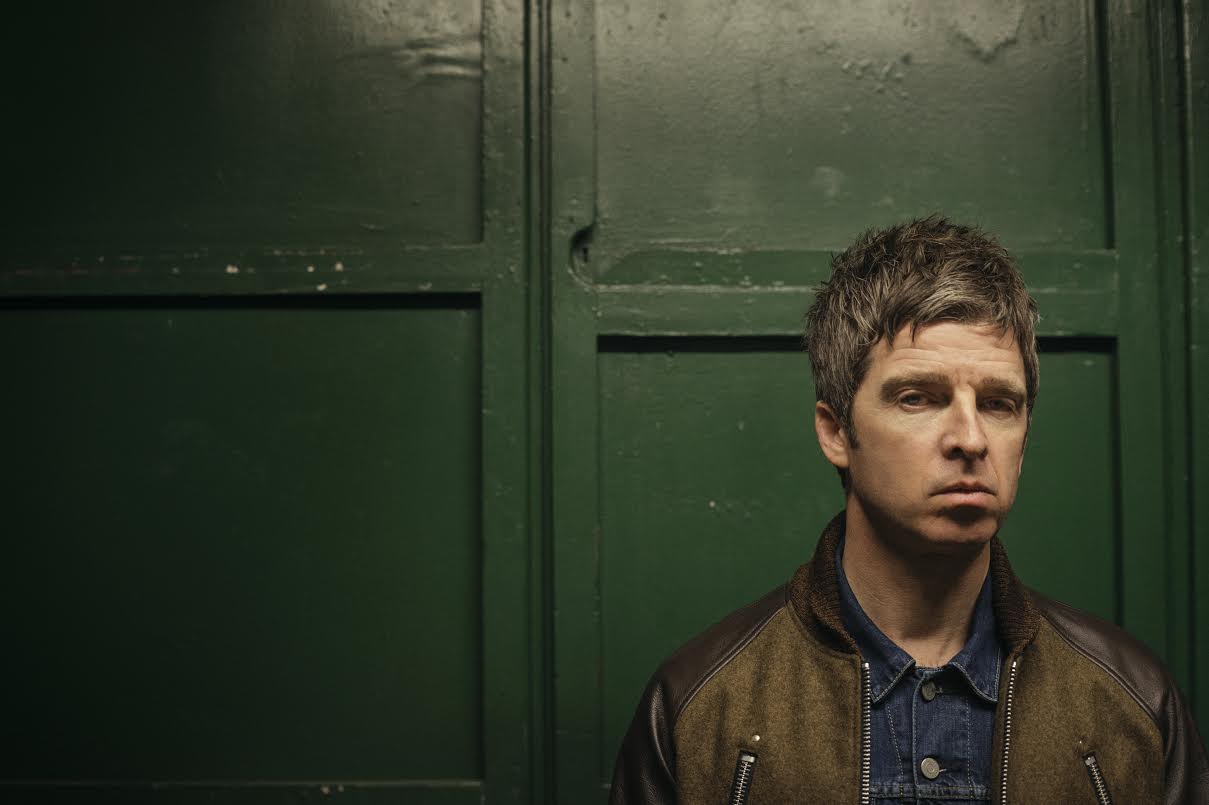 It’s a short fit of modesty that’s actually incorrect – the songs built themselves into people’s lives because they did touch greatness, ringing the perfect balance of dreamy imagination and guided emotion. For all the proclaiming of Oasis being “bigger than the Beatles” (a comment he recently claimed to have made high), Noel knows those tunes are nothing if they’re not sung along by an audience with their hands high in the hair, drunk on nostalgia and warm beer, swaying along.

As Noel Gallagher’s High Flying Birds, he plays primarily from his solo catalogue, with four or five Oasis tunes sprinkled in for that surefire crowd roar. Some, like “Morning Glory,” will never make it into a set – they just don’t fit his register, though he ended up having to sing lead on plenty of Oasis tracks toward the end of the band’s run, when Liam would often wander off mid-show, or just never appear at all.

It was supposed to be funny in 1995 when the band performed their single “Roll With It” on Top Of The Pops – frustrated with the need to lip-sync, Noel mimed the lead vocals while Liam “played” guitar, clumsily impersonating the solo. Watching it now, it feels awkward, like catching a boom in the shot: here’s the real wizard behind that fiery machine. Essentially, it’s Noel’s three-minute wink.

“If I were to make a choice of seeing Oasis do ‘Champagne Supernova’ or me, then I’d pick Oasis,” he admits matter-of-factly. “Ninety-five percent of people would say, ‘I’d rather see Oasis.’ But as Oasis aren’t together, I’d probably also say that 95 percent of those people would say, ‘well, this is the closest I am ever going to get.’”

Dave Grohl once claimed Oasis to be “the greatest rock band I’ve ever seen in my life.” Their gigs were characterized by Liam’s solo stance – howling up into the mic with his neck craned, his hands behind his back – with Noel thrashing through those unforgettable riffs. Liam was inspired by “more giving” front men like Bono, but Noel’s presentation is simpler, relying on the songs and a seldom smirk or witty snap at the audience over big, sprawling-on-the-floor moves. “British front men are dickheads. It’s beneath us,” he says.

In a Reddit AMA (“ask me anything”) the week before Shaky Knees, Noel made the proclamation that he was one of the “last rock stars,” and discussed the unsavory world of “modern rock,” where marketing trumps magic. He’s not entirely wrong: since Oasis, there have been massive new stars, but mostly of the pop variety. No emerging band since has reached the same heights, particularly in England, where retro, soul-inspired singers like Adele have become the offering du jour. Radiohead and Coldplay may have come the closest, but pop stars run the world, not rock stars, and no solo artist of the Ed Sheeran/Jake Bugg/Hozier variety is going to save anybody’s soul.

“Bands are what fucking make the world go round,” he says. “Solo artists are great, I am one now. But imagine if my two solo albums had been a brand new band. And I was 24, and all the guys in my band looked like they were 24. It would be the biggest thing since Oasis!

Part of what made Oasis so iconic is that they were thickly British – even now, in his clothing line Pretty Green, Liam peddles Union Jack iPhone cases and Noel’s most recognizable guitar, an Epiphone Sheraton, was emblazoned with the same image. Though the origins of rock and roll came from America, so many of its leading forces came from the United Kingdom: from prime Oasis inspiration The Beatles to the muse behind that controversial saxophone, Pink Floyd. What, exactly, is in the water – or the Channel, for that matter?

I bring up Jack White – a solo artist who carries the impact of a band – but Noel’s not buying it. “I’ve seen Jack White, and he’s an astonishing guitarist. And a great eccentric old-school-style wizard. But it has to come from bands. Bands have more power. And there has to be more than one star in the band – that’s why the Stones were so big, the Beatles, and the Who. The British bands, it’s always, John and Paul, Mick and Keith, Roger and Pete, me and Liam. American bands always have one guy.”

But there’s no one, on either side of the ocean, whom he thinks fits the bill at the moment, solo, band or otherwise. He likes Chris Robinson, but the Black Crowes, like Oasis, met a similar sibling rivalry-inspired fate. The Black Keys, too, though “they’re all vibe.”

“I’m going to talk purely in British terms right now,” he says, “but I don’t think any band will ever do what Oasis did, in the size and terms and scale of it. But there will come a point where a full generation of kids will be fucking sick to death of modern rock.”

He’s had enough of people making records “in their fucking bedroom” – there’s nothing sacred, or privileged about the process anymore. You don’t have to earn the right to record music.

“If anything, we were the last great band of the analog era,” he says. “Our music was the last great gathering before the internet.” He’s blamed online culture for favoring celebrity over substance before, and it’s hard to imagine how Oasis might have fared if they came up in an era where the brothers could have lobbed each other shots on Twitter back in the mid-’90s. They may have expired long before 2009 – though it’s quite possible that same environment could have bred the unfavorable conditions that eventually did the band in. Mold only grows if there’s moisture, and the click culture ate up that rivalry alive.

While a solo career for Noel made logical sense – he had the material – what Liam would do after Oasis was a bit more of a question mark. He hadn’t proved himself to be a writer, and when he formed Beady Eye with the remaining members of Oasis, the results were somewhat lackluster. Even slightly more surreal was when they would play Noel-penned songs.

“I did have a little laugh to myself,” he says. “Because those guys in the band were very quick to promote their own music, and very quick after we split up to say I was holding them back as songwriters. So when they went to do Oasis songs, do they do any of their own? No, they did all mine.”

So does Liam even have a right to play those tunes? “Well, he wrote about ten Oasis songs. He has a right to do those. Does he have the right? Everybody has the right. He can cover any of my songs,” he says, laughing.

And many have – The Killers, Lily Allen, Weezer, Ryan Adams, Coldplay. Noel’s melodies can adjust across any genre – that “campfire factor” that Martin pointed out holds strong. Adams, who has covered “Wonderall,” said in 2008, “I think ‘(What’s The Story) Morning Glory’ is an Oasisism. It doesn’t have to make sense, it’s just awesome. They find the thing, it works and it rolls off the tongue.”

An “Oasisism” is definitely a living entity – though Noel’s lyrics have become more defined over time, they were always filled with slightly perplexing statements: “the brains I had went to my head,” from “Don’t Look Back In Anger,” much of the band’s third album Be Here Now, written strung out on painkillers (with the exception of “Gas Panic!,” which he thinks contains some of his best writing), even “Wonderwall.” What, exactly, is so romantic about being, well, a wall? Nothing, really, but it forces you to envision a picture of what it could be. To imagine, to wonder.

‘I found it very easy on my first two records with Oasis to write about being young and rock and roll, because that’s the life I was living,” he says. “And now, I find it very comfortable to write songs about relationships. I think it has gotten more meaningful … and I find it, at the moment, very easy to be truthful. In the beginning, I found it very easy to be truthful, but in the middle part I found it very difficult. Because my truth was drugs and parties. My truth now is I am a bit more experienced and a long way down the road of life, so I write about that.”

Chasing Yesterday morphs Oasisisms into more mature terms – there are no Champagne Supernovas, but introspective metaphors. Noel will never write a story-song, but tracks like “Riverman” and “Ballad Of The Mighty I” use words as one of many picture-painting tools – it’s a type of craftsmanship that can even be seen on artists as far-reaching as Bon Iver.

There’s one particular track, however, that isn’t quite as obscure. “You Know We Can’t Go Back” is, on one plane, a love song with a big, booming chorus – but it’s hard not to read a deeper subtext into the title. There’s that lingering question: will you, can you, go back to Oasis?

“The title could not be any more self-explanatory,” he says. “I’m going to put it in vague terms specific to me, of course. It’s about fucking making decisions in life and standing by them. And to hell with the consequences.”

When Noel begins his set later, no one is looking back. There’s a three-piece horn section (complete with a s-a-x-o-p-h-o-n-e, Liam be damned) and plenty of people in the audience singing along to his solo tune “Do The Damage.” It’s not quite eight o’clock and still light out, and there’s something surreal about seeing him before sunset – especially during “Champagne Supernova,” where its hard not to flash back to images of Oasis playing the same song in the pitch black of Glastonbury in 2004. The presentation, with darting lights and an endless sea of people like fireflies in the night, had all the dictionary-definitions of “epic” going for it. But Liam, in a ridiculous white fur-lined jacket, led one of their most underwhelming festival performances to date. Lyrics were slurred, and both brothers seem bored.

This is different. It’s not Oasis, but the entire crowd is swaying along, and Noel is composed but passionate. He’s sweating, finally. ‘You’re fucking godlike!” shouts someone in the crowd. “You’re a legend!” screams another. He tells them he’s going to play some songs from the new album.

“That’s why you’re here, right? That’s why I’m fucking here,” he says, fully knowing that the question is partially sarcastic, and that the answer doesn’t really matter. They’re here, now, chanting along to both “Riverman” and the closer, “Don’t Look Back In Anger,” as if it’s a giant campfire.