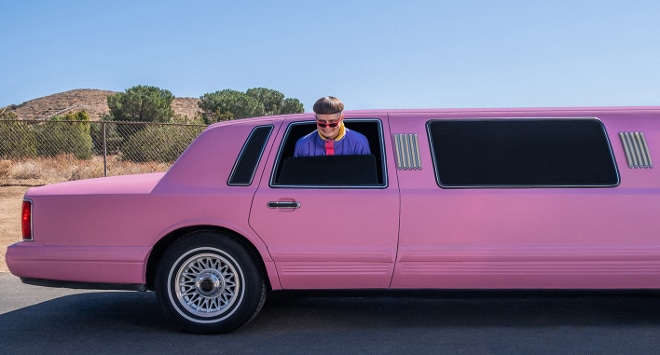 Oliver recently wrapped his impressive sold-out headline “Goodbye, Farewell Tour” which included stops in over 35 cities across North America and Europe, alongside jam-packed sets at major festivals including Austin City Limits and Life Is Beautiful.

Now boasting over 75 million worldwide streams and counting, Tree’s smash hit single, “Hurt” has already proven a multi-format radio smash, reaching the top 5 at Alternative outlets nationwide while also ascending to the upper reaches of Billboard’s “Rock Airplay” chart. The gripping companion video for “Hurt,” which currently has over 26 million individual views, was shot in Ukraine by Tree and co-director Brendan Vaughan. HighSnobiety premiered the video exclusively and raved, “There’s no mistaking Oliver Tree for anyone else because the Los Angeles-based artist is truly one-of-a-kind.”

Furthermore, Oliver made his solo late night television debut earlier this year with a groundbreaking rendition of “Hurt” – performed from atop a tall set of stilts – on CBS’ The Late Late Show With James Corden, hailed by Alternative Press as “an incredible performance that only Tree himself could pull off.” As if that weren’t enough, Oliver can currently be heard on a recent installment of the influential H3 Podcast, streaming HERE.

“Miracle Man” which arrived this spring, was joined by another eye-catching companion visual – self-written and directed, as usual. “Miracle Man” “is a roughed up alt-pop track that has a demoralized edge to it,” raved Ones To Watch. “The music video is bingeable – if you’re not watching it again, you’re diving into Tree’s other videos because they are undeniably entertaining.” Alternative Press said it best: “This song is everything.”