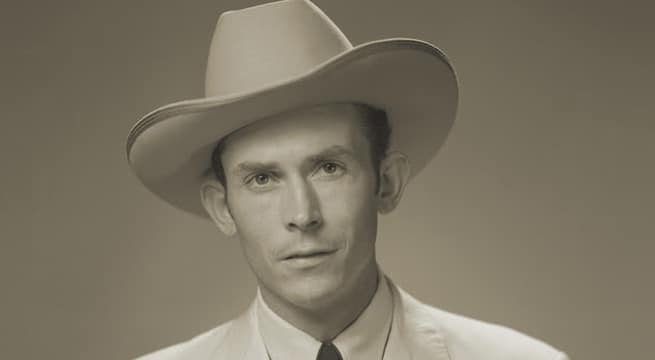 Hank Williams was a star of WSM’s Grand Ole Opry when he began hosting his own radio show for the same station in 1951. Sponsored by Mother’s Best Flour Company, the 15-minute broadcasts aired every weekday. But there was a problem: Williams was wildly popular and his aggressive touring schedule meant he couldn’t always be at the station to perform the show live. Many of the broadcasts were actually pre-recorded transcription discs that were aired and then forgotten. The discs were re-discovered decades later as they were being hauled to a dumpster! The find more than doubled the number of known Hank Williams recordings. With the popularity of Ken Burns’ Country Musicdocumentary series, interest in Williams’ legacy is currently spiking as a new generation discovers his unparalleled influence on America’s music. Even now, 66 years after his death, there is still more to discover about Hank Williams.

On February 7, 2019, BMG will release Hank Williams: Pictures From Life’s Other Side — The Man and His Music in Rare Photos and Recordings. The six-CD collection features 144 tracks representing the complete rundown of Hank’s performances from the existing transcription discs. While previous compilations have presented either a selection of the Mother’s Best material or all of the recordings in the context of the individual radio show presentations (along with guest vocalists and instrumental numbers), this is the first collection to gather the entirety of Hank’s Mother’s Best performances and presents them outside the context of self-contained radio programs. The compilation was produced by Cheryl Pawelski, and each track was carefully restored and remastered by Michael Graves. Together, they earned aBest Historical Album Grammy award for their work on Hank Williams’ The Garden Spot Programs, 1950 compilation in 2015.

The recordings are packaged in a slipcase with a lavish book that chronicles Hank’s career in photographs. With the assistance of Grammy nominee Scott B. Bomar and Hank photo collector Ken Campanile, the 272-page hardbound volume was assembled by leading Hank Williams expert Colin Escott, who wrote the definitive biography of the American music icon and has won two Grammy awards for Best Historical Album for his production work on previous key Williams releases. Hank’s daughter, Jett Williams, contributed a touching foreword that sets the tone for the collection of images.

To gather the photos, the team coordinated with Marty Stuart’s Congress of Country Music, the Grand Ole Opry Archives, the Center for Popular Music at Middle Tennessee State University, the Country Music Hall of Fame and Museum, the production company behind Ken Burns’ documentary, and various Hank fans and historians. They uncovered unseen images from the estates of other country stars of the day, including photos that had been saved by Hank Thompson, as well as fellow Grand Ole Opry star Little Jimmy Dickens. The Dickens collectionincludes two exceedingly rare color slides of Hank that are a striking testament to his vitality. Other color photos that were unearthed include a trio of images of Hank at the legendary Sunset Park in Pennsylvania and a strikingly vivid photo of Hank in bed recovering from back surgery. Additionally, a trove of fan photos was licensed from the Tom Sims Photo Archive, one of the world’s largest collections of country music photos, with tens of thousands of unpublished images of the legends of country music, primarily from the 1930s through the 1960s. The archive is exclusively represented by Reelin’ in the Years Productions, a one-stop shop for both moving and still images of the world’s most important musical figures from the past to the present at www.reelinintheyears.com.

In addition to the rare images, familiar photos of Williams are presented with a clarity not seen in decades. Pictures from Hank’s first professional photo session are presented for the first time since being recently re-scanned from the original negatives. Now-iconic images of Hank by Nashville photographer Henry Schofield have similarly been scanned from the original sources for the first time in many years. Even often-seen photographs of Hank pulse with a fresh vibrancy that will surprise even longtime fans. From newly discovered gems to beloved images, Hank is captured onstage, offstage, signing autographs, dining with friends, shooting dice, playing fiddle, meeting fans, and socializing with colleagues like Ernest Tubb, Minnie Pearl, Red Foley, Roy Acuff, and Eddy Arnold. Onephoto from 1951 shows Hank having dinner with a mystery woman at New York’s Copacabana. During the course of researching the photos, Escott discovered new information about Hank’s long-mysterious companion that is presented in the book as a rare new biographical detail about the singer’s short life.

Along with classics such as “Lovesick Blues,” “A Mansion on the Hill,” “Move It on Over,” “I Saw the Light,” “Cold Cold Heart,” “Long Gone Lonesome Blues,” “I Can’t Help It (If I’m Still in Love with You),” and “I’m So Lonesome I Could Cry,” the Mother’s Best recordings represent the only known versions of dozens of Hank Williams performances. Escott’s newly crafted liner notes offer fresh insights on Williams’ music and the Mother’s Best performances. The collection is an important addition to the legacy of the standard-bearer for country troubadours who died on New Year’s Day, 1953 at just 29 years old. Hank Williams: Pictures From Life’s Other Side — The Man and His Music in Rare Photos and Recordings capturesthe legend in a way that reminds of his enduring influence.

Pre-order at this link and receive a FREE bonus 7”

0
Written by Russell Dickerson, Parker Welling, and Casey Brown Do you feel like you’ve hit a creative stride with...
Read more
Articles

0
There are country artists who dutifully go to bed, set and double check their alarms and wake up shortly after the sun...
Read more
Articles

0
Ian Randall Thornton is a multi-instrumentalist, singer-songwriter, and composer that has developed a tremendous reputation as an emerging artist largely basted on...
Read more