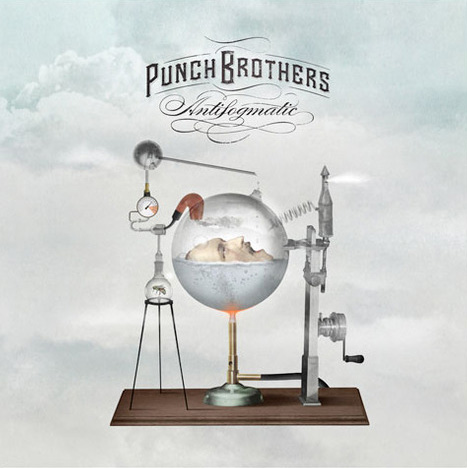 The first thing that stands out about Punch Brothers’ sophomore release Antifogmatic is its name. Taken from a popular 19th century alcoholic remedy for facing intemperate weather, the title offers a glimpse at the album’s tone, especially in contrast to the band’s debut record, Punch. Where Punch offered a more introspective and melancholy vibe via its four-movement centerpiece, “The Blind Leaving the Blind,” Antifogmatic is a more celebratory affair, while still maintaining a grounded presence.

This celebratory, joyful feeling permeates the interplay between each of the band’s virtuoso members. Much has been written about Punch Brothers’ musical prowess, and all of it is warranted. It is clear that the time spent playing together in support of Punch has only tightened their playing as a band, as the spaces between the notes on “Don’t Need No” and “Alex” attest, and the notes played everywhere else demonstrate.

While each member is given his due, it’s former Nickel Creek leader Chris Thile’s mandolin work and Noam Pikelny’s banjo picking that elevate the record to new heights in bluegrass, newgrass, or whatever kind of grass is being used to describe their sound. (“Woman and the Bell” shows off both players’ considerable skills most remarkably.) The album’s 10 songs, which were written collaboratively, clearly benefit from each player’s input, including Chris Eldridge on guitar, Gabe Witcher on fiddle, and relative newcomer Paul Kowert holding down the low end. Each member also lends their voice to create fine harmonies (with Witcher taking lead on “Don’t Need No”), and the bass vocals, used sparingly, are especially effective.

Although Punch Brothers’ musical chops stand on its own, Antifogmatic also delivers quality songs. “Rye Whiskey,” and “Next to the Trash” offer hummable melodies that stick with you (and the “Oh boy!” shout in “Rye Whiskey” is particularly catchy). Some of this pop relevance can be attributed to producer Jon Brion, who has worked with Kanye West, Of Montreal, and Fiona Apple,  among many others, but Brion is savvy enough to not to water down the exemplary musicianship for the sake of pop relevance.

Punch Brothers may not be striving for pop relevance, but Antifogmatic is a timely record. The album’s closer, “This is the Song (Good Luck)” sends us off with the words “good luck / these are tough times / but we’ll get by.” In these tough times, Thile’s words, and the album as a whole, are more effective than the titular tonic at staving off inclement weather, at least of the emotional variety. A strong dose of Antifogmatic goes a long way.