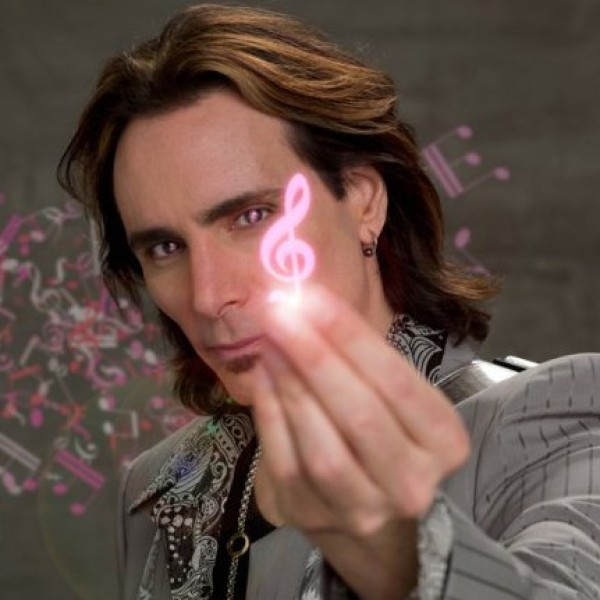 Whenever the topic of great guitar shredders arises, Steve Vai’s name inevitably comes up, usually first. Even as a central figure in the height of the Eighties shred movement, he was always more comfortable in a supporting role, admittedly happier when driving the sound of Whitesnake and The David Lee Roth Band while the flamboyant frontmen garnered the attention. Ironically, he now has one of the flashiest guitar styles and shows in the business.

On the other hand, he is a quiet student of the human experience and an unrelenting seeker of knowledge and spirituality. “I was always one of those guys who was a seeker of truth, I want to know what is going on,” he said in a recent Guitar World interview. His latest release, The Story of Light is a narrative thread whose characters search for the very core of their being. The light refers to a divine, inner light that dwells within all of us.

Far from just being a high speed and volume artist, his deep knowledge of music theory differentiates him from other shredders. An alumnus of the Berklee School, his complex chords and rich tonality are trademarks of his playing style. Now, over 30 years from his hair band days, he remains one of the most innovative players and one of music’s deepest thinkers.

There is a fairly complex story line on this album. Do you think listeners will understand it without the aid of lyrics?

Absolutely, I constructed it so that the first installments [2005s Real Illusions: Reflections and 2012’s The Story of Light]are basically Steve Vai solo records that people who enjoy the kind of music I do can just listen to without having to be clobbered over the head with esoteric stories and concepts. For those people who are interested in those kinds of things, you can glean certain elements of the story by listening to the lyrics, deciphering the liner notes, etc. But the goal is to, later on, take all three records and put the songs out in the proper order with more lyrics instead of melodies and some narrative so it’s an actual linear listening story experience

How is the conclusion to this trilogy coming?

I have an arc to the story that is completely finished. I know how I want it to end, who the characters are and the concepts I want to expand upon, but it’s a matter of time before it comes out.

Is your music as accessible as you would like it to be?

I’m very happy that I have an audience that’s supported me for many years and it’s the kind of thing where you’re going to be happy doing the thing you feel that you can do the best. I feel like I have certain musical instincts, desires and an inner ear. It’s my responsibility, like any other artist to find the thing you’re best at and do your best at it. I think my music is extremely accessible but everybody’s been brainwashed by modern pop culture.

You are a self-professed seeker of knowledge and spirituality. What are some of the most important things you have learned in your quest?

Everybody is on their own path. A person’s religion or spirituality or connection or non-connection with God is a very personal relationship. It seems to me that all the prophets that are at the core of all the world’s religions were usually very inspired people that were all saying the same thing. They were all saying very simple truths, but they had to use words and as a result the words get mixed up and they turn into religions and dogmas and rituals and ceremonies. Like anyone else, you read and hear things and you grasp on to the things that make sense to you in whatever state of awareness you’re in and then you form a belief system and that becomes a reality. Then that becomes your truth. I just see myself as a work in progress.

What are the keys to longevity and staying relevant as an artist?

Being very excited about what you’re doing and enjoying the music you’re making. That trumps everything else. If you are really compelled to create something (not just in the music industry, but in any business) if you find the thing that is really interesting, exciting and compelling to you, then you stick with it regardless of whether it’s accessible or not. You just stick with it. You can’t fail if you don’t give up. It’s that simple.

What is your primary goal as a musician as you age?

How did you make the jump from accordion to guitar as a child?

Because I fucking hated the accordion. I was like the good little Italian boy on Long Island. I liked the notes and melodies but I just didn’t like the structure of the instrument. My sister was listening to all this great rock music. I was in love with the guitar. I’ll never forget the fateful day when my father said, “OK. You can quit playing the accordion.” That’s when I went out and got a guitar

Did you feel like pursuing a solo career was a trade off or a natural evolution?

It was a very natural evolution because all the rock bands I was with, I really enjoyed and felt like my contribution was appropriate. I was comfortable and didn’t want to front a band. I liked being the guitar player supporting the singer. I got to live out a particular kind of fantasy, but I knew it was fleeting and ultimately I knew I was going to turn my back on that and start doing my own solo work because that was the most compelling thing in my psyche and desire. When it happened, it happened beautifully and naturally

Where do you see guitar technology headed now that there is an 8 string model?

Whatever the guy that comes along that’s going to do something different. It’s infinite. The guitar is an infinite instrument. Maybe someone will design a five string guitar and start kicking ass on that. It’s up to the imagination of the kid that’s maybe in kindergarten right now

How did your relationship with Ibanez come about?

When I was a kid, I loved Strats and Les Pauls, but they had limitations to me. When I was working with Zappa, I noticed that he barreled over all limitations and he was tweaking guitars and putting different things into them. I thought, “If I could just have someone make me a guitar that fits all of my desires”. So I went to this little guitar shop and I told them, “make me a guitar that looks like this: It has 24 frets but has a certain pickup configuration. Then I had a beautiful custom guitar that wasn’t a Strat or Les Paul but was more idiosyncratic to the way I wanted to play and the things I wanted to do that I wasn’t limited to on the Les Paul or the Strat. When I started playing in David Lee Roth’s band, all the major manufacturers were very interested in having me play their guitars. I sent out the design to a lot of the companies and they sent me back their standard guitars with a couple of little tweaks, except Ibanez. They gave me back the exact guitar I wanted and it hasn’t changed since. It’s been 26 years.

How would you compare today’s metal scene to your heyday in the 80s?

It’s a lot more brutal, heavy and dense, but there are all sorts of different kinds of bands. I don’t think it’s less creative. It’s just very different. It’s evolved. If you look at rock music in the 50s, then it progressed to acid rock and psychedelia in the 60s. When the 70s came, it got heavier because of all the progressive bands. And when the 80s came, it became even heavier as guitars became more prominent like the Van Halen sound. The 90’s were grungier.

Who was your biggest influence?

When I was a kid, Jimmy Page was my god. He had it all. He was very creative, a great player and had a unique sound. Jimmy Page is my guy.

Who are the key players in today’s metal movement?

I always thought Meshuggah was on the curve and they’ve been around for a while .There are these crazy kids in this band Chimp Spanner that are just doing preposterous things. I don’t necessarily listen to it because it stimulates me. I listen to it to see what’s going on, to see how things are evolving.

Do you feel these new bands are pushing the boundaries of the genre?

Initially you have to start with what people have done in the past. The new wave of metal bands is listening to the bands from 2000 but is coming into an awareness of what’s present. They’re saying, ’This is where we’re starting from, so where are we going to take it from here?’ I did that as a kid in the Seventies when I heard Zeppelin, Deep Purple, Hendrix, and Queen. Those great players were where I started from and I tried to throw my own spin on it and came up with the music I’ve come up with.