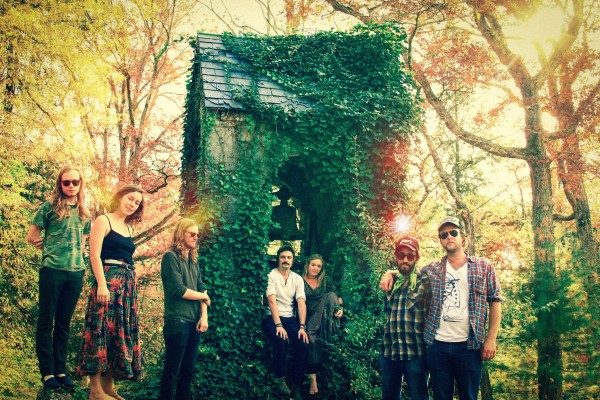 Full Of Grace: A Q&A With Wild Child

Their sophomore album, The Runaround, drops October 8 and showcases Kelsey Wilson’s and Alexander Beggins’ vocals and songwriting. Evan Magers (keyboards), Chris D’Annuzio (bass), Carey McGraw (drums) and Sadie Wolfe (cello) wrap layers of thumping, often raucous, often gorgeous sound around Wilson’s and Beggins’ voices that weave around and under each other. Beggins’ ukulele and Wilson’s violin provide the foundation for songs that explore loss, heartbreak, the arms-length bitterness and sweetness of a breakup, and love from the energetic and propulsive title track to the poignant and surprise-ending ballad, “Anna Maria,” to the whistle-and-stomp of “Crazy Bird.”

We caught up by phone with Wilson and Beggins in Austin a few days before the album’s release.

How long have you been together?

Alex: We’re coming up on our third anniversary on October 27. In fact, we did the album release for our first album one year to the day after we started up as Wild Child. We got close with this one, too. (laughs)

Kelsey and I met while we were on tour with a Danish band called The Migrants back in 2009. We thought, “Hey, let’s make our own music,” and the band grew very organically out of that decision. We asked our friend Carey McGraw to play drums and our friend Saide Wolfe to play cello; then we recorded our first album, Pillow Talk, and released it in 2010.

I had moved to Austin from Houston to go to UT; in high school I’d played in a few different kinds of bands, but never very seriously. When I got to Austin, I joined Grand Child and decided that this was a lot more fun than school and started traveling around with the band. I eventually came back to business school, but we kept playing, touring, and writing.

Kelsey: Yeah, we’d load up the van, and Alex would work on his assignments on the road. He’d put the books aside, and we’d start writing, and that’s when we found out how much chemistry we had together as songwriters; we couldn’t stop writing together.

How did you come up with the name for the band?

Kelsey: Well, we’d been in this band called Grand Child. Someone took a picture of us in the woods. When we looked at that picture we thought it was really cool, and almost right away we thought of wild—since we were in the wild—child as a good name for us. So, the name came before the band.

Alex: I’m so glad we didn’t have to spend a lot of time trying to name the band because coming up with a name for your band can take so much time and energy.

When did you each start getting into music? What instrument did you start playing? And who are some of your musical influences?

Kelsey: I played classical violin my whole life, but I was never super excited about it. I didn’t really like the music, and I felt like I wasn’t going anywhere with it. I put an ad on Craig’s List, advertising my services as a fiddle player in any kind of musical genre. I branched off into bluegrass, hip-hop, and rockabilly. I never sang a word before I started singing vocals for Wild Child; I was terrified. Sure, I did recitals when I was growing up, but I was playing songs other people had written, and I could hide behind my instrument. Once you start singing songs you’ve written, you feel pretty vulnerable. I’ll tell you what’s really very strange is that we’re getting to the point where people are singing the words to our songs along with us at our shows now. The first time I heard that I was really freaked out, and it’s still a little weird for me. I mean, we haven’t been around that long; at the same time, it’s really cool and gratifying to hear. Bonnie Raitt, Fiona Apple, and Nina Simone are some of my big musical influences.

Alex: I was never formally trained in any instrument. I was lucky to grow up with my dad, who had this elaborate music room in his house, with just about every kind of instrument in it. So I got to try a lot of different instruments growing up. He and I would just sit around that room and jam. I started out playing guitar in a punk rock band in high school and then a cheesy indie band. Until I joined up with Grand Child and met Kelsey, I’d never been a singer or a songwriter. The Beatles, of course, are an influence, but also Arcade Fire, Dr. Dog, and The Strokes.

The sound of the album is very organic. Tell me a little bit about the way you recorded it. How did you hook up with Ben Kweller?

Alex: Well, Ben Kweller found us. He had been looking for a new band to work with on his label, so he contacted us, told us he loved our music, and that he wanted to work with us. We had a few meetings with him, and it felt right and very comfortable for us; the rest is history.

Kelsey: We started work on the album last December or January. We really wanted to capture Alex and my vocals as organically as we did on the first album. So we did build the sound organically. He and I would put on our favorite onesies, bring in our favorite whiskey, and sit on the floor with mikes and record the vocals.

Alex: The sound on this album is bigger and louder than our earlier ones. Evan Magers joined us to play keyboards and Chris D’Annuzio joined us on electric bass, and our sound is now larger and reflects our live shows.

Kelsey: Well, while we were recording the album we’d drink Fireball whiskey, the kind that has that cinnamon flavor; there’s a rumor that cinnamon helps soothe your vocal cords. Now, though, people give that kind of whiskey to us because they think it’s our favorite. (laughs)

You co-wrote all the songs on this album. Do you have any particular methods or approaches to writing songs?

Kelsey: Well, this time around we have written songs by e-mail for the first time ever. We usually get together and hole up to write. Alex writes the riffs, and he and I work on the melody, and I work on the lyrics. It really is a two-part deal.

Alex: Yeah, you’re the bread on butter. With this album, we were still writing when we went into the studio to record.

Kelsey: One of the songs on this album, “Left Behind,” was already written somewhere in the universe. I had written the lyrics and not yet shared them with Alex. Alex e-mailed an instrumental he had just written, and my lyrics fit perfectly with it. We didn’t change it at all before we recorded it.

You’ve been at this a short time. How do you think your music has evolved since you’ve been together?

Alex: Our sound has evolved to fit our environment. We were playing a lot of small bars and clubs where quiet folk music just doesn’t fit. That’s one of the reasons we added Chris on electric bass so we could get that bigger and louder sound.

Kelsey: Yeah, we were kind of getting tired of playing in noisy bars where drunk people weren’t listening to our quiet music, so we started to have some fun playing our songs rowdier, faster, and louder.

Alex: We always want to keep those songs that are quiet and beautiful  — “Victim of Charm,” for example, on the new album — but we’ve adapted our sound on this album to reflect, like Kelsey said, our live shows.

Alex: We’re going to be touring like crazy the next few months; we’re trying to set up a European tour, too.

Kelsey: I really want to do a hip-hop album and an R&B, soul album. I hope down the road we can do one of those.