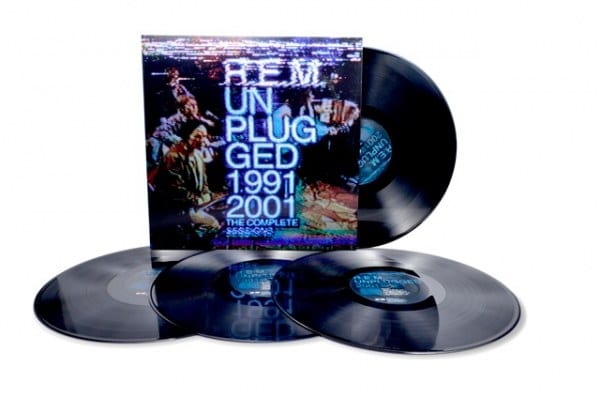 When R.E.M. put a period on their career as a band in 2011, it didn’t take Einstein to figure out what would happen next: another sweep through the vaults for any potential anniversary-reissue bonus tracks or other overlooked material.

One also doesn’t have to be a genius to deduce that most bands reconfigure and repackage their work for three main reasons: contract fulfillment, revenue and/or ego. Regarding quality enhancement or format updating, see reasons two and three. In those cases, demand is another valid reason; in fact, Universal Music Enterprises and Warner Bros. Records just announced on May 28 that they’ve partnered to remaster and release R.E.M.’s entire catalog for iTunes.

But just before that, R.E.M. released the digital and CD versions of another album package that contradicts this cynical-sounding analysis. R.E.M. Unplugged: The Complete 1991 and 2001 Sessions, is about as far from bottom-of-the-barrel scrapings as a hologram is from a breathing Michael Jackson. Originally released on vinyl in April for Record Store Day, this collection is a first-time offering of the band’s appearances on MTV’s famed “Unplugged” show. Until this year, these performances had not been committed to disc or sold commercially (legally, anyway). Whether they were holding out on us or couldn’t get rights clearances doesn’t really matter now; the music is here, and you need it. By stripping their work to its most elemental form, this collection expresses their artistry in a truly definitive way.

For any R.E.M. fan, sitting in the audience at an intimate unplugged performance would have been a holy-grail experience. Those who were lucky enough to attend either — or both — of these tapings certainly knew they were witnessing something special, especially considering how groundbreaking the show was when it first went on the air in 1989. A video trailer on the band’s site shows the first taping followed the initial format concept: a truly unplugged gang of musicians sitting on barstools, strumming away. Berry played congas, not a kit, and it changes the dynamic considerably.

The only band to appear twice, R.E.M. taped “Unplugged” sessions in 1991 and 2001. In those 10 years, they went from a well-respected band finally earning serious mainstream recognition with their first No. 1 album, Out of Time, to one of the biggest bands in the world. They also went from a collaborative four-piece to a three-piece after drummer Bill Berry left in 1997. On the first session, the foursome was accompanied by longtime auxiliary member Peter Holsapple; in 2001, Scott McCaughey, Ken Stringfellow and drummer Joey Waronker helped out.

For the second show, they stood behind mics, and Waronker played a drum kit; there’s a fuller sound overall. But they still played to a small roomful of people—fans included; they pushed to assure it wasn’t an industry-only (read: inattentive) audience.

Though these songs cry out for DVD treatment, this audio-only collection is still an unparalleled document. First, there’s the incredible clarity the acoustic treatment gives each song; for once, every single lyric Stipe sings is absolutely distinct. There’s not a hint of the murkiness he was accused of in the days when Murmur was sometimes referred to as “Mumbles.” This gives them startling intensity; even if you thought you knew every word, they somehow gain new layers of meaning in this laser-focused milieu. The same effect occurs with the melodies; delicate nuances and textures are exposed in these tracks that enhance them in unexpected ways. The Beatles/Beach Boys homage “At My Most Beautiful,” for example, is pristinely elegant, and “The One I Love” becomes an understated ballad with Mills exquisite piano work by Mills.

Like silvery fish darting through a cold mountain stream, these songs shimmer, ranging from beautiful to transcendent, as in “Endgame,” a nearly wordless melody from New Adventures in Hi-Fi that’s just gorgeous.

The very fact that the entire album starts out with a mandolin riff in a song whose other lead instrument is a hurdy-gurdy-like organ (“Half A World Away”) emphasizes just how different R.E.M.’s musical sensibilities were. At the time, no one used mandolin in rock, much less as a lead instrument. Throughout these sets — which contain 11 songs not in the original broadcasts — we hear a band whose blend of pop and rock literally did give us new musical adventures.

“Radio Song” is one more example; the original contained KRS-One’s rap injections, unheard of at the time. The “Unplugged” version leaves it out, but still bubbles with energy. Some people would say the rap is not missed; I loved that version, but this one earns it renewed appreciation. Likewise with “Pop Song ‘89” and so many others. Even “It’s the End of the World As We Know It (And I Feel Fine)” contains a new edge in Stipe’s repetition of “Fine. Fine. Fine. Fine.” that belies the song’s buoyancy. The soaring “Fall on Me” — the prettiest song in their entire canon — along with the Mills-sung cover of “Love Is All Around” and unbroadcast additions such as “Swan Swan H,” “Get Up,” the instrumental diversion of “Rotary 11” and “World Leader Pretend” — are the crowning touches that make the 1991 half alone an essential R.E.M. release.

But the 2001 half is equally strong, with incandescent deliveries of “All the Way To Reno (You’re Gonna Be A Star),” “Electrolite,” “Daysleeper,” “So. Central Rain (I’m Sorry),” “At My Most Beautiful” (complete with banjo plucks), “Losing My Religion” and “Imitation of Life.” Just the “leftovers” alone would make a fine EP; the only possible reason “ “The One I Love,” “I’ll Take the Rain,” “Sad Professor” and the others could have been left out is time.

As hard as it is to accept — still — that R.E.M. decided they were out of time, at least they’re leaving us wonderful gifts like this one, which may replace the original recordings as fans’ go-to versions. Better late than never, guys. If there’s anything else this wonderful sitting around, please refer to reason No. 4 and feel free to give it up.