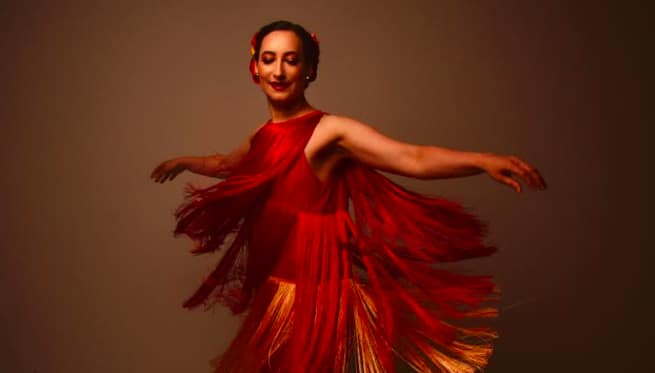 Songwriting has been a cathartic exercise for many artists, and in the face of a endometrial cancer diagnosis it was exactly that for Rachael Sage.

Sage was told by her doctors of her situation in early 2018. It halted a tour. It halted almost everything.

It did not halt her spirit.

“Bravery on Fire” is the first song from her upcoming album “Character” out March 6 of new year. It was written while she was undergoing chemo, radiation, and surgeries. It is being released early to help raise awareness of endometrial cancer, which was the most common type of women’s cancer with more than 60,000 diagnosed cases last year and this project will give 100% of the proceeds will go to women’s cancer research.

“Bravery’s On Fire” is about realizing that there is strength in admitting one’s vulnerabilities,” Sage told American Songwriter. “In embracing authentic self-care and all that entails. It is about having the courage to express what you actually need, and what you know to be your own truth – even when it is difficult or you are afraid of letting others down.

“In short, it is about honoring one’s true self by admitting when everything is far from “ok”. It is about resilience, and was the first song I wrote after regaining my energy, during my recovery.”

The opening line sets the tone for the song, “I am not entitled to anything,” she sings. The spirit of gratitude permeates chorus and verse as Sage weaves though an emotionally driven ballad that spans a very broad range inspired by her battle.

The video is directed by longtime collaborator and award-winning filmmaker Tom Moore. It is an emotional, cinema verité window into her battle and recovery. It shares a powerful message of hope with gravitas.

Sage impressively wrote a song that can make you sad as well as make you grateful — while feeling empowered to do anything.

“Sometimes in life, we are faced with unexpected challenges that prompt us to realize just how fortunate we have been, and how very much we have taken for granted; yet in the midst of all of that, a silver-lining of growth and gratitude nonetheless awaits,” Sage said. “This past year, I was diagnosed with cancer, during a routine exam. I had just gotten off the road from a 2 month tour with one of my childhood idols, and had never been more fulfilled creatively. Yet the instant I heard the words “Rachael, you have cancer”, all of that changed, and I found myself not only facing the physical implications of treatment, but also the additional pressure of trying to explain to others in my life to whom I had always been “the strong one”, that I was in fact, in a very serious crisis that required me to focus solely on my health and well-being, period.

“Having always been in a leadership role – whether running my record label MPress, helping produce other artists or, admittedly, often as the “solid”, “together” partner in my past romantic relationships, I suddenly felt myself grappling with not only physical issues, but the emotional pressure of everyone else’s needs and expectations.”

100% of all proceeds from “Bravery’s On Fire” benefit Women’s Cancer Research at Memorial Sloan Kettering and Massachusetts General Hospitals, where Sage received her cancer treatment.