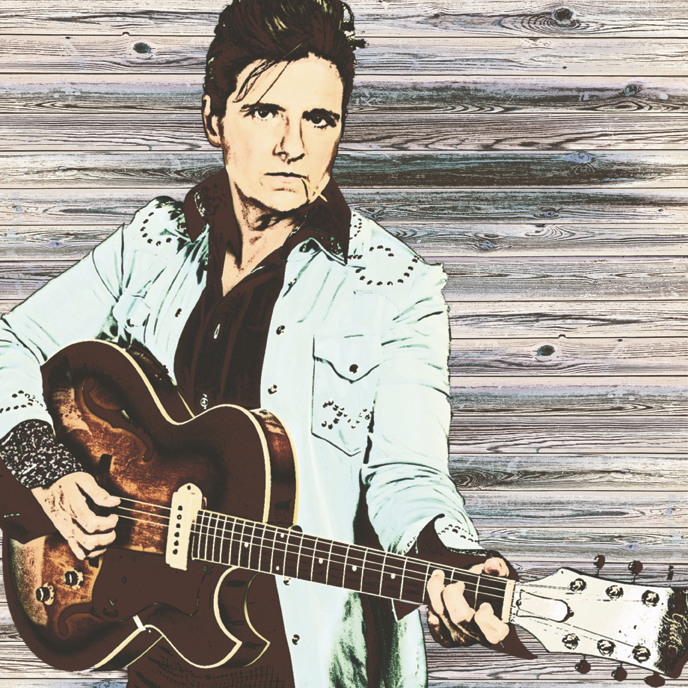 With A Rebel Yell: An Interview With Amy Ray Amy Ray is a rebel. The South is her heritage and rule-breaking is her birthright. As the darker half of Indigo Girls (with Emily Saliers), Ray has always infused her songs with a certain measure of defiance, either personal or political — or both sewn into one seamless, artistic tapestry. That’s the folk singer way, though, speaking truth to power in a palatable, if often polite, manner. During the times when she has stepped out of the Indigo Girls framework and into her own solo projects, Ray has stepped into the full-throated, fist-pounding stance of a punk rocker. That is, until now.

With her latest offering, Goodnight Tender, Ray inhabits a wholly new persona — that of country raconteur. Despite those well-established rabble-rousing tendencies, it would be a stretch for these songs to earn her the brand of an outlaw… at least an outlaw in the grand tradition of Johnny, Willie, Waylon, and Merle. Regardless, there’s a meandering easiness to the tunes that signals Ray is right at home surrounded by the giddy pluck of a banjo and the woeful wail of the pedal steel. There’s also a contented weariness to the performances that indicates Ray is perfectly happy with her hard-fought, hard-won lot in life — singer, songwriter, activist, and, most recently, parent.

I don’t think I’ve ever told you this, but I came out — or, was outed, actually — for the first time after an Indigo Girls show at the Greek Theatre in Los Angeles in 1992. Walking back to the car, my best friend at the time asked, “What will your parents say when you tell them you’re gay?” So, I don’t know who I’d be without having had you and Emily, and k.d. lang to look up to. You must have heard a thousand stories of gratitude like that over the years.

That’s very nice of you to say. When I hear stories like that, I usually just think about when I came out. I didn’t really come out all at once. I was just dealing with it since high school, had girlfriends, and eventually talked openly about it with my parents, little by little. But I had an easier time of it because my two older sisters are also gay. My parents definitely had a really hard time with it, at first. But, I’d say that, because I had these two older siblings and some people to help me… in some ways it made it easier and some harder because, I’m sure, for my parents it was like, “Whoa!”

Yeah. For me, it felt like it diluted the wrath a little bit. But then they came around, and they are really awesome and supportive now. Just really great. I got lucky.

As a role model and icon to so many fans looking for a reflection of themselves out in the world. How do you carry and live up to that responsibility? Because I know you feel it.

I just try to be honest. I don’t try to look at it as this huge deal that I have to live up to, or be a super-person, or something like that. I take seriously the movement and the activism around it, but only as an individual person, not with a mantle of greatness and responsibility. Because I feel like the best thing we all can do is just be really good individuals and try our hardest to do what we can in our communities within the context of any activism — any kind of human rights activism, or environmental activism, all the things that we aspire to do to make our world a better place and our communities stronger. So I recognize that we have been in the public eye and it’s an honor, in some ways, to have that success, to have the support of the gay community-at-large. I guess we just feel like we live our lives in an honest way, and we make mistakes — everybody makes mistakes. But we just try to be the best people we can be.

Throughout your career, you’ve also mentored other up-and-coming artists like Danielle Howle, Rose Polenzani, Athens Boys Choir, Girlyman, and others through your Daemon Records label and opening slots on Indigo Girls tours. How did that feel — stepping into the role of mentor?

Yeah, the opening slots, the record label… I don’t look at it as a one-way mentoring thing, though. I look at it as, if you have success, you should always be trying to pull people up. And there are always going to be people above you, as well. And there’s always something to learn from a young band, musically and as far as their outlook goes, the way they approach their careers in comparison to yours. There’s always something to be learned, so it’s not a one-way street. I think we should be helping other bands out when we have the opportunities to do that because other bands helped us. I also know that we benefit from it in a pretty big way so it doesn’t feel like this thing where, “Oh God, we have to help another band out.” We’re fans of a lot of bands. So, because of that, we want to play with them.

Did you intentionally include a lot of female artists on your Daemon roster?

No, actually. It wasn’t intentional. It was just the way it happened. That’s just kind of my world, you know? And I had a large number of female artists, and a large number of artists that were sort of, I guess, outcasts in some ways for some reason — different musically or personally or culturally. I definitely didn’t set out to do that because the only parameters I wanted to have were that it was a left-of-center label, and whatever reason you had for being left-of-center would qualify you for that.

I would say you succeeded in clearing that bar. When you set up your label, there weren’t a whole lot of artists going that route, other than Ani DiFranco. What was the catalyst for doing so?

There were some other labels — not artist ones — but I looked to DB Records, which was Danny Beard’s label in Atlanta and a pretty cool label that did some great stuff in the alternative community. And then, of course, Sub Pop was going on and Touch and Go was happening. There was a big scene in DC with a lot of stuff happening, so the punk scenes were more what I looked at, as far as what’s the path and how do we run the label. So, Fugazi and Ian MacKaye and those guys in DC who had the punk scene going were doing things in a very co-op kind of way and I liked their example, the way they did things. And, then, everything else was just, “What would be the ideal thing if I were the artist?” It was really like, “Okay, I have some money and I know a little bit about this, and there are all these bands that I really love.” And, at the time, it wasn’t as easy to put your own music out or have distribution or anything. It was just like, “Let’s start and see what happens and go a little bit at a time.” I made a lot of mistakes in the beginning. I spent too much money sometimes… a lot of mistakes about how to release records, so it was a long learning curve for me. I was so busy with Indigo Girls and everything that was going on that it would take me a while to learn from the experience, I guess.

But, now I know a lot more, and I wish I had the money now that I had then and I could recreate the experience and not make so many mistakes. At least I have the knowledge now. Mostly, I’ve put my own stuff out over the past five or six years. And I think, at some point, I’ll take a break from putting my records out and start putting other people’s records out again. I’m really interested in archiving different scenes and figuring out an angle for that, because I really love archival collections of bands and songs you wouldn’t normally get to hear — things like sounds from a certain region or time period.


That’ll be an interesting thing to see unfold.

It’s for my old age.