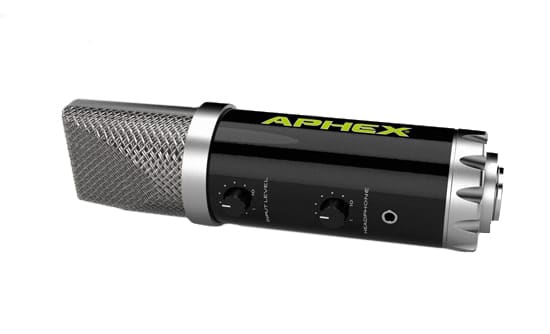 Aphex is known for its top-notch audio signal processors found in professional studios around the world. In fact, Aphex developed the well-known Aural Exciter and other ‘psychoacoustic’ processors that enhance the vocals on hit recordings and the voices of radio and television personalities. Now, they’ve built their renowned analog effects into a quality USB condenser mic simply labeled: Microphone X.  While most professional recording engineers are not fans of USB mics, this one could turn some heads.

Physically, Microphone X is about 7 inches tall with a solid feel and weighs about 15 ounces. It’s a studio mic with a barrel shape so requires a special mic mounting clip which comes in the box along with a mini tripod for desktop use, 6-foot USB cable,  user’s manual and protective carrying pouch. Also bundled in is free Reaper DAW and the Harrison Mixbus DAW software. Microphone X requires Mac OSX 10.5 and higher and comes with drivers for Windows XP SP3 32-bit and Windows Vista SP2 and Windows 7 SP1 (32/64 bit).  Power for the condenser mic comes from your PC and Aphex claims that a fully charged iPad can power this microphone for approximately five hours.

For the techies, this is an electret condenser microphone with a 16-mm capsule and a low-mass diaphragm. Its electronics provide a full 24-bit/96kHz conversion (better than many other USB mics that offer only 16-bit/44.1 kHz conversion). It can handle a maximum SPL of 120 dB so it’s ideal for recording vocals. You might even want to try it on some acoustic instruments. This mic picks up in a standard cardioid pattern, so behaves like a typical vocal condenser mic. Something that surprised us was that, unlike many condenser mics, Microphone X works best when you are up close on it—at about the same distance as a dynamic mic. Because of this, you’ll want to consider using a pop filter to get the best results.

Now, what’s really different about Microphone X are the controls. On the front of the microphone body you’ll find an input level control and a headphone volume control along with a 3.5 mm headphone output jack making it easy to monitor your recording. (Note that you will need to change the microphone output in your PC settings to use this.) On the back of the microphone, however, is where things get really interesting. There, you’ll find a button to activate the built-in optical, analog compressor which limits the dynamic range of the input signal. Professional recordists use compressors to prevent clipping and put more “punch” in the recorded sound. Another button activates the unique Aural Exciter and the Big Bottom processors. Used sparingly, these processors can enhance your recorded voice making it sound bigger, more present and really bringing it to the front of a mix. However, be advised that it’s best to tweak a little at a time especially with this mic’s small knobs, because it’s easy to overdo it. Having processor controls right on the mic make it easy to compare or “A/B” before you start recording to hear how much processing is helping your sound and how much is too much.

With mini versions of  Aphex analog processing built into this very portable USB Microphone X, you can create a vocal track that will really stand out—and you can do it without a rack of expensive effects processors. Yes, you would have ultimate control with the individual rack units (that’s why studios have them), but the Microphone X is a solid condenser mic with the convenience of USB and built-in, upscale analog processing that’s great for your home or location recording. 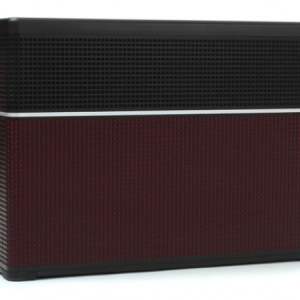 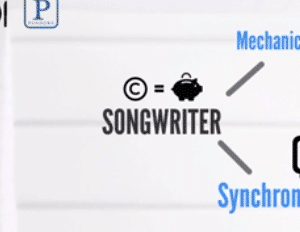