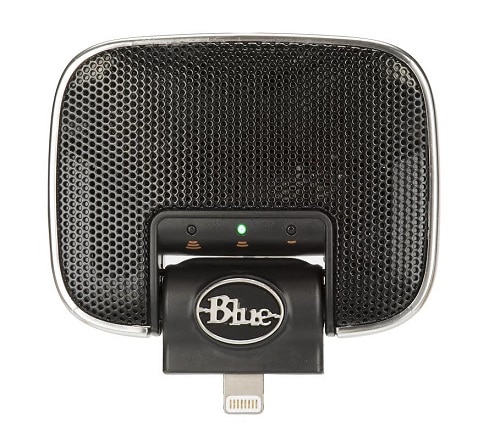 Blue Mic’s Mikey Digital is a stereo microphone designed for iPad and iPhone, and has been available for nearly a decade. Blue recently updated Mikey for compatability with ios7 via Lightning connection. It’s perfect for singer/songwriters looking to sketch out quick demos or live recordings and who want the recording quality to be a step above the iPad/iPhone built-in microphone. Sure, those mics are great for capturing your quick vocal song ideas and sketches when inspiration strikes, but you’re getting a mono recording that often misses the clarity and bottom end.

Mikey is small and compact, and features pair of condenser microphone capsules with 16 bit / 44.1kHz analog to digital conversion, housed in a shockmount and grille. It has a 1/8” connection for line inputs and a USB connection, which charges your iPad/iPhone when in use and maintains the battery level during long recordings. A cloth carrying bag, user guide manual and a ¼” to 1/8” guitar jack adaptor are also included. Mikey has a swivel hinge with seven positions and a 230-degree rotation- good for positioning to your sound source. Mikey connects to the iPhone or iPad via Lightning connector on the bottom of the device. A simple 3-position switch gives you three gain settings to choose from when setting up a recording.  This is very convenient, as Mikey’s automatic gain control means you don’t have to do much adjusting within the recording app you’ve chosen to use. The loud setting is low gain, for recording loud sources (100-130 db range), the middle setting is the default auto setting, and the third setting allows you to capture quiet and intimate sound sources (45-60 db range). Mikey lets you know when the recording level is too hot, with three flashing red lights indicating overload.

For our test, we recorded on an iPad (latest generation) at an open mic filled with performers as varied as male and female solo acts, acoustic duos and a rock band or two. Mikey is compatible with various recording apps. We varied our recordings using either the Camera app or Garageband. Overall, I found the middle Auto setting to be the most consistent for best sound level. The recordings had a nice depth to them, especially on the acoustic acts, while also eliminating some of the crowd noises behind me. There was also a warmth to the recording that the iPad’s internal mic didn’t add. I wouldn’t be surprised to see a few bands posting their recordings using Mikey on Soundcloud, YouTube and other sites. 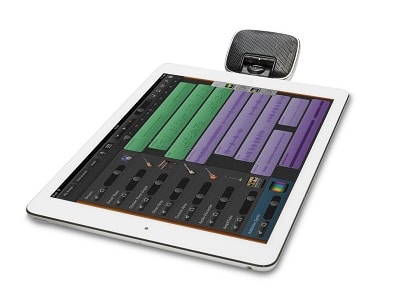 The 1/8” adaptor (included) allows you to connect a line input source such as a guitar for direct recording, bypassing the microphone. We used two guitars separately to run our in-house test- an Ibanez acoustic equipped with a B-Band pickup, and a Gibson J100 with LR Baggs Anthem. This allowed us to A/B whether any sound level inconsistencies on the recordings were due to each guitar’s pickups or Mikey’s levels. The connection of the adaptor to Mikey seemed a little loose and precariously balanced with the weight of the ¼” guitar cable. This gave me some concern as I didn’t want my creative flow to be hindered by a mechanical nuisance. But I was able to properly balance the cable on top of the mic at an angle. Since the guitars themselves have a pickup volume control, you are introducing another gain structure into the recording path. After a quick adjustment between Mikey’s levels and the pickup volume we were able to get a good setting on the Auto position and Mikey did a good job capturing the sound of the guitars. Hitting the guitars hard consistently on the low end, though, made me switch to the low gain setting to get a better recording level and sound. Overall, I suspect that most musicians looking to record just a guitar part will rarely use the 1/8” adaptor and opt instead for the stereo microphone setup, which allows you to capture more than just your guitar or other connected sound source, and provides good quality fidelity. However, I did do a quick test of recording my old cassette tapes into Garageband with the 1/8” adaptor and it sounded close to the cassette source, so the adaptor is a nice feature.

There is a minor downside to the design, though it is in part not related to the actual microphone itself. I was not able to attach via the Lightning connector without removing the iPad cover (an inexpensive but sturdy plastic $5 cover purchased at a discount store). The solution would be either to remove the cover every time you use it (an annoyance for sure which also leaves the iPad/iPhone vulnerable) or purchase either a different cover that leaves room at the connection area, or a Lightning dock extender. Another minor nuisance is there is no line out to monitor audio as you’re recording.

Mikey is aimed at those who are looking for an easy and quick setup time with minimal recording knowledge needed. Its portability and on-the-go mobility for getting a nice recording gives you the extra sizzle you need for your music compared to the iPhone/iPad’s internal mics. 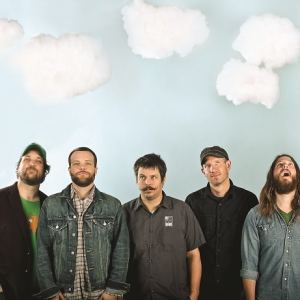 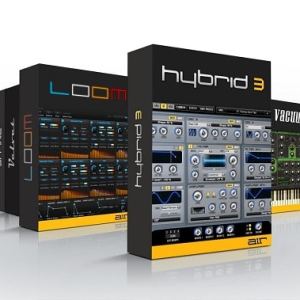