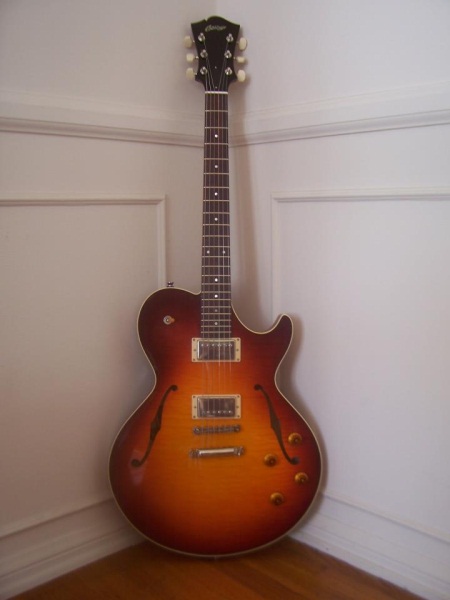 Collings Guitars of the acoustic variety have certainly caught on among players in the know, and their more recent foray into the electric guitar appears to be following suit. We were sent a newly released SoCo 16 LC for review, and it is easy to see why Collings’ electrics are catching fire.

While the single cutaway silhouette is borrowed from the more upscale SoCo deluxe, the plainer SoCo 16 LC lacks some of its older sibling’s appointments: headstock and fingerboard binding, custom knobs and pickup surrounds, and deluxe fingerboard inlays. But the real difference between these two models is more than skin deep.

The deluxe version is made with the back and sides being routed in solid mahogany to form the tone chambers with a top carved from a thick piece of solid maple. The SoCo 16 LC is made in what one could assume is the more labor intensive manner similar to a conventional hollow body guitar with the sides being bent and attached to the top and back with the traditional internal kerfing.  The LC in this model’s name most likely refers to laminated maple used for the construction of the body.

It should be noted here that laminated wood is the traditional material for a semi-hollow body guitar and has been since its creation. The rigid body material helped to reduce feedback which has plagued guitarists ever since the birth of electric amplification.  To further assist in this endeavor, a solid block of maple extends down the center of the instrument beneath the Jason Lollar Imperial Humbucker pickups and the Tone Pros bridge and stop tailpiece.  The end result comprises the best aspects of hollowbody tone with solidbody sustain – and all but eliminating feedback, or at least making it controllable … and usable in musical ways.

Our review guitar is finished with nitrocellulose lacquer on the flamed sunburst top and faded cherry back, sides and neck, with nary a flaw to be found. Ultra-clean cream binding accentuates the top and the back of the single cutaway body which has a resemblance to the Telecaster on the upper bout. The back’s binding includes the neck’s heal cap: a nice, classy touch which accentuates the body shape.

A rosewood fingerboard with dot position markers sits upon the single piece mahogany neck, and the large ebony faced headstock with its asymmetrical outline is reminiscent of both D’Angelico and Epiphone guitars from the days when big fat hollowbodies ruled the earth. The enclosed Gotoh tuners have grained ivoroid buttons and the Collings logo is inlayed into the top, hinting that this is more than just a run of the mill instrument.

Overall, the Collings SoCo 16 LC is an understated instrument. But with the flamed top, slender f-holes, stunning finish and graceful body design, the end result is sheer elegance.

Light and responsive acoustically, the first few chords and single note runs had this writer double checking to see if in fact this SoCo had a center block.

Once plugged in, the guitar responded in the same way.  While the guitar’s construction follows that of the Gibson ES-335, the guitar response was more like that of the fully hollow Epiphone Casino. Running the SoCo into a Fender Twin Reverb with the bridge pickup selected and power strumming a G7sus4 was rewarded with a “kerrang” of attention-grabbing tone.  However, (and thankfully, unlike the Casino) the SoCo is feedback resistant … and sustains longer thanks to the locking stop tailpiece.  Overall, the feeling is as if the guitar is alive.

The neck pickup, while somewhat warmer, still exhibited a bright top end which provided plenty of definition. Nice creamy textures were availed by overdriving smaller tube amps with the neck pickup. Rolling back the well-tuned tone control availed more conventional jazz tones which could be further exploited with a set of flatwound strings.

The SoCo’s set up was dead on. The C shaped neck with its superbly dressed frets is extremely comfortable to play and the .011” gauge strings could still bend easily thanks to the 24.75” scale length.

It would be tempting to order a SoCo 16 LC with P-90 pickups to try to capture the final bit of a vintage Casino vibe, but with the tonal versatility of the Lollar pickups, the hum resistance and the lightness of the SoCo 16 LC’s construction, perhaps this isn’t a recipe to be messed with. For many guitarists the SoCo 16 LC might not just be the new guitar, but the guitar: the desert island one.

P.S. While it is the guitar being reviewed and not the guitar’s case, it is worthy to note that the Collings SoCo 16 LC’s Ameritage case is so nice that it almost deserves a case of its own.