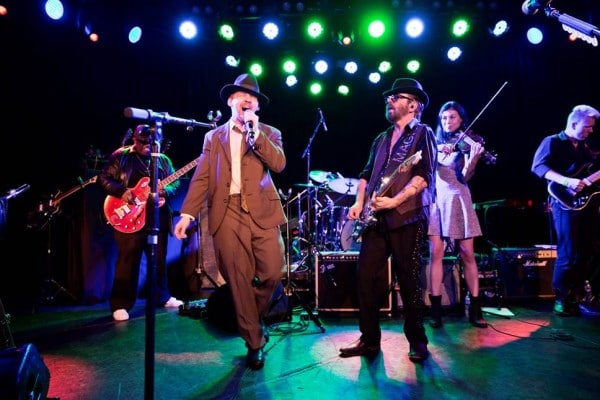 It was a momentous night for many reasons, including the second official American performance of soul wunderkind Hollie Stephenson, and the new debut of the amazing guitarist-singer Molly Tuttle. Not to mention a tremendously spirited show by Dave Stewart, bringing new classics such as “Beast of Fame” with older ones, like “Sweet Dreams Are Made of these”  and “Here Comes The Rain Again” with a band of stellar musicians.

But the big revelation of the night was the performance by Thomas Lindsey, Dave’s most recent discovery, a singer from DeRidder, Louisiana who is simply phenomenal, possessing an ethereal yet powerful voice unlike any other. First of all – the range – the man sings in that angelic  high range where Aaron Neville resides, not falsetto but full belting voice, yet with  a bluesy edge and vigor all his own. When he started wailing on the first song he sang, “Leave This Town,” the crowd was stunned. It was a new sound , rich in Southern resonance and deep blues, but all about now. “27 years of misery,” he sings from a well of soul so deep as to be startling, and ideally compounded by Dave on razor-sharp electric slide guitar. Pure, electric passion.

They soared through several new songs that they wrote and recorded as the newly-dubbed duo of Stewart & Lindsey, and as Dave, who Dylan has called a “fearless” guitarist, played stinging guitar leads as Thomas whirled and danced onstage, summoning the old Delta ghosts of blues and soul. Even when doing sad songs (“maybe the saddest song ever,” Dave announced)  such as “Friendzone,” it was a joyous performance, the arrival of a brand new star on the scene, fully formed.

Afterwards I spoke to some of the band members for their professional response to Thomas.  The result was unanimous awe. “I have played with everyone,” said legendary bassist “Detroit Mike” Bradford, who indeed has played with everyone from Anita Baker to Madonna and beyond, “and I have never heard anything like this. And I have heard everyone.”

Jimmy Z., the legendary sax-flute-harmonica master who has performed with everyone from The Eurythmics to Tom Petty to Etta James, simply shook his head in disbelief, and uttered three words: “Freak of nature.”

Given the exultant spirit of his performance, it was surprising how many sad songs were delivered. Misery and loneliness are at the heart of these new songs. But such is the nature of real rhythm & blues.  Asked afterwards the source of this sorrow, Thomas said, “Well, we all live through misery, though loneliness. But music makes it better.”

Indeed it couldn’t get much better, this singer plucked out of the obscurity of a tiny Southern town to sing with a band of amazing musicians on one  of Hollywood’s most famous stages. Though confident of his abilities, he admitted later that he’d been nervous all day, and through rigorous 8-hour rehearsals. But those nerves were nowhere to be seen onstage at the Roxy, and like John Lennon’s admitted stage fright before each show, it seemed to only fuel the passion.

Hollie Stephenson opened the show with a short set of her classic retro-soul, a 16-year old singer of amazing power and grace, who wooed the standing-only crowd, and commanded the big band like a veteran of decades.

Dave shared the stage also in mid-show with another new discovery, guitarist-singer Molly Tuttle, a North California native who sings with the gentle authority of Gillian Welch, yet plays astoundingly fleet flat-picking guitar like Chet Atkins on superdrive . With Dave she did a tenderly sweet version of Dylan’s “I’ll Be Your Baby Tonight,” and then a great solo turn on a Townes Van Zandt gem, and one of her own, “Devil On My Mind,” which featured the beautiful  Ann Marie Calhoun on haunting violin.

All of it happened on the saddest anniversary in the music world, the day on which John Lennon was shot and killed 37 years earlier. To commemorate the date, Dave related a tale of being on a tour plane with Annie Lennox and the Eurythmics when the plane caught on fire. “Suddenly there is a lot of smoke,” he said in his distinctively  understated British manner, “and we thought, well, we are going to die. Smoke everywhere. But somehow they landed this plane. We came out into the airport and the very first thing we saw was the news that John Lennon had been killed.”

Dave is the ideal ringmaster of the musical circuses he conjures, prowling the stage like a lion, and playing pointed electric guitar leads, sometimes not singing on guitar, but talking, and with a soulful clarity. Always a genius at shining the light on other musicians, as he did with Annie Lennox in the Eurythmics, he brought out his 14-year old daughter Kaya Stewart (who recently signed a major record deal). Like Hollie Stephenson, she has a preternatural command of the stage, and belted out a remarkably potent “Sweet Dreams,” (with Ann Marie soaring on the famous solo section.) And he ended the show by bringing out back-up vocalist Lynn Mabry, who has performed with Talking Heads and other bands, to belt out an amazing “Here Comes The Rain Again,” with her partner in song Deborah Parson wailing on the harmonies and counter-melodies.

Another great night by Dave, who is a master at wedding the new and the timeless, and with a powerful band fueled by a brilliant horn section of Jimmy Z on sax and Lee Thornburg on trumpet, Ann Marie Calhoun on violin, guitar by Neil Swanson, Randy Cooke on drums, and the aforementioned and monumental Mike Bradford on bass, whose big smile, linked with the deep and joyful grooves, lit up the whole night.

Live Review: Tom Petty and the Heartbreakers’ Last Show at the Hollywood Bowl

On The River Tour, Bruce Springsteen Proves Himself To Be The Benjamin Button Of Rock

0
Bruce Springsteen has been in an uncharacteristically nostalgic mood in 2016.
Read more