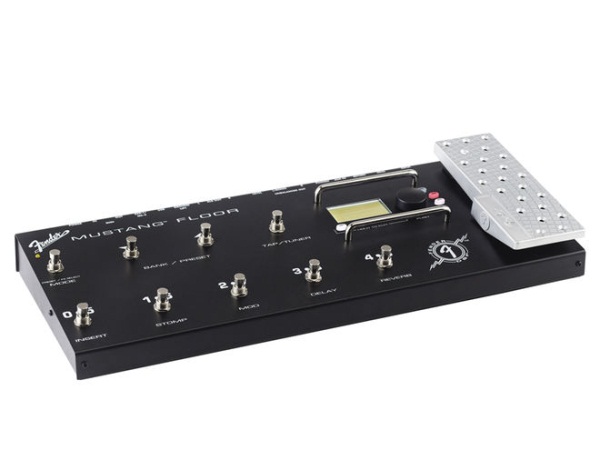 Amp modeling has opened the door of getting multiple amp sounds out of a single rig and Fender’s new Mustang Floor modeler/multi-effects unit packs it all into a roadworthy pedal board.  All that power is now at your feet.

The Mustang Floor fits the bill for the Top 40 or cover band guitarist looking to replicate the rig originally used to create the sounds found on the hit records. And with the ability to configure the outputs for running direct, through an amp, or both at the same time, it just might be the only piece of gear you need at a gig.

It should come as no surprise that half of the unit’s 14 amp models are of Fender original amps that showcase the company’s history:  Tweed Deluxe, Champ and Bassman; Early Blackface Princeton,  Deluxe Reverb and Twin Reverb; and their high gain Super-Sonic.  Vox is implied with a British ‘60s model and Marshall with a pair labeled British ‘70s and British ‘80s. There’s another pair of amps for those seeking higher gain sounds for those with metal leanings and a very cool “Studio Preamp” setting that focuses on the HiFi sounds of the guitar.

Upon close inspection, one sees that the folded metal enclosure with cast metal pedal has considerable heft. What looks like old school stompbox switches are actually momentary switches. The back panel hosts a good array of inputs and outputs that eliminates the need for special cables and adapters. These include: MIDI in/out, stereo XLR (with ground lift) and ¼” in/out, USB, insert loop send/return, aux in and headphone out. There is also a master level control which makes matching output extremely easy for whatever amp; soundboard or recorder the unit is being run into.

Editing or creating sounds is handled through an intelligently created, yet simple to use, control panel that is intuitive enough to use on the fly. Each of the multi-effect components (amp, stomp, mod, delay, reverb) has a backlit button. Pushing and holding that button allows you to edit that particular effect. A universal rotary control allows you to dial in (just as with a dedicated knob) the amount of whatever parameter is highlighted on the backlit LCD display.

Those parameters are shown as they typically would be found on an amp or an effect pedal. For example, when editing an amp setting, the display would show a representation of the gain, volume, bass, mid and treble control. Pushing on the universal control scrolls through those parameters, and then on to a second page of controls that gives access to non-typical elements that affects the sound of an amp, such as bias and sag, and different speaker combinations. Turning the universal control adjusts the highlighted parameter, so you can play as you twist the knob and listen just as you would with an amp or effect.

The Mustang Floor is also loaded with effects which are roughly divided into four categories: Tone shaping effects, sound modulation effects, echo and reverb. There is a built-in pedal that can also be programmed to work altering a parameter of one of the effects. The most obvious function would be operating as a traditional wah pedal. The pedal can be programmed to control a parameter of one of the unit’s effects maximizing the expression of what these effects have to offer. These parameters can also be controlled with an optional expression pedal, leaving the built-in unit to control the more conventional characteristics such as volume.

We ran the Mustang Floor into a pair of studio monitors to review the various amp models. Of course, without having each of the amps modeled to do a side-by-side comparison, the accuracy of the model is difficult to evaluate. However, scrolling through the models while chunking away on the guitar, with eyes closed, I could recognize the amps I’m familiar with that the unit was simulating.  Not only did each sound different, most “felt” different … and was certainly more than just changes is mid-range scoop or gain setting, but more along the lines of the essential character of the amps.

Editing the models was easy enough with the conventional parameters listed above shared throughout the model selections. It definitely would have been fun and more vibe-invigorating to have an option to switch between those conventional controls and those that are actually found on the amp. For example, a Fender tweed Deluxe only has a volume, tone and a microphone volume control for another set of inputs.  But the microphone control interacts with the others and changes the tone of the amp – part of the secret to Neil Young’s sound.  The Mustang Floor misses those nuances.

But then it’s nice to be able to do some of the things the Mustang Floor allows without having to crack the amp open (such as adjusting bias and sag to make the amp sound older/newer) or hearing different amp models with different speaker options.

The effects on the Mustang Floor are somewhat limited in selection. For example, there’s only one overdrive pedal or one wah pedal to choose from even though everyone knows different models from different manufacturers have different characteristics.  As one might expect the coolest effects are the ones Fender is known for: tremolo and reverb (there’s a stand alone reverb unit model, and the reverb for a ’65 Twin Reverb).  Especially hip is the inclusion of the Fender Vibrotone rotary speaker effect.

Most of the other effects don’t allude to being modeled after (or from) any particular pedal. Most of the models are fairly good sounding, but a couple, most notably the phase shifter, is fairly uninspiring.  Arguably, this is why there is an effects loop, so favorite pedals can still be used.

Some of the pre-programmed settings are somewhat jarring when surfing through the unit: high-gain extreme patches live right next door to ultra-clean ones, and if the guitar is run full volume there’s a potential for significant feedback. Of course, these programs are used to showcase the unit’s potential, of which there are plenty.  There are patches that are examples of the amp models without effects, which is a good starting place for tweaking one’s own personal pallet.

We also tested the Mustang Floor plugged into a Fender Twin Reverb since the unit seems to be designed for gigging live. There is a mode switch which allows the unit to operate each effect in a program individually with a footswitch just as you would if it were a standard pedalboard, so you can kick on an effect (pre-programmed) for a part of a song without having to change programs. That’s cool. Unfortunately, the amp model itself cannot be defeated in this mode. But this is just a minor shortcoming requiring an actual program change.

For the recording guitarist, the USB port direct into a D.A.W. puts a fairly impressive collection of amps at your fingertips and selecting different speaker models opens up a brave new world of tonal options… and those settings can instantly be recalled at a gig with a touch of your toes.