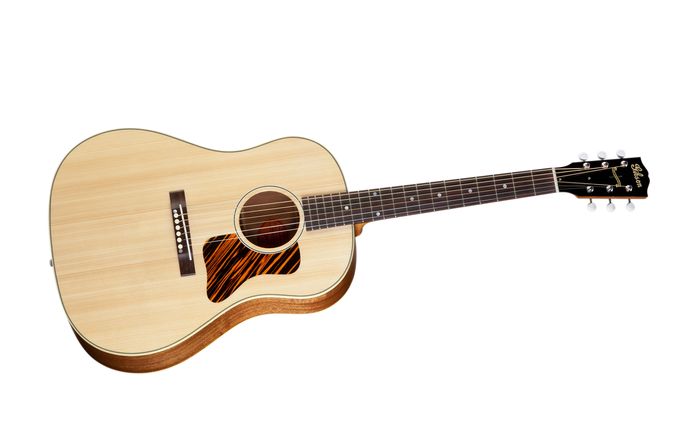 The Gibson J-35, so named for its $35 price tag, was originally introduced in the mid-1930s but was discontinued a few years later in favor of the J-45, which was only slightly different and carried the wartime “Only a Gibson Is Good Enough” slogan on the headstock. Now the J-35 is back, featuring that old headstock slogan and a retro pickguard design.

The 2013 J-35 round-shoulder dreadnought has a short-scale 19-fret neck with a Sitka spruce top. The back, sides and neck are all mahogany, and the tuners are nickel-plated white vintage button tuners. It has an attractive antique natural finish and comes with a standard black hardshell case with four gold latches and blue interior fabric. The electronics are the deservedly-lauded L.R. Baggs Element system, and the guitar has a Tusq nut and rosewood fingerboard and bridge. The most prominent feature is the ’40s-style firestripe pickguard, sort of a tiger-stripe thing that some players will find attractive or cool, while others will find gaudy and distracting. This writer happens to think it rocks.

The new J-35 we checked out had great balance, with a surprisingly deep and sustain-y bottom end that was just perfect on the lower strings when they were fretted, holding its own beautifully against open strings on the open chords. A little more bite on the treble wouldn’t have hurt anything, but it was all good.

If there’s any one thing missing on this guitar that’s hard to understand, it’s why Gibson – and all guitar manufacturers, for that matter – find it so difficult to routinely install a $2 strap button on the treble side of the neck heel, or somewhere on or around the neck heel, of their guitars. I’m convinced that one reason so many singer-songwriters play sitting down is because they don’t want to wrap a shoelace or a piece of twine around their headstocks to be able to use their straps. With a guitar this big especially, standing up is a great option to have. And it’s so much more rock and roll.

Maybe the nicest thing about this guitar is its relative affordability. With an MSRP of $2,190, it can be had for $1,699 from some sources. While that may not seem cheap, it’s almost a steal when compared to some arguably-overpriced guitars in the $5,000-$6,000 range. It sounds and plays great and the Baggs pickup is also a fine piece of equipment. Check one out, if for no other reason than to see the cool pickguard. 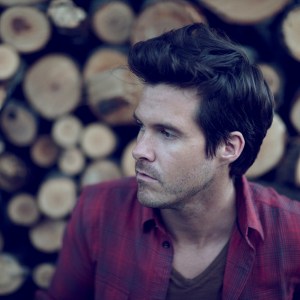