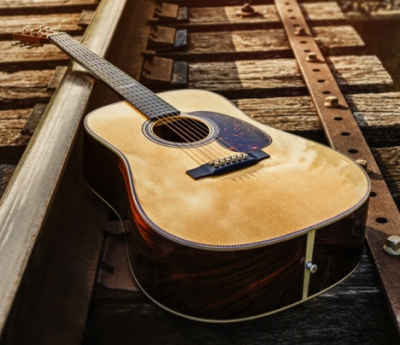 The HD Dierks Bentley is wonderfully lightweight for a dreadnought because of the combination of East Indian Rosewood back and sides and Adirondack spruce top. As is normally the case with Martin guitars, the one we tried out was wonderful, and didn’t even feel like a new guitar the way so many brand new ones do; it almost played and sounded like an old Martin in terms of aging. The action was great, nice and low at the bottom frets making runs easy, but elevated just the right amount in the upper register to offer a little more resistance. The guitar was well-balanced, but wasn’t especially rich or sophisticated in tone, which was fine, as this is a guitar that seems like it would be especially good for playing country and bluegrass, the two main styles of music that Bentley is all about.

The neck of the HD Dierks Bentley is made of select hardwoods and has an ebony fingerboard. It has an ebony bridge, a bone nut and a headplate of Madagascar rosewood. It also features a mother of pearl Phoenix bird fret marker inlayed at the 12th fret, a symbol of Bentley’s hometown of Phoenix, Arizona. The tuners are Waverly and the guitar comes with a locking Geib-style case with six latches, a true traveller’s case.

Cosmetically, the coolest thing about this guitar is something that audience members will probably never notice, but something that was apparently done at Bentley’s behest. The back purfling, top inlay and rosette of the guitar are a red, white and blue herringbone pattern, befitting a guitar that is made in America as Martins have been for generations.

The HD Dierks Bentley is a real player’s guitar, not an axe that will want to sit on a stand somewhere. It just has that feel, like it’s begging to get tuned up and played whether it’s on a stage or in a circle jerk. Martin has, once again, figured out how to make a guitar that really feels like something its namesake artist would use. Suggested retail for this guitar is $4,999 with a MAP of $3,999. Check one out; even if you can’t buy it, you won’t want to stop playing it.

NEXT: The Blake Shelton Signature Guitar 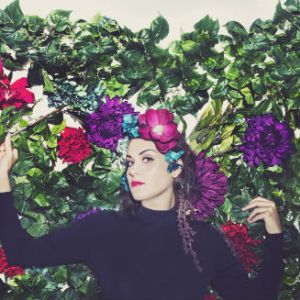 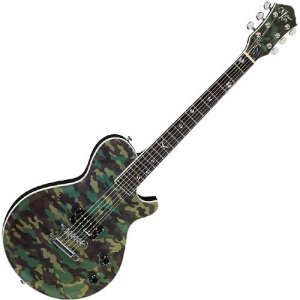