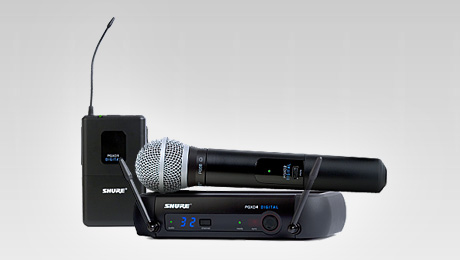 The digital revolution continues to provide dividends. In the case of the Shure PGXD Wireless microphone system, it’s a plugged in sound with the freedom to move about the stage.

There’s much to love about Shure’s digital wireless. First on the list is that the PGXD2 is available with a variety of the most popular Shure mic capsules, meaning some of the most popular vocal mics on earth, including the Beta 58a, SM86, PG58 and the SM58 as on our review model.

And second is how it functions. Conventional wireless transmits an audio signal over radio waves, just as standard commercial radio stations do. Digital wireless converts the signal into … well, a digital signal: basically, a string of 0’s and 1’s … and reassembles them back into an audio signal, the same way a CD does. Numbers transmit over the airwaves with no regard to the same limitations that audio waves do, most importantly with regard to bandwidth (20 – 20k Hz for the PGXD).

Since the receiver is “looking” for only the 0’s and 1’s, everything else is discarded: meaning only the digital signal is sent on for amplification.

The transmitter itself looks like a slightly elongated SM58 (those with the other capsule options resemble those mics), with a pair of AA batteries with expected 9-hour battery life inside the lower part of the microphone’s grip. Also hidden within that compartment is an infrared port which is used for setting up an exclusive channel for the system.

The single push/push switch on the mic is used for both powering on and off the transmitter (when held for two seconds), and muting/un-muting the mic. A single LED is green when the system is hot, amber when muted and red when the batteries are running low. There’s also a gain switch for either 0 db or -10 db, accessible by unscrewing the capsule for the base of the unit.

The front small receiver sports a pair of antennas, a synch button and IR port for set up, a “ready” LED showing when the system is receiving radio signal, another LED that indicates transmitted audio, a button for selecting channels and a LED numeric group/channel indicator. The back panel has the unit’s XLR and ¼” phone jacks which can be used simultaneously, and the power input jack.

The semi-automatic channel selection is easy enough, though care must be taken with multiple players using wireless systems.  All wireless systems must be on at the time of channel selection during set up as the unit searches for an unused frequency to operate in (perhaps this is why the receiver lacks a power switch).  This is usually not a problem in professional situations with pro soundmen … but can be in semi-pro ones, especially those with multiple band line ups. (These problems are not unique to the PGXD, and must be dealt with regardless of the manufacturer or type of wireless systems.)

After the system was set up, we blind tested the PGXD2 with the SM58 capsule against a hardwired SM58. The output from the receiver is identical to that of our SM58 and the audio of the transmitted signal was indistinguishable to that of the hardwired version. Certainly this was pulled off in part to the fact that there was no sign of RF interference or floor noise which can plague conventional wireless.

Our test unit functioned flawlessly with no issues during a recent performance. To test the unit’s reach during soundcheck, the transmitter was taken out of the building, through the parking lot and out on the street before there was an ever-so-slight drop of a syllable … and that slight drop was replaced with pure silence, and gratefully not white noise.

For ease of set up and audio familiarity the PGXD would be hard to beat. Push of a button automatically selects a frequency, a push of another pairs the unit, and then it just as using a SM58.

The system is also available with the PGXD1 transmitter for guitar and bass.