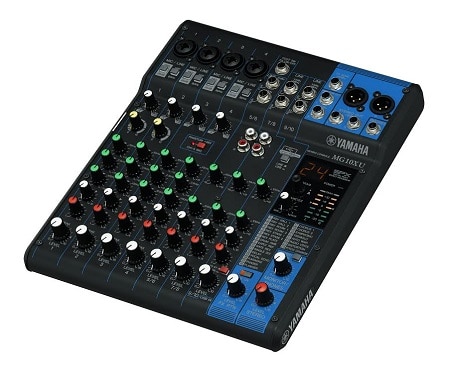 Compact mixing consoles are a perfect fit for singer-songwriters especially when they can do ‘double duty’ for recording and performing. Yamaha’s MG10XU, clearly inspired by Yamaha’s high-end touring consoles, can do just that. It’s an extremely versatile and affordable 10-channel mixer with effects that comes in a compact and roadworthy package.

There are some simple but outstanding features on the MG10XU. First is it’s clear markings. With input and output sections clearly marked and no ‘mystery’ buttons to guess at, this unit is great for the working musician who has to set up quickly and may need inputs for keyboards or iPODs, etc. Unlike other mixers of its size, the MG10XU has a serious power connector with rugged strain relief that screws into the mixer’s chassis to prevent breakage. Other stand-out features include compression on two channels and low and high EQ controls on line-level channels.

The input section of the MG10XU features four low impedance microphone or instrument channels each with XLR and 1/4-inch connectors and bass, mid and treble EQ. Channels 1 and 2 also offer compression and all four provide phantom power when necessary along with a 25db pad to properly match signal levels and a high-pass filter (80Hz) option to eliminate unwanted noise at the inputs. Engineers will like the MG10XU pad, gain and level control and per channel peak indicators as found on larger touring mixers. Moving down the line, channels 5/6, 7/8 and 9/10 are ideal for line level stereo pairs from keyboards, drum machines and  iPODs with both 1/4-inch and RCA jacks. Inputs at 9/10 can also be used with a USB 2.0 cable (not provided) and the USB jack at the back of the unit to connect to a computer for recording or playing back from DAW software. The digital connection supports the USB class 2 standard sampling rate of 192kHz and 24-bit depth, but you’ll probably want to visit Yamaha’s website to get details on interface settings with your computer and software.

The output section is easy to understand with both XLR connectors for powered speakers or power amps and 1/4-inch jacks for both stereo and monitor outputs. Of course, there is also a 1/4-inch headphone jack.

To tailor your sound, the MG10XU has 24 easily configurable built-in effects similar to those found in Yamaha’s SPX effects processors. Effects are convincing and range from typical (chorus, hall and room reverbs) to special (auto wah, pitch change). This mixer also has an effects send output for connecting external effects and a jack for connecting a foot pedal (not included) to conveniently switch effects on and off during performance.

Yamaha provides an optional accessory (BMS-10A) to mount this mixer on a microphone stand. While it’s a great idea and very solid once set up, the screws required to connect the mixer to the stand hardware are awkward to negotiate and could be easily lost. For that reason, this stand accessory is best used where the mixer is set up permanently and is not very useful for portable performance situations without some sort of ‘quick disconnect’ hardware at the microphone stand.

All in all, the MG10XU is a great choice for an affordable mixer with great features well-suited to the singer-songwriter for both live performance and recording. It also has great connectivity options including a USB port to support recording projects with computer-based recording software. 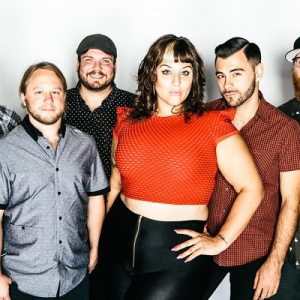 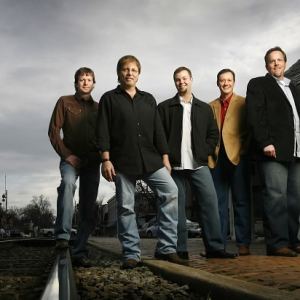