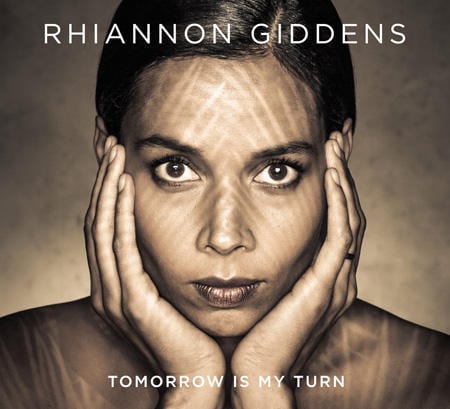 Rhiannon Giddens: Tomorrow is My Turn Anyone familiar with the predominantly rustic, down home approach of Rhiannon Giddens’ full time outfit, the Carolina Chocolate Drops, won’t be surprised that she stays true to her influences on her first solo venture. Recent associations with T Bone Burnett included her vocals on Lost on the River, the collection of new music added to Bob Dylan’s leftover lyrics from his basement tapes era. Burnett then assembled many of his go-to team of musicians to back Giddens on this vibrant set of traditional and classic country, jazz, gospel and blues covers, all written, or made famous, by women.

With Burnett involved, there’s no question that this is authentic. But it’s to Giddens’ credit that her interpretations aren’t stuffy, and in some cases not all that retro. Musically, the wide ranging material includes a prison work song (“Waterboy,” made popular by Odetta), country classics (the Patsy Cline arrangement of Hank Cochran’s “She’s Got You”), church music (Sister Rosetta Tharpe’s “Up Above my Head”) and traditionals such as “Black is the Color.” Those concerned that this is a stale history lesson can relax; Giddens even rearranges the latter tune to include funky percussion that meshes subtly with the earthier harmonica and tambourine accompaniment.

But it’s Giddens’ golden, soulful voice that is the real attraction. She treats these songs respectfully but not overly so, allowing her own style to emerge in the process. No matter how often you’ve heard the oft recorded folksong “Shake Sugaree,” Giddens’ brings a mellow sweetness to this acoustic version that makes hers one of the songs’ best interpretations to date. The album was initially inspired by the singer watching a video of Nina Simone performing the title track, a French tune with lyrics that detail overcoming strife in life. Ultimately, most of this material concerns variations of that concept, including the bittersweet closing “Angel City,” the disc’s only original composition.

The combination of Burnett’s characteristically genuine, acoustic based production, Giddens’ sumptuous voice and a conceptual set list that never feels musty, yields a wonderful album whose restrained pleasures reveal themselves gradually over repeated playings. While she may not be ready to leave the Chocolate Drops just yet, Giddens’ shows she can parlay her talents into a viable career whenever she’s ready.