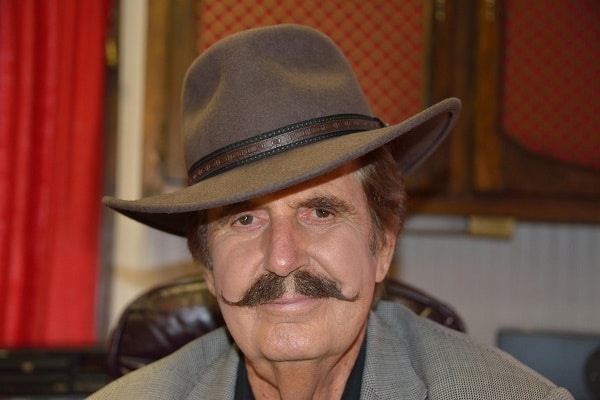 Hall passed away at his home in Muscle Shoals, not far from his studio. He had battled prostate cancer in recent months, his wife, Linda Kay Hall, said.

Hall, who was born in Mississippi to sharecropper parents but grew up in northwest Alabama, produced such iconic R&B acts as Wilson Pickett, Aretha Franklin, Otis Redding, Arthur Alexander and Etta James, among myriad others.

He is one of the cornerstones of American popular music, and what he managed to accomplish in a small Alabama town ranks as one of the more improbable scenarios in pop music history. He had the reputation for being a draconian taskmaster, an irascible sort who often pushed his musicians to the brink. But, as Keith Richards once noted, it takes someone with that kind of drive to achieve such monumental results.

“My theory has always been if you work eight hours a day and I work 16, and we’ve got the same mental capacity, then I’m going to eat your lunch in a year’s time,” Hall told American Songwriter in 2015.

Hall was the primary subject of the 2013 documentary Muscle Shoals, which chronicled how the Shoals region became a hotbed for soul music and rock and roll in the ‘60s and ‘70s. The film reignited interest in the region’s musical history.

A country music enthusiast who played country-style fiddle in his youth, Hall got his start as a songwriter in the late ‘50s. He had songs recorded by George Jones, Brenda Lee and Roy Orbison.

Hall’s first successful cut as a producer was Arthur Alexander’s “You Better Move On,” recorded in 1961 at the bare-bones studio Hall had opened with friend and colleague Billy Sherrill. After splitting with Sherrill and another business partner, Tom Stafford, Hall used the money he made from the Alexander song to build FAME Studios on Avalon Avenue in Muscle Shoals.

“I made a little money, so I built a recording studio and decided that maybe my nature [leans toward] black music,” he said.

All of the artists Hall produced early in his career were black. These sessions occurred when race relations were at a fever pitch, not just in the South, but across the United States. In Alabama, Governor George Wallace was stoking racial fears with his staunch segregationist platform, culminating with his “Stand In The Schoolhouse Door” at the University of Alabama in 1963.

Hall said his studio was a safe haven where blacks and whites could make music together at an especially tense time.

In 1966, Hall helped license Percy Sledge’s “When A Man Loves A Woman,” which had been recorded in Norala Studios in nearby Sheffield, Alabama, to Atlantic Records. This led to a partnership between Atlantic and FAME Studios, whereby Hall would go on to produce a bevy of Atlantic artists in Muscle Shoals. But the partnership was terminated after Hall got into a fistfight with Aretha Franklin’s husband in 1967.

Hall is often associated with the Swampers, one of several house bands the producer used at FAME Studios in the ’60s. The group, which was famously name-checked in Lynyrd Skynyrd’s “Sweet Home Alabama,” would eventually splinter from Hall and go on to open Muscle Shoals Sound Studios in Sheffield, in partnership with Jerry Wexler of Atlantic Records. The split was acrimonious, though the two parties would reconcile in later years.

“They’re dear friends of mine and those days are long gone,” Hall said of the Swampers in 2015. “We made up and I even recorded an album at their recording studio with Candi Staton several years ago. I did that as a gesture to let them know that I love them, and they love me, so we’ve buried the hatchet and moved on with our lives.”

John Paul White, a singer-songwriter from Muscle Shoals and co-owner of Single Lock Records in nearby Florence, Alabama, paid tribute to Hall via Twitter after his passing. “I can’t possibly tell you how this affects me,” White wrote. “This is the architect of the sound that made me the artist and writer I am today. He took me under his wing and treated me like an equal, when I knew damn well I was not.”

“If it wasn’t for you, so many of us wouldn’t have gotten our start in the music industry,” Dylan LeBlanc, who was born in Louisiana but grew up in Muscle Shoals, wrote on Instagram. “Thank you for hiring my father and paying him to write songs so we could keep food on the table. You’re a legend forever. We are all grateful to you.”

Jason Isbell, also a native of the Shoals region, weighed in as well. “Rick Hall and his family gave me my first job in the music business, and nobody in the industry ever worked harder than Rick. Nobody. American music wouldn’t be the same without his contributions. His death is a huge loss to those of us who knew him and those who didn’t.”

When asked about the secret of his success, Hall said it wasn’t because he was a “genius,” as some claimed.

“I had a tremendous work ethic and I had a God-given music talent,” he said. “I knew hit records when I heard them and I knew hit songs when I heard them. So I took advantage of that and I had a lot of success. I’ve had so much success that I can’t even believe it myself, and that these things happened to me. When I was producing records, I always felt mine were terribly inferior to New York’s, Los Angeles,’ or London, England’s, or Nashville, Tennessee’s records. I just thought my records didn’t come up to par, but consequently they did.”

A television series about Hall and FAME Studios is currently in development, his publicist said.

In 2014, Hall was awarded the lifetime achievement award at the Grammys. He is survived by his wife Linda, sons Rick Jr., Mark and Rodney, as well as his five grandchildren, Rebecca, Mary Elizabeth, Jackson, Sara and Sam.

This article has been expanded from its original version.