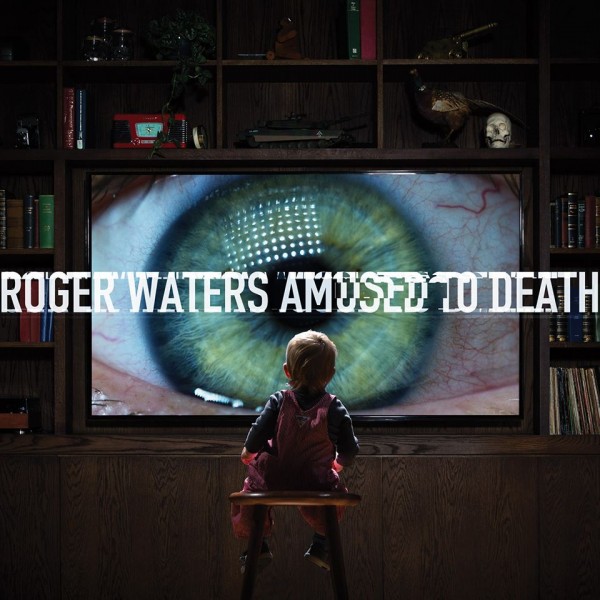 “Go big or go home” seems to be the motto by which Roger Waters lives. From his lofty concept albums both with and after Pink Floyd to the recent mammoth world tour of The Wall that expanded the vistas of combining music and visuals with jaw dropping results, the auteur has plenty of grandiose ideas and, perhaps most importantly, the financial wherewithal to realize them.

The resounding success of The Wall production put Waters–who hadn’t released a solo studio set since 1993–back on the musical map. Whether it was because his once inexhaustible creative well had run dry, or he just needed to recharge his inspirational batteries, Waters’ three album post-Floyd solo run stopped with the commercially disappointing, if artistically challenging Amused to Death. Now, twenty three years later, he revisits and updates it; remixing and remastering the songs, changing the cover art/packaging and even tinkering slightly with the tunes to make them stronger.

By any measure, this is an engaging, complex, lyrically confrontational and intellectually intense 80 minutes. It revisits many of Waters’ themes throughout the years, specifically the futility of war, mental stunting caused by a commercially corrupt society, the adverse power of religion and vacuous entertainment, all of which have impeded and continue to impede society’s progress. To that end he employs what feels like a cast of thousands that includes such disparate names as Jeff Beck, the London Welsh Chorale, the National Philharmonic Orchestra Limited, Don Henley and most unusually, Marv Albert (still “the voice of the NBA”) on this multifaceted near overwhelmingly audacious work.

Clearly this is not, and was never meant to be, easy listening. Waters encourages us to consume it at once, and unlike some of his previous conceptually dense projects, little of this works when removed from the entirety. In other words, there are no hit single contenders, or even accessible tracks that work outside of the whole.

Rather this is a widescreen movie for the ears, complete with found voices, dynamic sound effects, heavy sung/spoken lyrics (also included in the slick booklet) and music that incorporates everything from soulful female singers to African percussion and Gregorian chants. Titles such as “What God Wants (Pts. l-lll),” “Too Much Rope” and the Ronald Reagan diatribe “The Bravery of Being Out of Range” set the stage for this provocative piece that even with its affectations, manages to generally keep the balance righted between arty and pretentious.

Most impressively, the disc hasn’t aged lyrically, conceptually or sonically since its release over two decades ago. A newly mixed Blu-ray version further expands the sound to 5.1 surround and is the preferred way to appreciate this under-heard entry into Waters’ always demanding, usually rewarding catalog. It’s obviously not for everyone, but those new to, or already on, the Waters train who might have missed this the first time around, can experience it in all its sprawling glory.