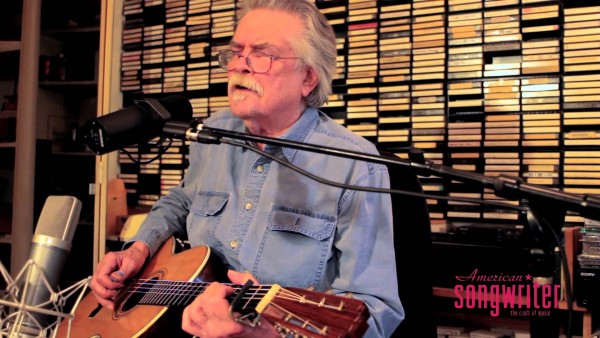 Guy Clark, the iconic songwriter who turns 70 this November, recently invited American Songwriter into his lair, where he discussed Hemingway and the natural high that comes with making art.

Writing songs is so cerebral, staring out the window for two days. But building guitars is real hand-eye stuff, so it’s right-brain versus left-brain, and they feed off one another and give each other a chance to rest. This workshop is exactly the way I dreamed it should be, except bigger. I can’t think of anything I would rather have set up than a guitar shop and a table to write at in the same room.

The Master and The Student:

I’ve co-written a lot in the last several years. Mainly I just got stuck. I ran out of shit to say. I’ve found that with co-writing, there are a lot of young phenomenal songwriters and guitar players that come over here and write. And I learn so much from these guys. I’ll go, “Wow, how did you think of that? Or, let me learn it.”

I’m inspired by anything I hear or read on some level. If I’m not then I put it down. I’m always inspired by the quality of Townes [Van Zandt]’s work. I’m inspired by Dylan Thomas. I’ve been listening to a bunch of old blues singers – I  haven’t listened to that stuff in so long. It kind of makes me want to play the blues again. I’m inspired by friends of mine who write really good stuff: Rodney Crowell, Verlon Thompson, Shawn Camp, Jedd Hughes.

When I wrote that I had just read The Complete Short Stories. It was a big, thick book and I really enjoyed it. He’s a really sparse, good writer. One guy I had not met [Joe Leathers] and another friend of mine Ray Stephenson came over here to write with me one day. Joehad told Ray the line “Hemingway’s Whiskey,” and Ray said, ‘We gotta take that over to Guy’s house.’ So they did. We just constructed it and put it together. It was pretty obvious what it had to be about … I liked doing it and I think it’s a pretty good piece of work.

Most of the really good songs are dead true. You couldn’t make up “Desperados Waiting For A Train,” or any of that stuff. It had to have happened to have the song be there. Every time I’ve tried to make stuff up it just kind of falls flat. So the majority of my work is something that happened to me, I saw happen to someone else, or a friend of mine told me happened. There is a certain amount of theatrical and poetic license. People are supposed to like it, that’s why you’re doing it. It’s supposed to be fun. It’s not brain surgery, it’s heart surgery. They’re just songs.

I’m not inspired by the same things that I was inspired by 30 years ago. Some of those songs are still good songs but I wouldn’t write them today. Certainly I hope I’ve gotten better. It gets harder to come up with good work because I have a yardstick that’s pretty serious. You just do the best you can.

It’s what I decided to do 30 years ago. I’ve stuck it out through whatever. I’ve gone a year and not written a song just because I couldn’t think of anything. But I always come back to it because there’s always that little buzz you get when you do something well and sing it out loud to the public. And people clap and tell you how great you are. What a deal. You never get through. You never get to be the best there is because there is no “best there is.” It’s just there to be done. It’s the creative process, whether it’s building guitars or writing songs.

0
“For me, I think the hardest part was transposing parts from guitar to synth.”
Read more