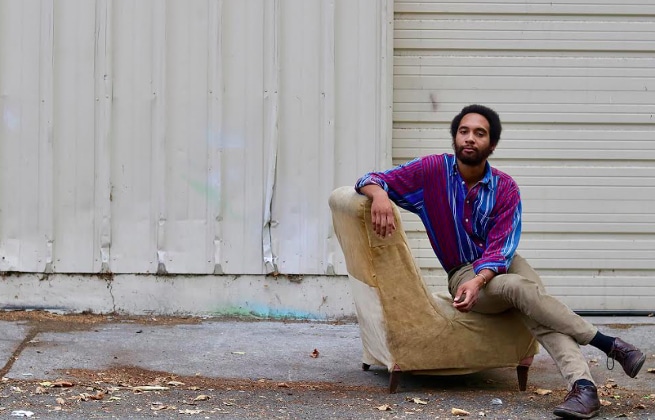 Daily Discovery: Tre Burt, “Caught it From the Rye”

Tre Burt may have made one of his greatest memories by sneaking into a Bob Dylan concert — someone he certainly resembles in sound, but the soon-to-be-mainstream talent is setting the scene to be blowing people away at festival shows of his own.

Originally from the Bay Area but now living in Sacramento, he is on the verge of releasing his first record with Oh Boy!, and is premiering the track “Caught it From the Rye” today.

It is one that he says he doesn’t really remember how it came about — though like a good storyteller, he remembers how he felt.

“The songs of mine I find most interesting to play are the ones I can’t remember writing. CIFTR is one of those songs,” he said. “I remember where I was though, and the conditions of that particular time. I was living out of a broken down car during a warm summer in Portland. I spent a lot of time hanging out in the forest brushes in Washington Park with my guitar. I had just found a fresh box of cigarettes someone must’ve dropped and was feeling pretty lucky all things considered.

“I sat down at the base of a tree and when I looked up I saw an unmistakable shape of a butterfly made by a break in the leaves and branches against the blue of the sky. The sun shot down on my lap. When I looked back down at my notebook I wrote the first line, “The sky then opened up and from it came a light”. After that, all I remember is rocking back and forth in the dirt in a state of hypnosis.”

With an honest ambition to write 50 albums, front the Hardly Strictly Bluegrass Fest, and buy some land, Burt flexes his old soul with a mix of optimism and grounding that makes you feel what he has felt.

Currently he is touring with Haley Heynderickx and preparing for his own on January 31 of the coming year.

But about that Dylan experience, he remembers that. Vividly.

“I was living in my car in Portland, 2014 reading the paper looking for live music and saw Dylan was playing in 20 minutes not too far away from where I was parked at the Keller Auditorium,” he said. “The show was sold out and I couldn’t afford a ticket anyway. I went to the side exit and stood in the shadows across the street for an hour waiting for the security guard to take a piss and walked in behind someone coming out. I got in and walked straight to the front.

“It was just one of those moments. As if the seas parted and this force pushing me forward. I got to the front maybe 7 or 8 feet away from the guy and I remember being shocked that it was so easy. All wide-eyed from it being my first time seeing him in person and we just kinda stared at each other for a few moments while he’s playing harmonica. I think he was just kinda surprised to see this scrappy looking black kid in an ocean of old, white deadheads. I thought, “Wait a second” and turned around to try and find another black person to no avail. It was all pretty hilarious.”