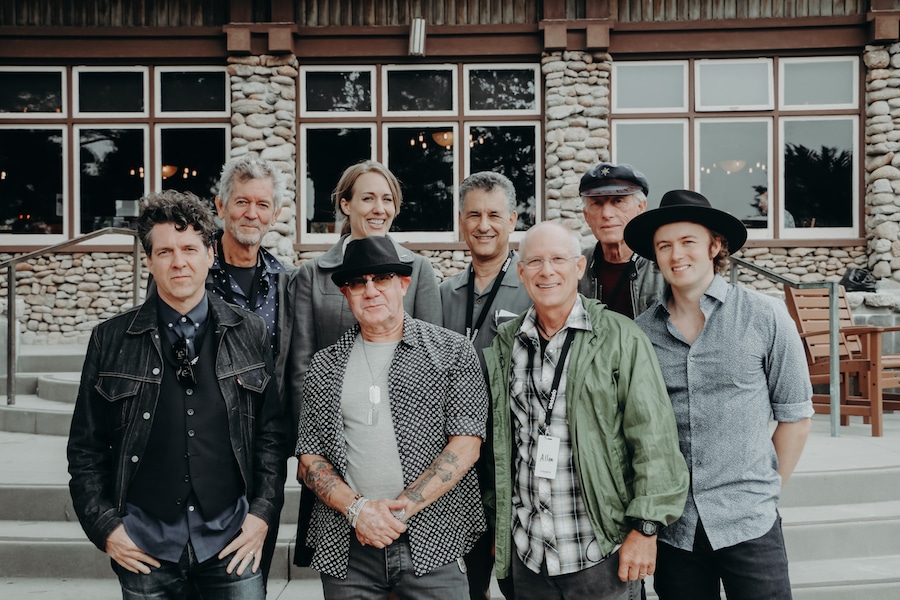 When he first started writing songs, Rodney Crowell said he’d rarely get the whole thing. “Maybe I’d get 40 percent,” he said, “and think I was done. Later on, I learned you keep working till you get the whole song.” So when it came time to plan a song camp, knowing people would expect one with fullness of vision, he created Adventures in Song, a four-day songwriting camp on the Monterey peninsula of California.

Soon he made his vision public. It sounded like a dream, related by Crowell with his usual lyrical flair: “Expect our songwriting camp to be equal parts zip-lining through the trees and archaeological dig.” And if that wasn’t enough enticement, then came the list of invited luminaries, and it was pretty evident this song adventure was getting real: Bernie Taupin, Joe Henry, Allen Shamblin, Lisa Loeb, and Brennen Leigh. Add to that guitar legend Don Peake, and Daniel Levitin, neuroscientist, songwriter and author of This Is Your Brain On Music.

“It was hard to resist,” said Vincent Vaughan, an attendee who came all the way from Dublin. Unsure if it was the right thing to do, Vaughan’s wife quashed any doubts. “If you don’t go, you’ll regret it your whole life,” she said. Ninety-five songwriters came from all corners of America, as well as the U.K., Ireland, Germany, New Zealand and Australia.


Crowell’s vision was to hold his camp in a setting as sacred, organic and beautiful as a perfect song. He thought of one location only: the historic pine-clad Asilomar center, an oasis of woodland and craftsmen lodges designed by San Simeon-architect Julia Morgan, a stone’s throw from the Pacific. This ancient cathedral of pines, where everyone from religious societies to groups of scientists have gathered, became a church of song over four days in July, as Rodney and his team affirmed the truth that songs mattered. Before songwriters can worry about writing a hit song, they explained, one must first learn to write a great song. Real reverence for great songs, and the dedication to the art and craft of songwriting, was the single thread that connected each of the teachers, and each lesson taught.

That Crowell has always aspired to the higher songwriting angels is well known, and the reason he’s truly a songwriter’s songwriter, what with so many legends (Johnny Cash, Waylon Jennings, Willie Nelson, Guy Clark and more) having recorded his songs. That celebration of the timelessness of great songs was imparted powerfully in master-classes such as “Song As Prayer,” in which he emphasized the holiness of songs by sharing the lyrics of two songs projected on a big movie screen, “Heal Me” by Leonard Cohen and “Every Grain Of Sand” by Bob Dylan.  Tenderly tracing the simplicity and hymnal grace of both songs he delivered the main message: To aim not at the charts, but far beyond, and find the “singular song” inside you.

To get there, he explained, takes years of dedication. “In this day and age,” Crowell said, “if you’re going to have any longevity, you’d better develop some artistry.  Hits are disposable.”

Allan Shamblin, co-writer of Miranda Lambert’s “The House That Built Me” and Bonnie Raitt’s “I Can’t Make You Love Me,” said, “If you aim too closely for that target, you won’t hit it. You got to aim higher. A lot of hit songs today are like logs. They are meant to be thrown on the fire. And they will burn up bright. But then there’s nothing left. But what we want are songs which won’t burn.”


To bring home that message Crowell invited Bernie Taupin, the lyricist of countless hit songs written with Elton John. Taupin stressed that it wasn’t until the two stopped trying to write imitations of conventional pop songs and embraced their own singularity that they had real success.

“What I wanted to do was write story songs,” he said. “I was living a lie by writing what was then currently in vogue. And all our first songs were quite naive, pie in the sky, and not very interesting. We were pushed by our publisher to write conventional songs. And it felt wrong. We knew this was not why we were put on this earth.”

That all changed when he discovered Music From Big Pink by The Band, which he said was “like being released from prison. That music was so timeless, and also had this mysterious quality. That music totally transformed my songwriting. I realized I could tell stories, and become an American storyteller. I could tell stories just like Lefty Frizzell. And the album we wrote after that reflects this, Tumbleweed Connection.”

And just as Bernie was influenced by The Band to help create a new musical hybrid with Elton, so was Crowell absolutely stunned, back home in Crosby, Texas, by the expansive, holy elegance of  Tumbleweed Connection. Crowell, in turn, inspired Shamblin, a young songwriter growing up in the next town over. Crowell was proof to Shamblin that it could be done.

“This was a songwriter who grew up close to me and had kicked a dent in the business and was making headway,” Shamblin said. “And we swam in the same lake. We went to the same beer joint. I knew if he did it, maybe there’s hope for me.”

More than anything, the attendees said they wanted their songs to be heard. But Crowell treated everyone like pros, and offered no sugarcoated praise, focusing instead on aspects he felt could be strengthened. Still, he didn’t want to be brutal.

“It’s a delicate thing,” Crowell said. “To focus in on 95 songs. And trust yourself to give some constructive feedback, which sometimes includes dismantling some things. For the most part, they took it pretty well. But that’s how I learned.”


It was his focus on the use of “hard” rhymes that was repeated often, but not as a rule as much as an aspiration that elevates the process. “The fact that you have to struggle for that hard rhyme can bring something unexpected that’s right to the song.”

Shamblin’s approach was to honor each songwriter as an equal. “I am not coming down from the mountaintop with commandments,” he said. “I’m coming up from the deepest part of the valley, all beat up, scarred up, and telling you what I saw.”


Joe Henry worried his ideas about songwriting wouldn’t translate. “I feared that what I had to offer might prove overly abstract and inconsequential, ultimately, to those whose relationship to the discipline is driven by a desire for self-expression over discovery, and less tempered by mystical engagement.”


“But I ultimately found it extremely rewarding,” Henry said. “I was genuinely humbled and inspired by how courageously the attendees made themselves vulnerable to me and to each other toward a shared goal of pushing their game forward, and how generously they listened and offered perspective to their fellow students. I was never the only teacher in the room.”

Though Crowell was often bluntly critical in his responses to songs, when he genuinely liked one, the impact was profound. Few songs earned this distinction, but one which did was by Mark Montijo’s beautiful “History.” When Montijo finished performing it there was a moment of stunned silence and then a great ovation. All eyes were on Crowell, awaiting his verdict. At first, he said  nothing at all, with no expression. But slowly a smile of admiration came to his eyes. He offered no critique. Instead, smiling, he reached out to shake Montijo’s hand, and said one word only: “Congratulations.”

Everyone applauded. It was the best critique anyone could get.

For J.P. Goldman,  a 24-year old bassist and Berklee College of Music graduate who lives in Boston, one highlight stood out more than the others: jamming, and then performing live, with a legend. When Don Peake saw him carrying his bass, he invited Goldman to jam with him on “The Stumble,” by Freddie King. And he was happy he did. “Immediately, by golly, I could tell he was good,” Peake said. “Great tone, groove.  So I said, ‘Let’s do it.’”

On the final night of camp, after a powerful set by Crowell, Peake took over. “I’d like to bring up my friend J.P.,” he said, surprising one and all when our unassuming friend, bass slung around his neck, stepped up to play with a legend as if he did it every night.

Peake launched into “The Stumble,” as Goldman easily laid down a walking bass line, which was solidly soulful even without drums. With a gentle smile, he looked like he’d been playing in the major leagues his whole life.

Later, Goldman said it was a great moment for him. “That was a moment I will always have. That he trusted I could do that meant so much to me. Rodney put together a group of prolific artists with different perspectives on the craft. It really reinforced the ideal for me that there’s more than one way to write a song and you should find your own way of doing it. Also, Lisa Loeb’s method of using free writing has been great; already I’ve unearthed so many new feelings and memories.”


Australian TV-movie costumer Mark Lucas singled out Joe Henry, as did many, for his enlightened understanding of various aspects of contemporary music, as well as the eloquence with which he delivered this wisdom. “[Joe] really elevated the whole thing with his great intellect and humor, as well as real respect.”

When working with a small group, Henry would honor all assembled with the gentle grace of his kind, poetic heart. Rather than dictate his suggested revisions, he gently suggested a consideration of some “architectural shoring up.” Crystallizing the necessity of writing from a place of personal truth, he explained, “That is where the authority is.”

After playing an elegiac song to Woody Guthrie, one songwriter asked Henry if he had any production ideas. One of the best producers around, he’s beloved for always honoring the song itself, before building the perfect frame. It’s the reason why he’s invited to produce so many legends, including Crowell.  He knows not only what’s best, but also how to communicate that vision clearly.

“You sing it so intimately,” he said, “that it has power.  Keep that. So no drums. Mandolin can set the rhythm. Keep it conversational. Certain elements, used sparsely, can make the sonic picture more conversational. You want space. Space is your friend. ”

On the final day, Crowell explained that being a songwriter is never easy, and that he hoped his critiques didn’t disappoint anyone. “As a songwriter, everything that happens helps you. If you learn from it. For every success you ever get, there are way more failures. If you learn from those failures and rise up unbroken, you’ll make it. So I hope you all learn to fail better.”

Shamblin echoed this sentiment, and reminded everyone that regardless of all the failures, as long as you enjoy the process, you’ll be a winner.

Look for more stories about the camp this week on americansongwriter.com.