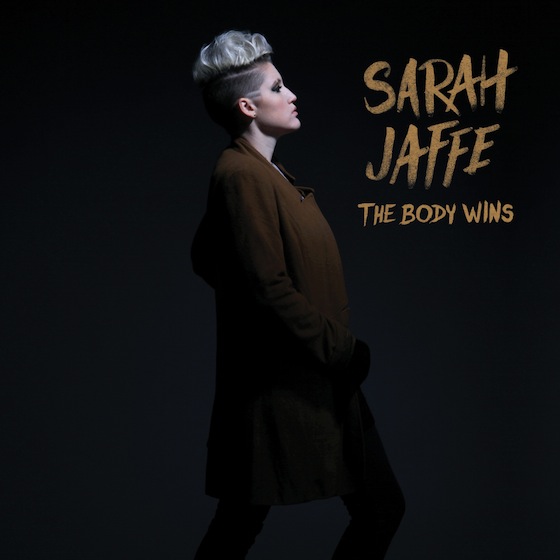 The 20-something Texan Sarah Jaffe could have played it safe on her sophomore album, and remained a singer-songwriter strumming her tunes on a guitar. Jaffe isn’t a typical Lone Star State troubadour. She comes from Denton, which also home to such genre-shifting bands as Midlake and Centro-matic, and Jaffe similarly reveals adventurous musical ambitions on The Body Wins.

While her debut Suburban Nature started off with one of those strummed guitars, Jaffe opens her sophomore disc with a short song, titled “Paul,” that finds her at the piano and surrounded by strings. The next tune, the title track, reveals the influence of the bass and drum that Jaffe picked up at a pawnshop before making this album. Here again she uses strings along with horns and a strong drumbeat to create an intriguing avant dance-pop hybrid. She pushes the musical envelope further on the third tune, the exuberant “Glorified High,” which boasts a New Wave-like hookiness powered by a distorted guitar line.

With her Suburban Nature producer John Congleton (St. Vincent, The Walkmen), Jaffe has designed a beguiling organic/synthetic musical blend. Her music utilizes a lot of synths and studio sounds that complement and contrast with the horns, strings and Jaffe’s own emotive vocals. “A Sucker For Your Marketing” was the first song that she wrote for The Body Wins and she plays the bass on the album track. The song, which is more about relationships than marketing, serves up a potent rhythm track that plays off some jagged guitars, swelling strings and Jaffe’s dramatic singing, which results in a sound that suggests Tori Amos fronting Gang of Four.

Jaffe’s musical experimentation results in a continually absorbing effort that yields some wonderful songs. On “Halfway Right,” Jaffe achieves a soulful vibe that recalls Adele, only with a more modernistic musical approach. “Talk” stands out as another catchy track, which emphasizes the synthesizers and programmed drums but packs a lot of dance floor-ready energy into under 3 minutes.

While the song title “Hooray For Love” suggests another celebratory piece, it is actually a darker rumination on love (“He says torture me and I’ll torture you” goes one line) set against an overcast arrangement punctuated with lightning strikes of strings and Jaffe’s emotion-filled vocals. She follows that melodramatic outing, however, with the low-key, and lovely, “Foggy Field,” a simple, little tune in which she sings along with a delicate string quintet.

“Foggy Field” mentions being in a “dreamlike state,” and her lyrics often have a dream-inspired quality to them. There’s almost a mantra-ish lullaby feel when she sings “Where you gonna rest your head/Where you gonna rest those long legs” on “When You Rest.” However, sometimes her lyrics seem to come more from a fever dream as when she sings “Found a cold spot in the water in the summer, which was slaughter” at the start of “Halfway Right.” Jaffe’s lyrics are more impressionistic and ethereal than your stereotypical earthy Texas troubadour, and occasionally they become a bit too elusive for the listener to grasp (“On the seventh day, we set aside our brains – from an amateur hell” she sings in “Paul”).

Among the players assisting Jaffe to achieve this richly textured sound are Midlake drummer McKenzie Smith and Centro-matic keyboardist Scott Danbom as well as fellow Denton-ite, guitarist Robert Gomez. To help with the string arrangements, Jaffe enlisted the services of her friend, Fiona Brice, whose extensive credits include Placebo and Kanye West.

Jaffe takes an admirable artistic leap with this disc and she seems to be fast developing into an artist with an expansive musical vision. It will be curious to see where she goes from here. The Body Wins stands as something of a transitional work for Jaffe, but it’s an impressive album for wherever her musical journey takes her.