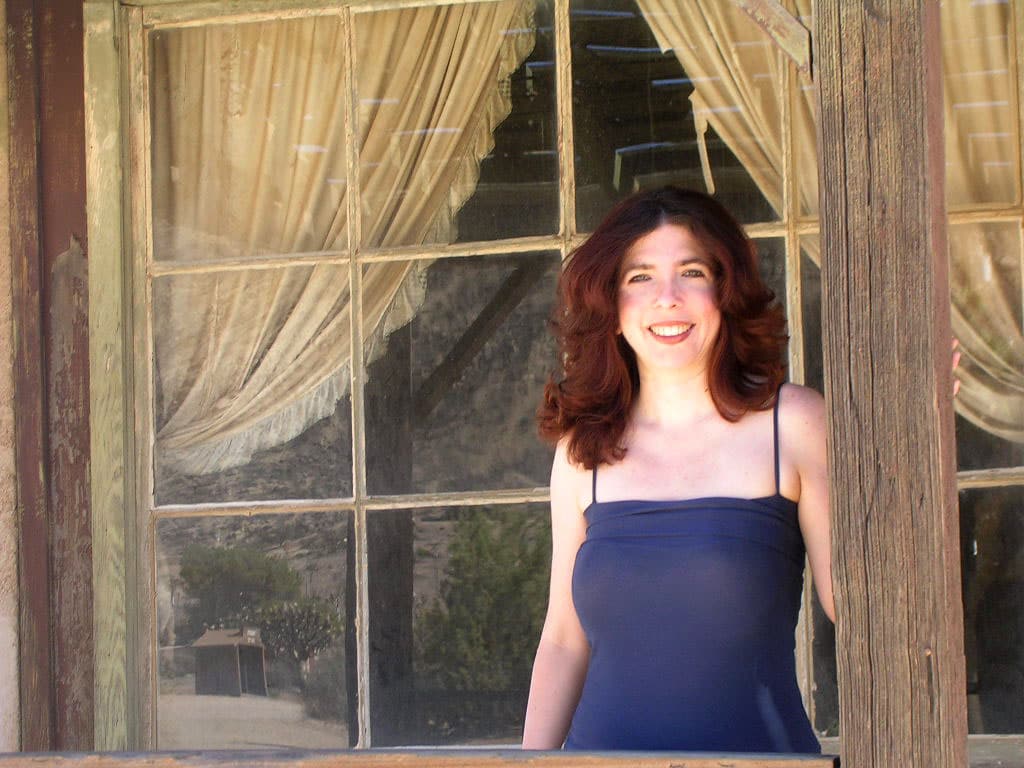 How did the song “If I Were A Bottle” come about? (Read her winning lyrics here.)

I was seeing someone who, let’s just say, enjoyed his alcohol. He was not a mean guy—quite sweet—but it was a frustrating time. I think whenever you’re involved with someone like that, you can’t help feeling sometimes that the person is more enchanted with the bottle and what it contains than with you. The concept of putting myself in the bottle’s place was quite spur of the moment. I didn’t sit down and decide “I want to write a song about this.” The first line just randomly popped into my head one day, and I decided to go further with it. Originally I thought it was headed in the direction of a funny song. That’s not at all where it ended up.

Yes I have. Again, a song I thought would be more humorous and jaunty actually coalesced into a bittersweet folk song with a very spare arrangement—just my vocals, acoustic guitar and Dobro.

I’ll never forget timidly sharing that first song in 2006 with my then-guitar teacher Howard Yearwood. He said,  “Good, write another.” I’m thankful he kept things positive and didn’t tear apart that initial attempt. I’m not sure I would have kept on writing–mentors like that are crucial. I know some writers who follow a strict regimen—every day they carve out time to write. I am not particularly methodical about it. Sometimes it’s scrawled lyrics on a post-it, a napkin, envelope, only to be revisited a year later when I come across them again. But usually, I either have a concept or theme in mind and sit down with the guitar and start fleshing out the lyrics and music at the same time. But sometimes I just strum chords and an idea sprouts, seemingly out of nowhere. Often I find the simplest songs, the ones I don’t overthink, are the songs people respond to the most.

Yes. The real fun can be in the accidental collaborations. Bob Gothar, who plays on “If I Were a Bottle,” was noodling around on the guitar one day. I ran in and asked, “What’s that you’re playing?” He said it wasn’t anything really. To him it was guitar gibberish. I heard it differently. So I recorded him right away and later created lyrics for it. It’s also an interesting experiment to take half a song and write the lyrics and give the other half to someone else who may tend to write in a different style. It works sometimes.

Probably “Would you feel mellow and kind, or would you hold on so tight, afraid love would unwind?”  I like when writers use uncommon combinations of words. It’s not typical to describe love as unwinding, so I was happy when I came up with that. I have no idea where it came from—just a rhyme for “kind” I guess.

Who are some of your favorite songwriters, and why?.

Paul Simon and Rodney Crowell. There’s an elegance and eloquence in their storytelling, and Crowell has the rare ability to write a stunning ballad that never veers toward sappiness. Lucinda Williams is all about economy in writing—she captures so much heartache with so few words. Simple imagery but powerful. Mark Knopfler in his solo career has been the opposite. Very wordy but wonderful. A guy who loves history and can take subject matter like the Mason-Dixon line or Napoleon and fashion these engaging songs full of the most vivid detail.

To keep meeting other songwriters.  To keep recording. To perform my songs publicly more and more. To create something—a thought, an idea, an image—that wasn’t there before. There’s something thrilling about the beginning of the process of writing a new song—you’re staring at the blank paper and then the song just kind of grabs your hand and takes you along for the ride. As I’m writing, sometimes I’m surprised by where it takes me. The fun truly is in the journey.

0
1st Place "Parallel Universes" Larry Black Asheville, NC Read the winning lyrics here. What compelled you to enter this song in the lyric contest?  I had some other lyrics that...
Read more