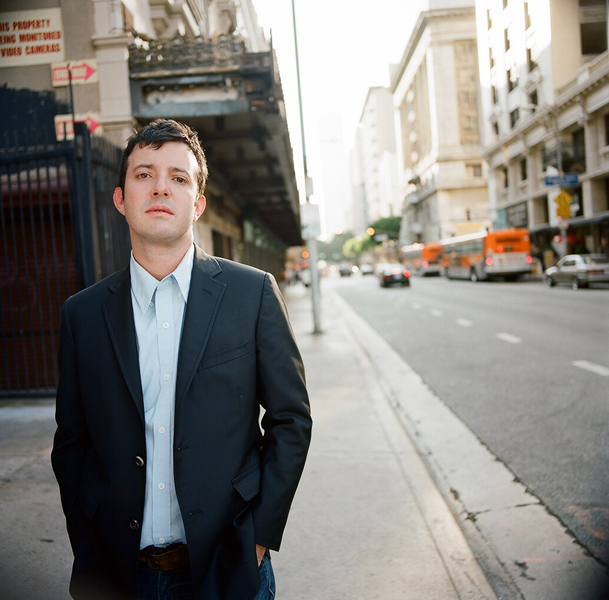 Harper Simon was back in Nashville for a Sunday night show a few months back, after initially choosing Music City as the place to lay tracks for his first solo record [2009’s Harper Simon]. With Bob Johnston, Lloyd Green and Charlie McCoy in tow, Harper created the basis for a vintage-sounding album that nods to Dylan’s Nashville recordings and The Byrd’s Gram Parson’s-hijacked opus Sweetheart Of The Rodeo. The rest of Simon’s album was finished in New York and Los Angeles, with an equally reputable cast of cohorts, including father, Paul, who co-wrote a few of the songs. After a full day of band rehearsals in Nashville in prep for the album’s supporting tour, Harper came by the American Songwriter offices to talk about recording in Nashville and his songwriting process. Listen to four tracks Simon recorded for American Songwriter and watch a video after the interview.

These tracks were recorded by Steve Martin in Nashville, Tennessee for American Songwriter.

When you came to Nashville to work on the album, did you come into the session with songs finished?

I had a bunch of song structures but the Nashville guys worked so much faster than I anticipated. In the end, it was actually good because I allowed myself to do things off-the-cuff, for instance to say [to Lloyd Green, who plays pedal steel on the album], “Hey, let’s record that one you wrote for Sweetheart of the Rodeo.” And that track ended up being one of my favorites. I booked the musicians for ten days, but I ran out of ideas after three. So I started saying, “Let’s cover this, or let’s jam on that.” I recorded 21 tracks in Nashville, a lot of stuff didn’t make the cut. We recorded a lot of covers.

When did the rest of the lyrics come?

I’ll try to be a little more prepared next time. I hardly had any of the lyrics ready when we went in to record. Instead I took the tracks away and wrote the lyrics later. I sang them in New York. I believe in not having everything be scripted.

Did any of the lyrics just come out of spontaneous singing that happened on the spot during recording?

Adam Green came down and we were recording [“All I Have Are Memories”] and he came up with, “Fine port wine, all I have are memories of her kindness.” He came up with that there while we were tracking it. I wrote the rest. Adam wrote some of the melody. He sang a scratch vocal and came up with that hook. We wrote it together. It was a crazy way to make an album, not the most efficient way.

Did you have lyrics for “Wishes and Stars”? That has such great lyrics.

Yeah, that one did but I didn’t write those lyrics. It came from a poem my friend [novelist and poet Ben Okri] wrote. I re-wrote some of it and then wrote the song off the poem.

What was the process like for writing “Ha Ha”?

It came about that I just thought it was going to be an instrumental rag. And then Fred Carter came in and we recorded it with two guitars. You know how on Nashville Skyline there’s an instrumental rag on there? It just kept going and going. Then Petra Haden did these “ha ha’s” when she was doing that vocal improvisation thing she does. My dad ended up writing over it. He was inspired by those ha ha’s. It evolved. I didn’t even intend for it to be a song. The chord changes aren’t really like a rag. They’re more like Bach or something. They’re more reminiscent of something classical. I have no idea how that happened.

Has your father been an influence or mentor on your songwriting?

No, not really. I mean, we’ve had some conversations about the process but I don’t know how I learned it. I learned it by bashing my head against the wall of writing a good song and then I finally wrote some reasonable songs in my thirties. I don’t think anyone can teach you how to write a good song. I think they can teach you to write in a genre or how to write something cliché. You can teach someone how to craft something pop but you can’t teach someone how to be an artist.

This video was edited by Kyle Byrd.

‘On The Farm’ Session With Colton Turner Features, “Who’s Blue”

0
Colton Turner, to our ears, is the rockabilly Jason Mraz. The talented songwriter brings a vibrant, while almost weathered, stylings to his...
Read more
Video Sessions

0
During the week-long hurly burly that is AmericanaFest, Ledger found the time to stop by our office to perform the song "Invisible Blue."
Read more
Video Gallery

0
Photo by Josh Cheuse In the midst of the glorious flurry of AmericanaFest, J.S. Ondara made his way...
Read more