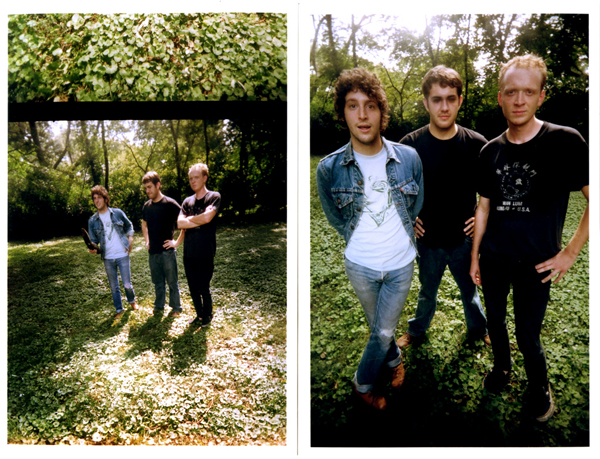 Once a quirky country outfit called the Jigsaw Mountain Boys, Shoot the Mountain approach their gritty, pop-infused garage rock with the vibrant enthusiasm of the childhood game, “Shoot the Moon,” which their name alludes to. Originally hailing from Murfreesboro, Tennessee, where band members Joe Blankenship and Jonathan Brock played together as wee lads, the youngsters “escaped” the ‘Boro and headed to Nashville. “I hit a dead end writing country songs” says wily and energetic front man Joe Blankenship, so the band shifted to creating more pop-oriented songs after the like-minded local success of their friends in How I Became the Bomb did the same. Their self-titled EP is stacked with feel-good, Weezer-esque ditties about everything from a boy born in a zoo to time travel, each brandishing the curveball intricacies of Built To Spill and early Modest Mouse. Backed by Nashville’s long-time champion of local indie rock Theory 8 Records, Shoot the Mountain bully you into spazzing out on the dance floor as you succumb to their refreshingly engaging and helplessly catchy grit.

The boys had a hard time choosing a deathbed cover, and their struggle is revealing of their dexterous musical personality. After debating between “Moon River,” “Waterloo Sunset” by The Kinks, “Sleepwalk” by Santo & Johnny, and various Righteous Brothers and Beach Boys tunes, the fellas settled on “In the Aeroplane Over the Sea” by Neutral Milk Hotel. Weary to claim it as his favorite Jeff Mangum tune (a perilous road to tread for any NMH fan) they settled on it because of its theme of death and, well, they already new how to play it. Now assembled as a “power trio,” they performed this powerful indie gem with grace.